But today that changes.

I've been frustrated by something for years and I've never said anything about it. I've suffered in silence, just hoping that it would change on its own but the problem just continues to persist. So now I say that enough is enough - it's high time someone had the courage to speak up about it. And if that someone has to be me, so be it . . .

Wal-Mart has its Enter and Exit sides flip-flopped and it drives me CRAZY: 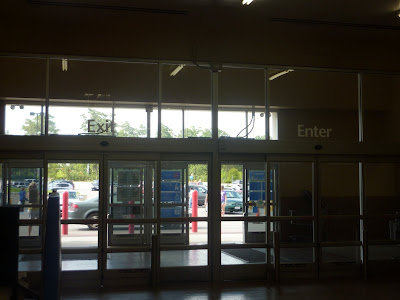 This layout forces you to walk to the left. But I was always taught that you stay to your RIGHT when you're walking. If you're on a sidewalk and someone is walking toward you, you each move to your right and pass without incident. And it makes sense because that's how we drive - to the right. It's the American way. But somehow Wal-Mart missed that memo. And without that rule, pandemonium ensues.

Plus, I'm both a rules follower and a creature of habit. So with every trip to Wal-Mart, the two sides of my personality go to battle, each seeking to assert dominance over the other. Do I follow the rules and do as the signs say, under the watchful eye of the nice greeter who hands you your shopping cart? Or do I throw caution to the wind, shake my fists at the security camera, and walk American as I was taught? It's a MAJOR decision, friends. And, either way, I'm going to run into people who have inevitably chosen the opposite way . . . I recognize the panic in their eyes as they walk toward me and I give them a knowing look of understanding as we do the "which side should I pass you on?" dance.

Like I said - pandemonium. And I can't take it anymore.

Now should I be concerned that this bothers me so much? Sure. Do normal, psychologically healthy people notice Enter and Exit signs and feel the need to write about them? Probably not. Should I stop asking questions and answering them myself? Absolutely.

So today I take a stand: Stenciled Enter and Exit decals be damned - I'm walking American and Wal-Mart can just deal with it.

Posted by Catherine at 1:18 AM

The signs at Walmart make sense because of where the registers are and the way they have it blocked off for you to go in and steer to the left. I always go in the Entrance and glare at people doing it wrong like they can't read or something. My question to you is this: When did you take this picture? I know you store things sometime for a later blog. I would almost swear that the Walmart on 242 switched their signs recently. Because I too notice weird things like that. Maybe it was another one and it through me off. But I would almost swear it was this one. See how I said almost swear twice. I am too scared to actually swear.

Did it make you a little sick that I used the wrong threw up there? Can we still be friends?