This weekend I was in the kids' musical ("Shine!") at my church. The kids have been working so hard this summer to learn all the songs, dances, and dialogue and all that hard work paid off this weekend during the two show times - they were GREAT! I stood backstage and marveled at how well they knew their lines and their cues, how quickly they changed costumes and mike packs, and how well they behaved while waiting to go back out for the next group number. We really do have a great group of kiddos at our church.

While I was standing backstage, I learned that when you have a bunch of pre-teens gathered in one area, you can't help but notice that half of them need to be wearing deodorant but they don't know it yet. The air becomes heavy with B.O. very quickly into an hour-and-a-half musical and then just sticks around for the duration. Like a big green cloud. I had to help several of them get their mike packs on and had to suck in a quick breath first before going in for the job. And every once in a while the mike pack wasn't cooperating so I had to let out my breath and breathe in again while I was entirely too close to an offending armpit. I think the hairs in my nose were singed in the process. I don't miss being 13 . . .

I played a lunch lady in the play and my costume was horrible. Check me out . . . 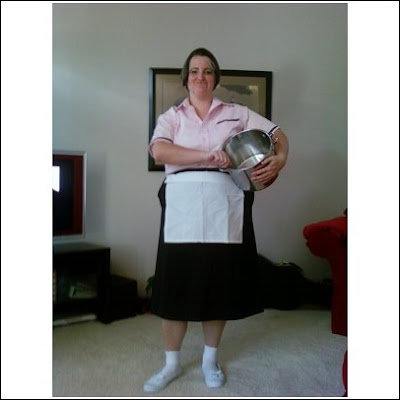 Honestly, I think that I would have preferred to have been dressed as a cow. Or an elephant. Or a sumo wrestler. Even dressing as a fat viking lady at the end of an opera would have been more flattering. I found the skirt at Goodwill and it was a homemade gem so the pockets stuck out on the sides and added a nice bulging side flank effect. I was stunning.

And the most attractive part of the costume was the hair net . . . 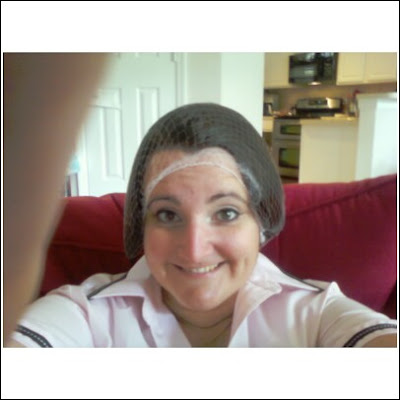 Seriously - I'm still single, people. That makes this outfit all the more inconvenient. Do you know how many people saw me like this?

And now I'm putting pictures of it up on the internet.

Hmmmmmmmmmm - didn't think that one through very well . . .

Very funny.....especially about the being 13 & the whole deoderant issue! Great musical and a superb performance by the Lunch Lady!!

You are such a trooper Catherine.

I Love the costume! Wish I could have seen it. I am sure you did superb! Did you have a singing part or speaking?

Should you ever decide to do eHarmony, I think you have the perfect profile pic! ;)

I mean- at least you sounded good...