My roommate Melissa and I went to the grocery store the other day and had to get some rice noodles from the foreign foods aisle. So we walked over that way and, while searching for the rice noodles (which, incidentally, were on the bottom shelf), we found this little gem: 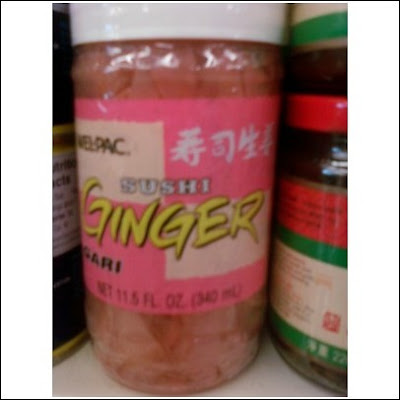 We picked up the jar and marveled at how disgusting it looked. "Why would anybody eat this?" we asked ourselves. Sure, the jar says it's ginger. But I'm not altogether convinced it's not the innards of some animal. Seriously . . . why on Earth would anyone purchase a jar filled with a pink, fleshy substance from the foreign foods aisle?

We decided to explore this aisle a little more to see what other joys it held. We looked for more in the Asian section and found some real winners. For example, we found what might be the worst possible snack I've ever heard of: 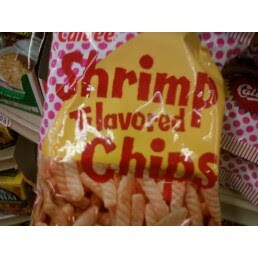 Seriously, if they serve snacks in Hell, there are bags and bags of these there.

And they serve this there, too: 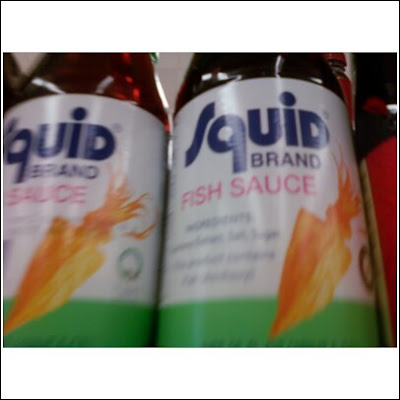 Fish sauce? Seriously? I cannot imagine any purpose for this product that would make it okay.

We headed over to the Hispanic section of the foreign foods aisle and found one item of interest: 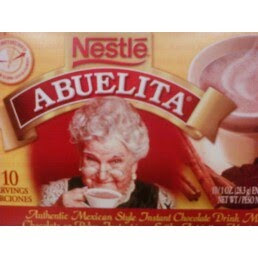 This might be the most terrifying abuelita I've seen. I'm quite sure I could NOT relax over a cup of hot chocolate with her looking at me like that.

Over in the Kosher section, we found another fish product that made me throw up in my mouth a little bit: 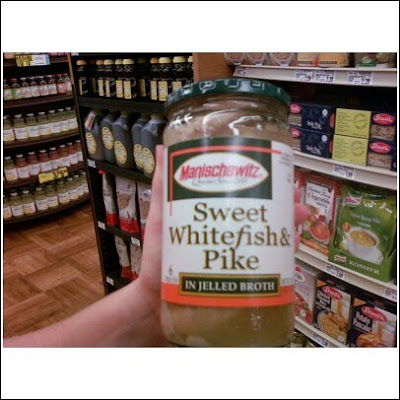 Can I be honest with you? Even though I hate fish, it's not the fish that disgusts me. And it's not even the fact that it's fish in a JAR. It's the fact that it's in JELLED BROTH. I kinda get grossed out when I open a can of chicken noodle soup and the broth is a little congealed. I can't imagine using that as a selling point for a product. Frankly, it's disturbing.

Another kosher product I will never try: 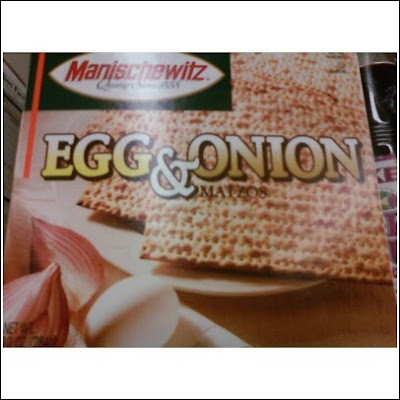 Wow. Hats off to the good folks at Manischewitz for tackling the problem of how to spice up these little cardboard-esque crackers. They went for a real unorthodox angle - no pun intended. Honestly, I don't know which would be worse - these or the shrimp flavored chips. It's really a toss up for worst snack idea EVER.

Ok, now this is just taking the Whole Grain craze too far . . . 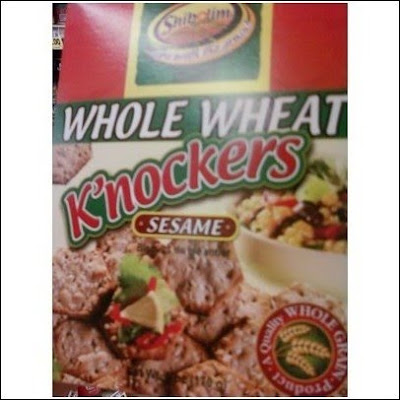 Then we wandered on over to the British section and "spotted" a traditional English snack: 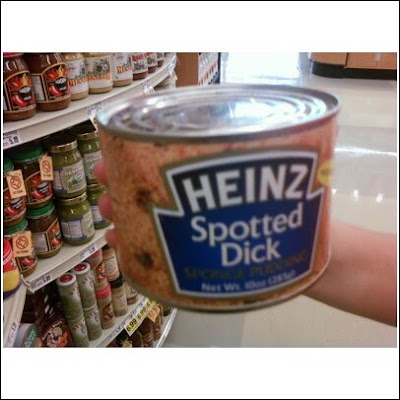 As a self-proclaimed prude, I see this type of thing and thank the Lord we won the War. Our Founding Fathers saved me from a lot of blushing . . .

So that was all we found. In our search for interesting products, we learned a lot about the foods of other cultures. Well, really, we learned just enough to raise a lot of questions. In fact, back in the Asian section, I found one product that summed it all up for me . . . 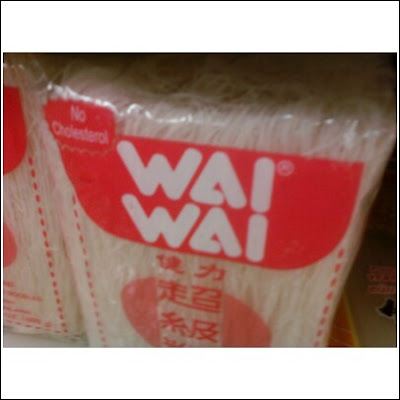 Call me close-minded but I'm so glad I live in a culture of hamburgers and french fries and Swiss Cake Rolls. And, after my little exploration of the foreign foods aisle, I am now endlessly grateful to be a part of culture that's free of spotted dick and wheat knockers.

Well, Spotted dick is a steamed suet pudding containing dried fruit (usually currants), commonly served with either custard or butter and brown sugar --per Wikipedia. But the idea of it being canned grosses me out.

Fish sauce is used similarly to soy sauce, as just a splash in many oriental, (oops) east Asian sauces. You've heard of duck sauce, no doubt, which I'm pretty sure is not from ducks, but meant to accompany them.

On that note, I miss the word Oriental...does anyone else? I realize it was dropped because it was too Occidentally ethnocentric, but it was never a "bad" word. But then, I'm not offended by being called a "cracker" or "gringa" either. :-)

Catch, that was GREAT!! Loved the 'unorthodox' pun in particular. :) Do more of these

I actually grew up on half the stuff you made fun of. Thanks for alienating me.

Ok, Andy that just cracked me up! I would never alienate you . . . unless you had shrimp chip breath.

Oh my lord. I am crying- can't even friggin see the screen because I am laughing so hard...