I met some friends at Rico's last night for dinner. I know that I need to move on but I just really miss the creepy little villagers. As good as the food is, Rico's just isn't the same since the genocide.

I arrived at the restaurant with a VERY full bladder so I dropped my purse off at our booth and headed back to the restrooms. I noticed that, as I was walking back there, I was kind of sulking because there's no bad art to look at. It's such a bummer. But then, I looked up and saw this: 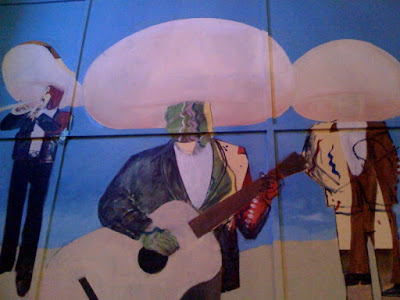 I'm not really sure what's going on here. Are they re-painting their faces? Was the artist taking a stab at impressionism? Did these musicians scratch their faces off when the Ring girl from the creepy village looked at them? I don't know. What I DO know is that this sight lifted my spirits and I continued my walk to the restroom with just a little more pep in my step.

I rounded the corner and found myself standing in front of the ladies' room and, glory of glories, look what greeted me there . . . 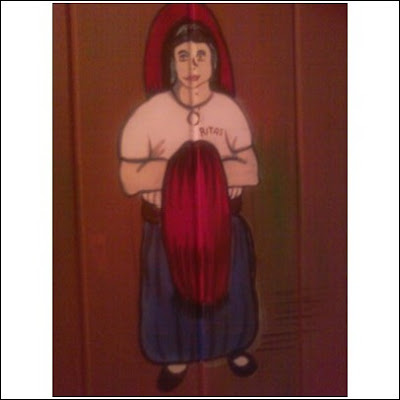 A genocide survivor!!! I love her!!! I shall call her Panchita. I love her thick waist, her low belt, and the apparent elastic at the bottom of her skirt. I'm not sure I would have gone with the red hair extensions but to each his own. And she's serious about them - she's got a spare set of extensions ready to go. I was a BIT disturbed about her bulging forearms and her swollen right shoulder. And what looks like an Adam's apple on her throat . . . That's when I double-checked to make sure this was the LADIES' room.

And that's when I saw Paco: 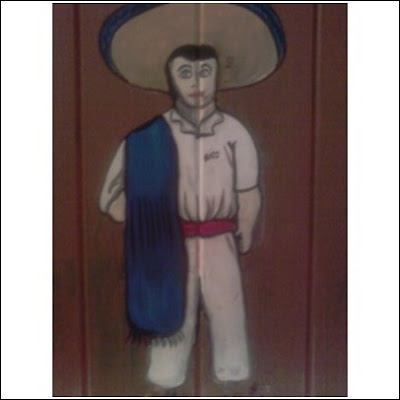 Thank goodness for Paco's thick neck! I mean, how else would he hold up that massive sombrero?? Those things are heavy . . . it's hard for me to hold my head up just long enough for them to put whipped cream on my nose on my birthday. I can't imagine how Paco does it day in and day out. Then I noticed his arms. Sure they're bulging but they're freakishly short and I don't really know how he manages to lift the sombrero up high enough. 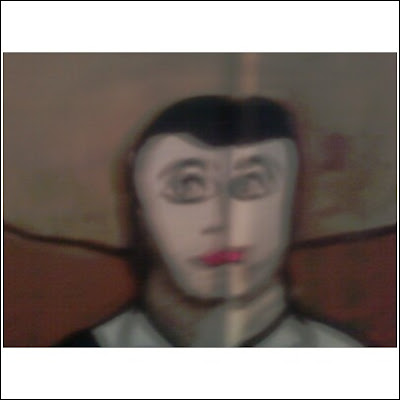 Now, I admit it's not the best picture in the world BUT you can still see his face. It's as if he's trying to avoid eye contact with whomever is opening the men's room door. Like he's thinking "Maybe they won't notice me here." Or it could be that, when the door opens, Paco has a clear shot of the urinals and he doesn't want anyone to think he's a perv. Makes sense to me. But I must confess that I'm concerned about the shocking pallor of his face. Perhaps he just realized that Panchita might be a man?

P.S. We better call NEWS2HOUSTON, 'cause this is better than the image of Mary I saw in my tortilla!

He DOES look like MJ!! And, yes, we should call News2 Houston . . . they need to know about Our Lady of Tortilla!

I can't believe you didn't comment on the fact that Panchita obviously just scalped some poor redhead. Now we know where she gets her red hair extensions! What did redheads ever do to her?!?!?