Recently, I had lunch with my mom and some friends at an Italian restaurant in The Woodlands called Grotto Ristorante. In Grotto, there is a colorful mural on the walls that starts on the walls by the bathroom and wraps around the entire restaurant. I've eaten there several times, but have never really paid close attention to what is depicted in the mural. On this recent visit, however, I took a closer look.

Title: "Do I smell something next door?" 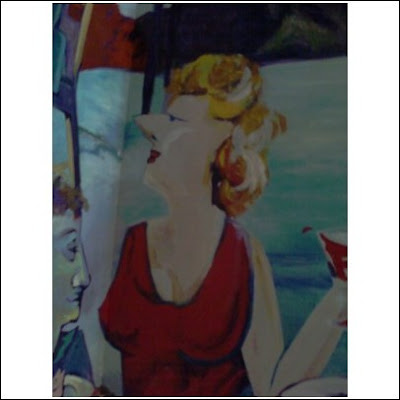 Hands down - this lady has THE worst nose I've ever seen. I'm quite certain she can smell things from 3 miles away. Whenever I am unhappy with any body part of mine, I will remember this lady and thank the Lord that He spared me in the schnoz department. And what's going on with the guy on the left? He needs a blood transfusion STAT. I bet that lady is jealous of his nose. I think the artist was sexually frustrated here because of the phallic nose and the cleavage shot. 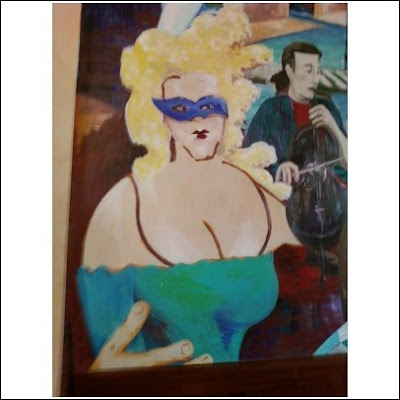 If my head is ever that small compared to my boobs, please shoot me. And please shoot that guy who's trying to cop a feel. Artist: sexually frustrated . . . is there really any question on this one? 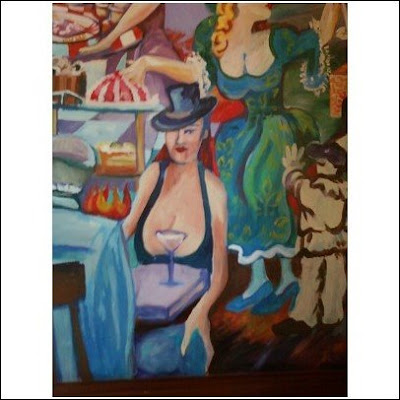 I don't know what's worse - her dress or her hat? And if this lady ever tries to give me a high five, I'm gonna politely decline . . . check out her hand. That thing could hurt someone if used irresponsibly on a high five. And what's going on with the other lady and the perverted little man? Artist: sexually frustrated . . . 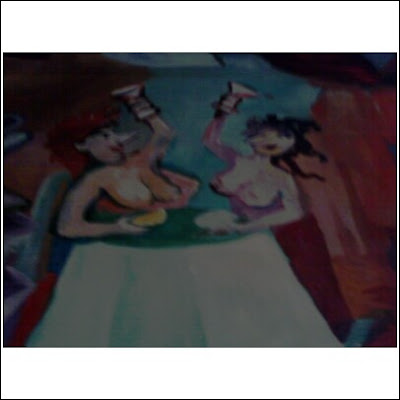 Seriously, guy? You need to see someone about this. 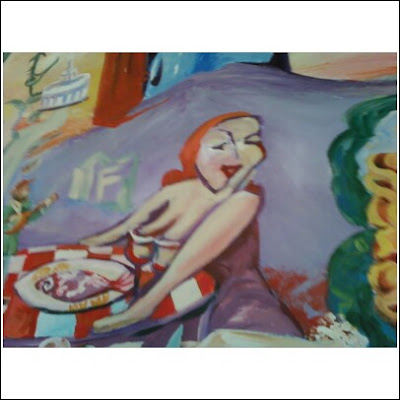 Apparently, the artist was so focused on his . . . ummmm . . . frustrations, that he forgot to paint fingers for her. How is she supposed to eat her fish? Well, I guess if you need someone to help you eat, that's the way to get volunteers . . . 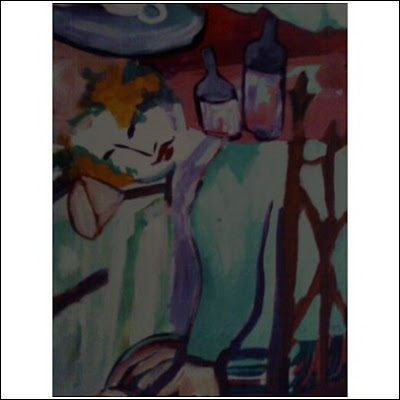 I think the artist was just trying to paint a drunk clown who is passed out at a restaurant . . . who hasn't, right? BUT I think he was too drunk himself to pull it off. Instead, it looks like a beheaded clown with green blood dripping down the table cloth. Artist: drunk and very possibly high. 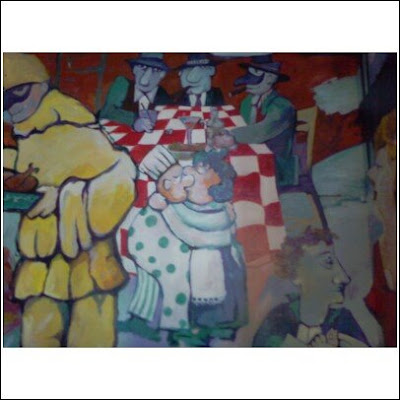 This is a depiction of a scene we're all familiar with: a chef and his wife make-out while the Mafia looks on and a masked court jester sneaks off with the dinner. Ah . . . classic. Artist: high as a kite.

Title: "We've GOT to start eating at another restaurant." 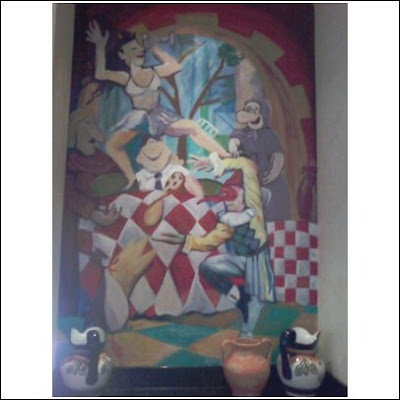 Wow. Where do I start? I count 3 phallic noses, 1 peeping pervert, 1 table dancer, 1 court jester dancing around the table, and one of the characters from Popeye in the right corner. This artist has some serious problems. 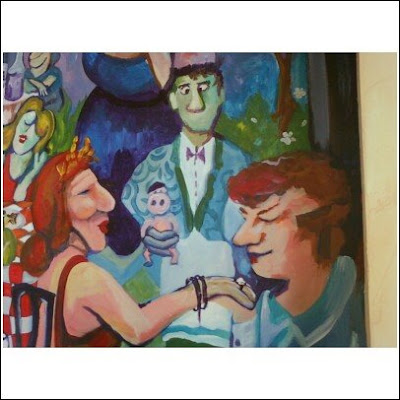 If get upstaged on MY engagement night by a green, mouthless, cross-eyed waiter holding a pig-baby wearing a toupee, I'll be SO mad. Artist: needs to check into some sort of substance abuse program. 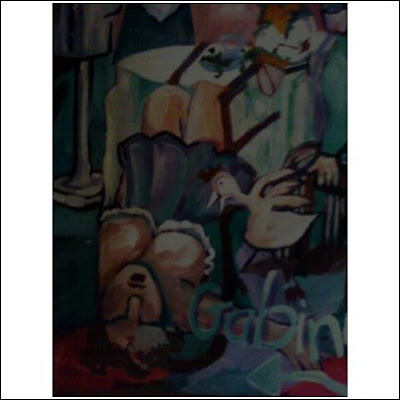 Why is this girl passed out? Why is she wearing a french maid's outfit? Why is there a chicken looking at her? Why is the clown beheaded? I think it's obvious folks . . . the artist is three sheets to the wind. And frustrated. 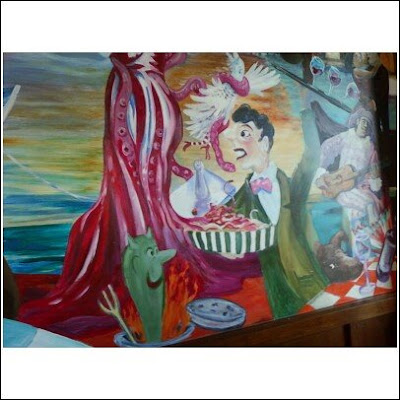 I really don't know what's going on here. There are so many things that I don't understand - the dog peeking out from behind the waiter, the snake around the bird, the guitar player in the background, the horned alien popping up from a firey manhole with a pitchfork . . . Am I high? No - the artist is. BIG TIME.

My mom and I went around the restaurant taking pictures and hoping that the manager wouldn't kick us out for doing so. We went back to the table and laughed at how strange and ridiculous that mural was . . . who the heck comes up with that stuff?? What was his "inspiration?"

And then I saw where my mom had chosen to stow her cell phone . . . 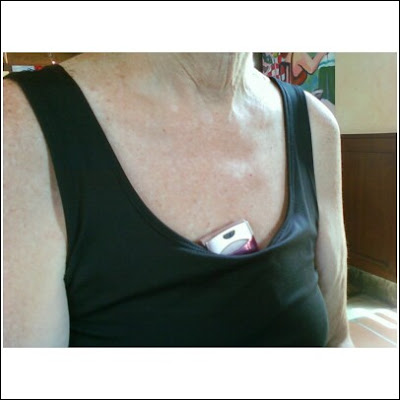 And I knew we had to get out of there STAT.

Before someone started to paint her.

Hysterical!! I can't really even break that one down to favorites....just all around HYSTERICAL!!

What is up with all the crazy murals in The Woodlands? Seriously, I can't think of the first restaurant in North Alabama with such paintings on the wall. This painter might be more hilarious than the first 2 you've shown!

I was going to make some witty comment....but words fail me.

oh my gosh...i was laughing so hard, but then the pig baby with the toupee completely sent me over the edge. I could hardly read through the tears! HIGHlarious!!

Vintage Catherine! Right up there in the top 10!

I think I will make it my personal mission to find bad restaurant art! Apparently, it's not as difficult as one would think . . .

Oh my gosh- that was hilarious!! I needed a good laugh...you're brilliant girl!
jessica

Pizza and all other drinks have been implemented for the success of the humans. All the timely solutions have even marked for the provision of pizza for the fulfillment of the appetite of the hungry people and ladies.