I thought that today, in honor of the closing of the 2010 Olympics, I would give my final thoughts on some of the sports and happenings that I didn't really get to talk about with y'all over the last two weeks. So here you go . . .

I have two things to say about the Alpine events.

First, I am so glad that I don't have to hear Lindsay Vonn talking about her injuries anymore. I mean, I know she was injured but come ON. Aren't athletes of a certain caliber supposed to grit their teeth and fight through it without complaint? Like Keri Strug did? And I've never heard of an Olympian who is so stinkin' accident prone. C'mon, Lindsay . . .

Second, is there some reason that the Olympic committee decided to use mug shots for all the skiers in their profile shots: 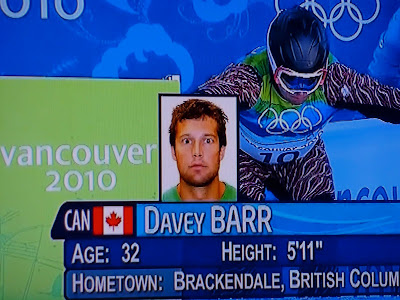 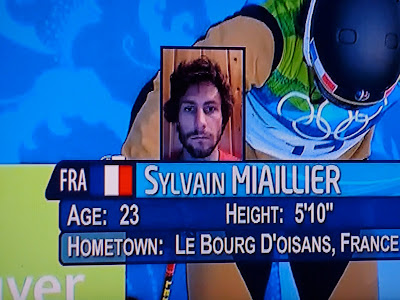 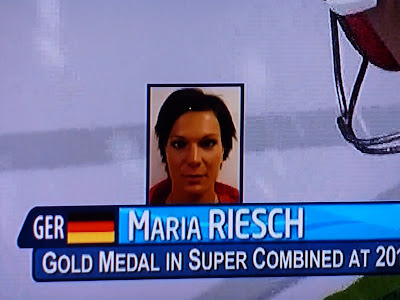 I mean, couldn't someone have given them the heads up that these pictures would be shown on international television? How embarrassing.

I don't know what's worse: seeing that the bobsledding uniforms leave absolutely NOTHING to the imagination . . . or having your mother point that out to you.

I already blogged about the back of the Canadian speed skating uniform. I didn't think it could get any worse than that.

Until I saw the front of it: 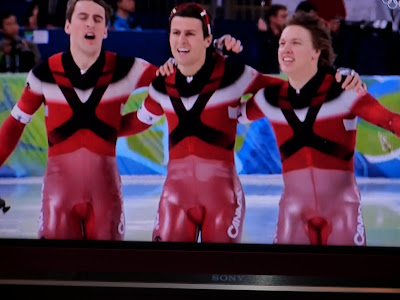 Seriously, Canada - this is a family show.

Good Lord . . . I feel like the Olympics have a made a woman out of me.

I have to say that the first two nights of Ice Dancing made me want to bash my head into the wall - it was so boring. And I just found myself getting mad that I was watching an Olympic event with a move called a "Twizzle." Seriously? But then came the free skate and I ended up loving it.

Aaaaaaaaaaaaaaand added "Must be able to pick me up and spin with me on his shoulders" to my list of must-haves in a husband.

I didn't get to watch any curling but I really wanted to. Something about this sport fascinates me and I want to understand it. Mainly because I want to understand why they need alternates on their team. I mean, really - what kind of injuries do these players really sustain? Broom burn? I want to know it all. 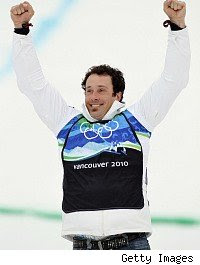 I think we'd make a perfect couple. We have so much in common. For instance, he looked awesome in the new denim ski pants for the snow board cross and I enjoyed rewinding my DVR to admire him in them. He lives in Sugarloaf, Maine and, although I don't know what it is, I'm pretty sure I'd like to eat a sugarloaf. He likes competing in winter sports and I have a winter complexion.

See? Match made in Heaven.

Did anyone see this? There is no more awkward sport in the Olympics. You take the normal luge aaaaaaaaaaaaand you put another guy on top of the first guy. Like so: 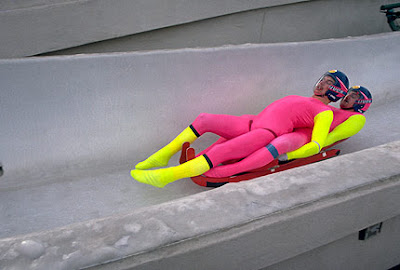 You have to be secure in your masculinity to compete in this sport. And you have to be more mature than I to watch it.

I think that the bad economy has the NBC Statisticians sweating because they were working overtime during this Olympics. They were absolutely pelting us with stats this year. The most decorated Winter Olympian. The most decorated U.S. Male skier. The first World Champion to win Gold at the Olympics since Scott Hamilton. More medals by the age of 25 than any other female speed skater. And they just kept on going. And they'd get really specific - I half-expected them to say something like "She now has the most medals of any brunette female winter olympian with a Russian coach."

You know my summary of the Olympics wouldn't be complete without me criticizing the way people worded things. Here are a few of my favorites:

"They LITERALLY started on the same second just two seconds apart." That is LITERALLY impossible, buddy.

"This is a dream coming to come happen." Ummmmmmm . . . what? Why don't we let you catch your breath before we interview you . . .

"Trohpy Stats." These are apparently not spelling bee trophies . . .


And so they're over. Just like that. I can feel myself spiraling into a deep depression slowly but surely. My life will not be the same without 10 hours of exciting competition to watch every night. Without Bob Costas. Without my steady obsession over clearing space on my DVR every night so that I don't miss anything the next day. Without crying at Visa commercials and great Olympic moment montages. What will I do?? How will I live??

I guess I just have to go back to "having a social life" and "not living vicariously through other people" and "conversing with human beings."

So many things in this "report" made me laugh out loud that I couldn't even begin to pick a favorite, but those Canadian uniforms sure have kept us laughing! I will miss your reviews and can't wait until 2012!

Double luge. Weird. Awkward. Hot pink and yellow. I just can't do it. This ending summary was fantastic!

I was laughing and laughing at this one. I love the stats and the canadian uniforms again. Oh man, I loved it all!!

Good stuff Catch. Too funny. I half expected you to say you didn't know what a sugarloaf was but you were sure you would like it! And the Double luge? Hello "Ambiguously Gay Duo"!

Well, there are finally going to be new episodes of all of my favorite TV shows. The Oympics put a real crimp in my schedule.

Thanks especially for the Favorite mess-ups part. That was my favorite!

Diana, I had almost that exact same thought today as I was driving! That would have been way funnier! So I changed it!! Shhhhhh - don't tell anyone! :)

I just read this post again! You are so funny Catchy! Those Canadian outfits really are bad.