[Side note: Sooooooooo out of nowhere, my comment feature stopped working. And I can't STAND going without comments from y'all so thanks for the texts and emails in the interim! I think I've fixed it now so comment away!! Now back your scheduled programming, already in progress . . .]

I was driving on the highway the other day and got a text from a friend. I don't like to text while I'm driving so I called her to answer her question rather than trying to text a response. She answered the phone and so I explained to her that I was calling because I was trying to be safe. And then I changed lanes and saw that the truck I was following was apparently being driven by the headless horseman: 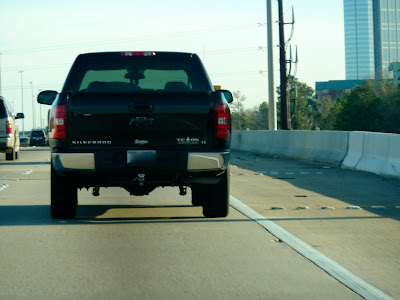 And then I drove 70 miles an hour while trying to take a picture of it.

Or driven by a midget.

This made me laugh out loud because I was half expecting to see a horse somewhere in the cab of the vehicle! I love that you had to try to take a picture of it!

CRAZY Houston drivers!
and how safe that you took a pic at 70mph. LOL
BE SAFE!