I read a series of articles the other day about how some designers used "curvy" models on their runways during the recent Paris and Milan Fashion Weeks. As I love a good Swiss Cake Roll and the way "Can I add bacon to that?" rolls off the tongue, I was intrigued by the headlines. I clicked on the articles and read about how some forward-thinking designers are switching to the use of "curvier" models because they are finally realizing that the anorexic-heroin-addict look hasn't really caught on like they thought it would. For a moment, I really admired the fashion industry for finally accepting that the rest of the world has some meat on its bones.

Then I saw the picture of the "curvy" models: 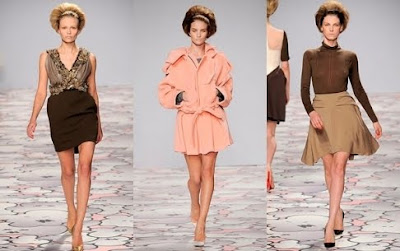 Really? You know, one good rule of thumb to keep in mind is that, in general, if your knee bone is wider than your thigh, you are not "curvy."

And another rule to remember is that putting on a XXXL robe doesn't get you into the "curvy" club, either. 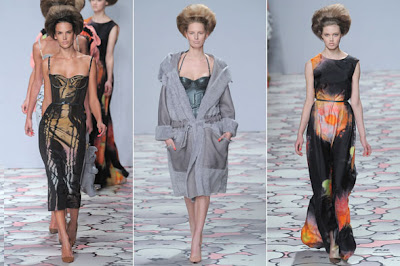 I don't get it. I mean, I get that these models actually have figures but why all the hype? They don't look THAT different. Nope - I just don't get it.

And, incidentally, I don't get why all these women appear to have put their hair back in the "I'm about to wash my face" hairstyle. But I guess that's why I'm not a fashion designer.

All joking aside, I do appreciate that they really are using models who have waists and busts and who don't suddenly make me feel like I need to give to the "Feed the Children" campaign. So I'll give kudos for that. But they would choke on their cigarettes and uppers if they knew my definition of "curvy."

Some designers looked like they got the "Let's use curvy models this year" memo AFTER they had already tailored their clothes for the malnourished models: 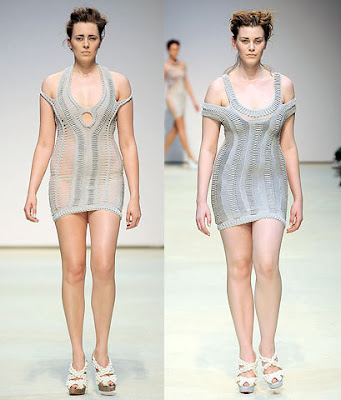 I don't really know what's happening here. And I don't think she does, either. 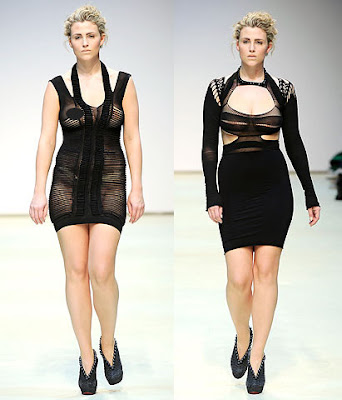 Seriously? Why are they doing this to this poor girl? Is this like model hazing or something? Are they trying to make an example of her? 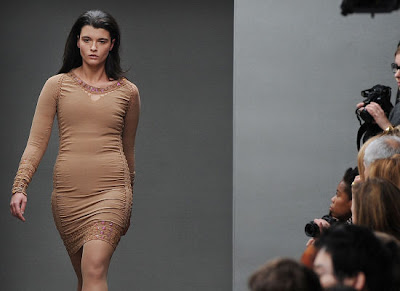 Wow. If this wasn't the "When 'Spanx' Go Wrong" part of Fashion Week, I really don't know what to tell ya. 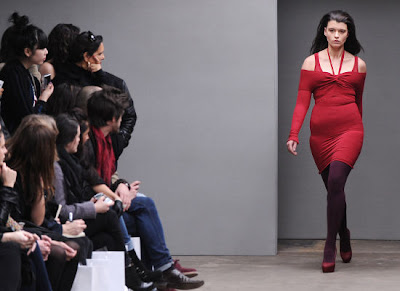 Honestly, I don't know how her underwear hasn't cut off the feeling in her legs yet.

Ah the fashion industry - always good for a laugh.

These Fashion Week articles reminded me of another article I read a while back - it was about an Olympic athlete who had recently put on 10 pounds and how the additional weight was making her a better athlete. But the article made me roll my eyes by saying things like how we wouldn't even recognize her as the person she was before and how the new weight had turned her into a completely different person.

Seriously? 10 pounds? 10 pounds usually just makes me cuss - it doesn't turn me into a different person. If it did, I'd have multiple personalities by now.

omg, the model hazing was my favorite!! Although the ending was brazilliant too!!

There were so many things in this blog that made me laugh out loud. I couldn't pick my favorite. There were too many!!!!!!!!!

Yep this is def one of my favs... I'll have to go with the WHEN SPANX GO WRONG moment as my fav. LOVE IT!!! :P