I've never considered myself a klutz. I mean, I'm not someone who falls a lot or runs into things frequently - I'm really fairly coordinated. But lately I've had some trouble on the steps in my house. I don't know why this is happening but it's troublesome. It's not like it's unfamiliar terrain or anything - I walk on these steps all the time. I know the ins and outs of them. I have no excuse.

I have a staircase that leads down to a foyer. If you're coming down the stairs, you would step down into the foyer, take a few steps forward, and then take two steps down into the dining room or living room. It looks like this: 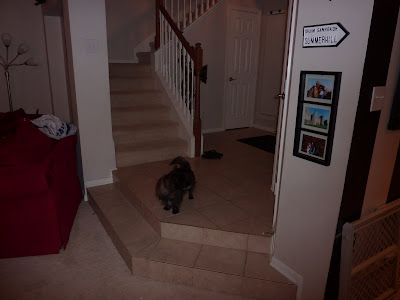 It's really fairly easy to navigate.

A few months ago, I was walking downstairs and my roommate Melissa was sitting at the dining room table, working on her computer. As I was walking, a funny thought occurred to me so I made some loud announcement to call attention to myself like "So . . . I just had a funny idea . . ." and, she looked up at me so that I could continue with my hilariousness. I don't remember what ground-breakingly funny thing I was going to say but I know that the timing of it all just could NOT have been worse. JUST as she looked up, I missed a step and went tumbling down the remaining five stairs and spilled out onto the foyer. But I didn't stop there. I had gathered quite a bit of momentum as I tumbled so, when I hit the foyer floor, I kept rolling and then rolled down the foyer steps into the dining room. It felt like I was falling for a good five minutes. Seriously. I just kept going and going - like a brunette indoor snowball. Melissa must have yelled "Oh! Catherine!" five times in the time it took me to finally come to rest on the dining room floor. Luckily, nothing was broken so we just laughed and laughed.

I would so much like to report that it was an isolated incident. But, unfortunately . . .

The other day I came home and no one was here but my dog. He was sitting on the dining room floor looking up at me in the foyer as I walked from the front door toward the dining room. Just as I reached the edge of the steps that lead down into the dining room, I slipped ever so slightly. Not much, mind you. But enough. Just enough. Somehow the slip caused both of my feet to fold over the first step down from the foyer. I had heels on so they caught on the edge of the step and acted like hinges, keeping my feet locked onto the first step as the rest of me went flying forward. I felt like everything went into slow motion. My arms were flailing, my eyes were bugged out, and I was yelling "Crapcrapcrapcrapcrapcrap!" as my dog scrambled out the way. I felt the toes on my right foot pop and then my left ankle popped and then my knees hit the dining room floor. My upper body fell forward and I landed face-down by my dining room table. I laid there for a second, barely moving and convinced that I had broken something because I had a lot of pain in my ankle. I wasn't really sure what I was going to do if I had indeed broken my ankle but I began to imagine myself having to do an army crawl out to my car so that I could drive myself to the hospital. It would have made for an awesome story. One that I could tell for generations to come. But then the pain subsided and I moved my ankles and could tell that nothing was broken. That was a relief - I'm really terrible at army crawling.

I laid there for about 10 minutes and then decided that I should stand up to make sure that my ankle felt okay with some weight on it. That's when I saw this: 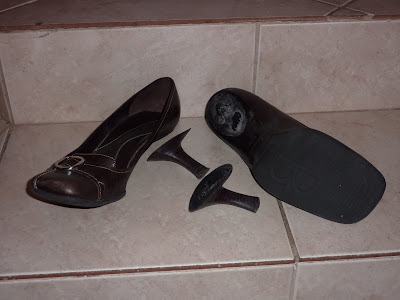 It had ripped the heels off of my shoes. BOTH SHOES. I'm telling you - this fall was epic.

But I think that the most important part of the whole thing was what I learned about myself through the first thoughts that popped into my head as I landed like a sack of potatoes in the dining room. I mean, don't you think you can learn a lot by thoughts that involuntarily pop into your head in moments like that? I do. I think they can reveal a lot about your character and your priorities. My very first thought in that moment wasn't "Thank you, Lord, for not letting me land on my dog" or "Thank you, Lord, for not letting me hit my head." Nope. My first thought was "Oh good - now I don't have to work out." Aaaaaaaaaaand that thought was immediately followed by "I should make some movement so that if anyone was watching me through a window, they'll know that I'm okay."

Just thought you should know that about me . . .

I decided on my lunch break today to read some of your blogs as they always make me laugh. This one was exceptional! I'm sure people were walking by my office wondering what in the world I was laughing at. I'm not sure what I loved more - (1) your army crawl day dream, (2) your shoe picture (taken while you were still immobilized by your fall, or (3) your initial thoughts of not needing to work out. This was too hilarious! :) Not that I wish you were to fall again...but it would be another funny blog....just saying...
Sonja