I had to drive to Dallas a couple of weeks ago for a deposition. On our way back to Houston, my trial partner and I decided to stop for dinner at a Mexican restaurant that's about halfway between Houston and Dallas in a little town called Fairfield, Texas. I've been to Gilberto's before and thought it was pretty good - especially when you consider that it's located in a small town. But I've never noticed this sign before: 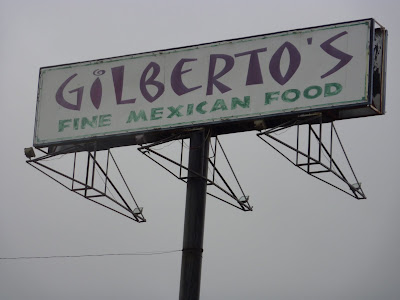 I have to tell you that, as much as I like the place, I take issue with the use of the word "fine" . . . unless they're using it as a synonym for "okay" or "acceptable" or "passes health department inspection." I mean, I don't think a restaurant can be considered "fine dining" if they use store-bought flour tortillas for their tacos. Right? I don't think it can be considered "fine" if the napkins are paper. And I certainly don't think it can pass as fine dining if it has a drive thru: 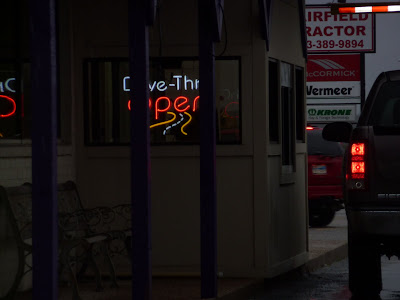 Yep. I'm pretty sure that once you throw a window and a neon sign on your restaurant, you have to be honest with yourself and stop pretending to be something you're not. Just embrace what you are and edit your sign to read something more honest like: "Gilberto's - Better than gas station food." Or "Gilberto's - It won't make you throw up." Or even "Gilberto's - It's pretty much the only option you have for the next 100 miles."

In the meantime, if you find yourself between Dallas and Houston and your stomach starts growling, stop by Gilberto's . . . It's fine.

I have never noticed that either OR the drive thru window. I would rather fill up on doritos and beef jerky than eat there....YUCK!!