A full-bodied blog with a hint of sarcasm and black pepper.

Over the holidays, I went to a party over at a friend's house. Before heading over, I asked my friend if there was anything I could bring with me and he said that, yes, I could bring some wine with me if that wouldn't be too much trouble. "Sure! No problem!" I said and headed over to the store to buy a couple of bottles for the party.

Now, I'm not a wine drinker and have no idea what kinds of wine are good and what kinds will make wine drinkers look down on me for buying. Normally, I would just have the person I'm buying for tell me EXACTLY what to get so that there is no question that I will show up with a bottle that everyone will find acceptable. But I forgot to ask my friend this important question and didn't want to call him back and reveal my ignorance and lack of wine-choosing confidence when he had put so much faith in me. So I would do this on my own.

I marched confidently into the store and over to the wine section, determined to pick the best bottle of wine that anyone ever brought to a party. But I soon found myself rooted to the ground, dry-mouthed, and trembling slightly in front of the aisles upon aisles of wine bottles from floor to ceiling. I had no idea where to begin. I looked up at the signs that read "Spain" and "France" and "California" and wondered if that was someone's idea of being helpful. Were they mocking me??? I began to sweat - how on EARTH was I supposed to know which one to choose? Then I had a brilliant idea - I would call a friend of mine who likes wine so that she could just tell me a good bottle to get. I dialed her number and, to my relief, she answered. I explained my predicament and she quickly named off a few brands that she knew were good ones. But, alas, as is my luck, I could not find the wines she suggested. So she gave me a tip: just read the labels and buy what sounds good.

I could do that. What's so hard about that? I hung up the phone with my friend, squared my shoulders, and picked up a bottle to read its description: "This is a classic expression of Burgundian Pinot Noir, with a refined, aromatic nose of ripe red berries and toasty, earthy nuances leading into an elegant palate of delicately structured tannins and a clean finish."

That's when I got angry.

Burgundian? Toasty, earthy nuances? What does that mean?? How does that help me? I became aware of my face: it was screwed up in a half confused/half irritated look that was bound to give me away as a wine moron. I nonchalantly put the bottle back on the shelf and looked around to see if anyone was watching me. I muttered "Mmmmm. That sounds delicious. I love earthy nuances. But not right for toniiiiiiiiiiiiight . . ." and then sighed sadly.

I picked up another bottle and read: "This Cabernet Sauvignon has aromas of cedar wood and caramel with soft notes of violets and lavender. Ripe black cherries are on the palate with hints of herbs de Provence, cocoa, tobacco, and oak framed by moderate tannins." For the first time in my life, I felt like I might need blood pressure medication. I mean, what does "soft notes of violets and lavender" even mean? And tobacco? Herbs de Provence? Seriously?

And thus began one of the most frustrating experiences of my life. I looked at wine bottle after wine bottle and found the descriptions to be less and less helpful. For instance . . .

Sometimes the wines were described as if they were an opera or a symphony: "opens with aromas of dark cocoa" or "enters the mouth with subtlety and then builds in silky texture, concentration, and power."

At other times, they were described the way someone would describe a blind date to you: "a polished and approachable Syrah" or "a striking and complex wine" or "fleshly, luscious and decadent." Fleshy? Really?

And still others made me blush: "a luscious expressive wine with a supple mouthfeel and soft finish."

I read label after label, wondering if a "blend of chocolate and oak" was supposed to be a good thing and what "coherent complexity" really meant. I was just about to give up when I ran across one that gave me hope:

"This Cabernet Sauvignon exhibits enticing aromas of toffee, black cherry, and currant." Finally! This is a wine I can relate to! I started to get excited and read on: "Balanced tannins underscore core flavors of black cherry, black berry, and currant . . ." Okay! Getting better! I love black berries! I read on: ". . . interlaced with roasted coffee bean . . ." Huh. Okaaaaaaaaaaaaaay . . .? ". . . and hints of black pepper."

I gave up at that point. I realized then that I would never be a wine connoisseur. Especially because I can't spell "connoisseur" without using spell check. And, frankly, I don't think even wine connoisseurs know what half these descriptions mean. I think they just stand around and make stuff like "soft notes of violet" and "coherent complexity" up to sound fancy and like they MUST know what they're talking about. I think I could create my own line of wines and write made-up descriptions like "soft hints of grass and sun-kissed lilacs caress the tongue before giving way to the stronger flavors of pine needles and mud" and people would buy it. And then they'd stand around at parties and say "Mmmmmmm . . . I can really taste the pine needles now." I think I'd call my brand of wine "Puh-leeeeze" . . . . . . because it had a fire-breathing bear on it and that was pretty awesome to me. 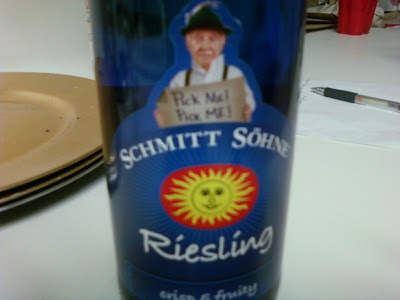 . . . because the little guy on it was waving and saying "Pick me! Pick me!" And that was the most help I'd had all night.

Absolutely LOVED this!! Probably my all-time favorite.....especially loved the way you wrapped it up. A perfect 10!! This should be in a newspaper

I thought the bear was throwing up noodles.

Laughed out loud when I saw the fire breathing bear. Not sure I would want to taste something that makes you breath fire. Or gives you breath as bad as that. I'm with you sista on the lack of wine buying skills.

It looked to me like the bear was spitting out fish. Tasty.

However, I can tell you that both of the wines you picked were sweet wines.:)

I thought the bear was projectile vomiting, too!! Which is REALLY the reason I bought it . . . :) But then I saw that they were flames and thought that was cool, too.

catchy catchy catchy...i LOVED this one. my favorite party was DEFINITELY when you said that you love earthy nuances, but not right for toniiiiight!!! PURE. COMIC. GENIUS. :) oh and calling your wine puh-lease was awesome too. what else?? so many things had me laughing out loud on this one...I'm with Tamza that this should be an article. it would be hilarious..so many people can relate. Not me of course, because I'm like super smart about wines...especially the ones in boxes or little mini 4 packs

I had a friend who once told me you can't really go wrong if the bottle costs $10. Doesn't seem like much science behind that, but for some reason I use that advice.