I spent the weekend in the Hill Country, between Hunt and Ingram, Texas. On Saturday, we decided to see what treasures the stores in Ingram held so we piled into the car and headed to town. After about 5 minutes in the back seat, with no A/C circulating to me, I contemplated throwing myself out of the car so that I could at least feel the breeze as I flew through the air. But we arrived at the shops just as I was opening the door, so I was spared.

The first shop we went in belonged to a woman I like to call "Don't Touch Any of My Things" Lady. From the moment we walked in, she followed us around at an uncomfortably close range. She was right behind me or right next to me but always RIGHT there. When someone else came into her shop, she would go see them and then come back to where we were. I guess she thought that we wouldn't be able to resist the creepy doll heads, the beetles preserved in the middle of a block of plexi-glass, or the shell lamps circa 1985. I was half-tempted to put my purse under my shirt and act like I was trying to smuggle something out just to see what she would do. But I wasn't sure that I wanted to spend the night in the Ingram jail so I didn't.

The next shop we went into was a bit scary. It seems that shop owners in the Hill Country have an affinity for strange mannequins/statues. This store was no exception. Upon entering, we were greeted by this life-size statue . . . 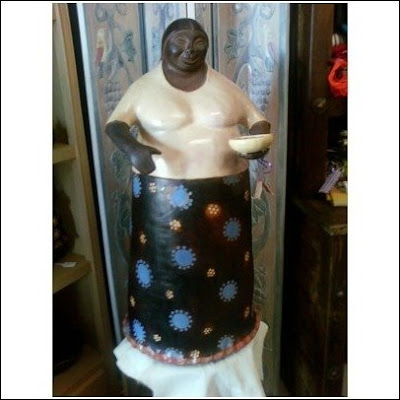 This might have been better suited for a painting on canvas or maybe a small collectible for the kitchen counter. But a life size statue? It scares me.

This same store SPECIALIZED in scary. We turned the corner and saw this . . . 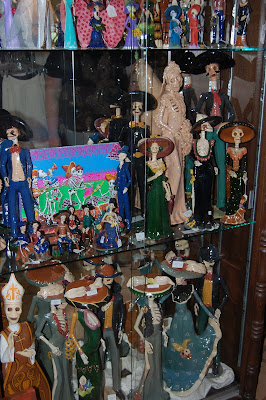 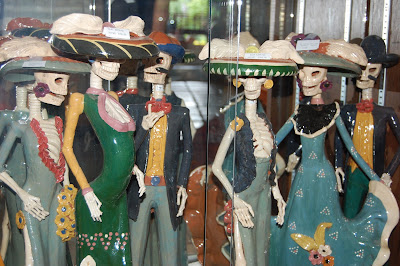 What the . . .?? It's like Thriller meets Gone With The Wind meets Zorro. So strange. And my L-5 hurts just looking at the lady in the green - I didn't know if I should buy her or give her a muscle relaxer. Are people buying these things?? Do they think "Oh, look! A sway-back skeleton dressed up like a 19th century Mexican! Wouldn't that look great on the table in my foyer?"

Or "I've always wanted a skeleton that looked like Phyllis Diller!" 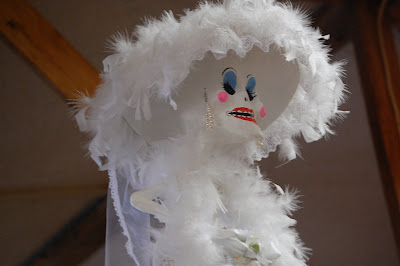 Or "Oh, look! A picture of what I'll look like when I finally get married!" 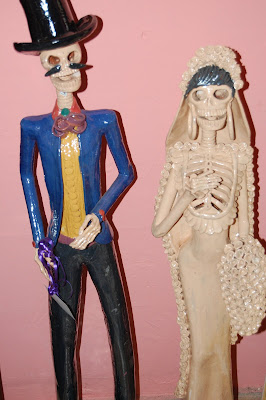 I know you're gonna be surprised to hear this, but we didn't find anything worth buying in the shops in Ingram. It was quite a disappointment. But that was ok because we had a big night ahead of us: we were going to the Crider Rodeo in Hunt, Texas and that promised to be a night of excitement.

Well, not so much. We arrived at the rodeo a little early so that we could get dinner at the grill that was on the property with the rodeo. We got the best burgers we'd had in a long time and were only slightly troubled by the fact that they were cooked by a sweaty woman in a sports bra. After we ate, we started to head over to the rodeo and were stopped by a man who must tell his barber "Give me the George Jones." He wanted to know if we were going to be coming back for the dance after the rodeo. We told him we weren't. He wanted to know why.

We told him that we had kiddos with us and that we had to get them down. He told us that there would be lots of kids there until 1 am and then waited for our response. He was persistent, that's for sure. Then we found out that he was the promoter for the "star" of the post-rodeo concert. I asked him who the star was and he told me his name was Jeff Griffith. I'd never heard of him. That was awkward. But, apparently, he has two number one hits on the country charts, a number one hit in Europe, and one that is going to be number one soon. Curious, I asked this man - this PROMOTER - what the names were of the songs that were number one on the country charts. His answer? "I don't actually know the names of the songs but they hit number one." Hmmmmmmm. Then, hearing where we were from, he told us about another guy he promoted who was from Willis. Again, I'd never heard of him. Again . . . awkward.

The rodeo was fun to watch. They played Leigh Anne Rhymes's version of The National Anthem while a young woman ran her horse around the arena with the flag. When she'd done her 20th lap and Leigh Anne was still on the first half of the song, I started to feel awkward. Finally, that was over and the rodeo began. The bull-riders weren't very successful - they were all thrown off within a couple of seconds. But I got some good shots . . . 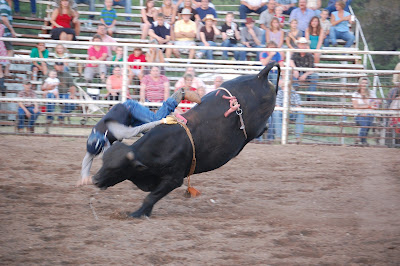 This one was taken just before I took off running AWAY from the fence I was shooting through: 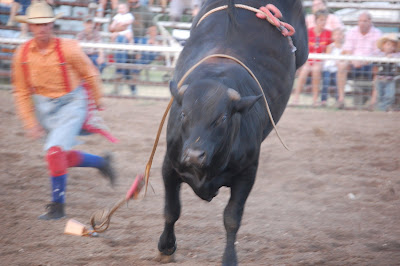 And I got some pictures of the cowboys . . . 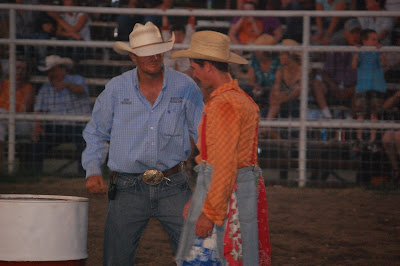 The calf-roping was no better - none of the competitors were able to rope one. But the barrel racing would be more successful, right? Nope. They all hit the barrels and one knocked a barrel down. I was tempted to go put MY name in for one of the events to see if I could win any money.

But, sadly, the whole Hill Country experience had to come to an end. And now I'm home.

With no life-size statues, skeletons, or cowboys to show for it . . .

I like this one,too! I'm still laughing about the Promoter guy! And I can't even talk about the skeletons yet......tooooooo hysterical!

I believe the Phyllis Diller one is a little more Cruella DeVille. And amazing at the lack of skill in the rodeo events. Usually small town rodeos are great. I love that you can actually see what's going on, instead of having to watch a monitor in Reliant Stadium, because you can't afford anything but cheap seats.

Speaking of awkward, have you looked at www.awkwardfamilyphotos.com ?
My favorite is entitled, "Saturday Night Special: He's Having a Baby." Don't ever tell anyone that I told you about this picture. It will make you laugh til you wet your pants.

Catchy, I didn't say anything at the time. But, did you notice at the Rodeo they cut the National Anthem off before it was finished? Kind of like a scratchy needle being torn off the record before it was time. Ummm... weird.

I am not ready to talk about the sway back skeleton...i had to take knee. HILARIOUS.

I'm shocked that you say that you couldn't find anything to buy at these stores! The mustachioed villain groom skeleton would have been totallly worth it!