We got to the auditorium at the local high school and sat in our seats, which were approximately five miles from the stage. Seriously? As I had not thought to bring binoculars, this was mildly upsetting. "No worries," I thought, "I'll just look through my zoom lens on my camera." Just then, an announcement was made: "No flash PHERtography or regular PHERtography." Well, crap.

Dance recitals are a funny thing. The dances with the little kids are SO fun to watch because they either stand there, stunned by the lights and the 200 faces staring at them OR they are watching their teacher off-stage and trying to mimic whatever move she's doing back there. Everyone enjoys those dances - I mean, how can you NOT?? They are just so cute. There was one class that had a little girl in it that stood completely still through both of their dances. She didn't cry or pitch a fit - she just quietly abstained. Sort of the Ghandi of her age group.

Then you have the slightly older classes - like maybe 7-10 years old. These dances can be both cute and disturbing. I mean, it's cute when you see them all doing their moves at the same time to cute songs. But when you see a 7 year old with gyrating hips, shaking her finger to lyrics like "she ain't got no money in the bank," it's a bit disturbing. Especially if you're sitting next to my mom who puts her hand on her chest and says things like "well, now, this is ridiculous."

Finally, you have the teenagers. I decided that it's just a little awkward to watch these older kids dance. They are just in that sort of clumsy, in-between stage and I kept finding myself a little embarrassed for them. Each time they'd jump up and all come thudding down at different times, I felt myself squirming and trying to avoid looking directly at them. The jazz, Chicago-esque number using the chairs? Awkward. The ballet number where they all came out wearing lavender and looking strangely jaundiced? Awkward. The hip hop number where they wore Uggs? Awkward. The hip hop number where they all wore track suits and kept their hair in their faces for that "hard" look? Awkward. In fact - ALL the hip hop numbers? Awkward. And the teenagers danced AT LEAST 3 hours of the whole program. I was THIS close to curling up in the fetal position for them.

But my niece was NOT awkward. She was PRECIOUS up there in her little red costume, shaking her "tail-feather" as the song instructed. She even got STUDENT OF THE YEAR for her age-group . . . isn't that amazing?!?! Gotta admit, I teared up a little at that one! And, here's my favorite illegal picture I took of her. She's at the far left . . . 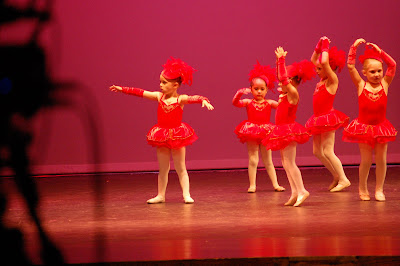 Isn't she just so precious?? Notice how she's concentrating, with her tongue in her cheek.

Sitting at her dance recital reminded me of my first - and only - dance recital. When I was in fourth grade, I took tap and jazz at Boni's Dance Studio. I wasn't very good so I was always in the back row - you know, so people wouldn't see me. Awesome for the self esteem. So my sister Tammy (who is 5 years older than me) decided to try to help me. She came to watch our class a few times, learned the routine, and then started helping me at home. Tammy worked tirelessly to get me ready for the big performance and I started getting better and better. Picture Flashdance only with a fourth grader wearing a sweat band around her permed mullet.

By the time of the recital, I was the best in the class and had been moved to the FRONT row, CENTER spot. This was a big deal. And the only picture we have of the whole thing shows me going in one direction and everyone else going the other way . . . 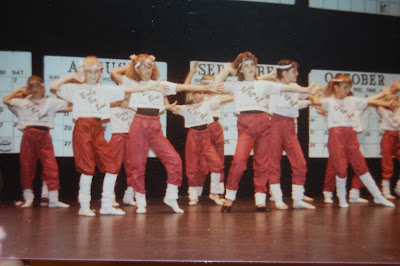 Ahhhh the irony. But the fact that I was not in sync with my fellow dancers does not haunt me quite as much as the parachute pants, leg warmers, and the "Body by Boni" crop top.

Like I said . . . dance recitals are a funny thing. Don't you agree?

Labels: my family, my life

OOOOOHHHH, Catchy!!!! You did this last night after you left my house at 11:00!!! And funny thing I'm checking this morning like I was expecting you to have it on here!!! How did you find the picture? and how late were up? Memories!!!

Ok, not to sound strange but the picture of Emma was very artistic. I am not sure why....maybe the bright colors. You should frame it and put it in your bedroom. I LOVE that it is illegal! I have an an illegal picture of the inside of the Sistine chapel. ummmmm. Didn't turn out quite as good. This is Di by the way.

Catherine, you and mom are never invited to another one of my precious baby's recitals...EVER!! Some of those hip hop routines were FUN, brat. I tried really hard not to laugh at this blog, but I couldn't help it in the end. Looks like another way that Avery might be your child, she seems to be doing something different the others too!

How do I keep signing in as mom? wtf? That was me, Erin..you know the mother of the sweet baby with the red costume on.

I may be the proud mother, but I think I remember all the other girls in your class were going the wrong way. You, alone, were going the right way. That's my girl!! Avery's outfit was so cute and she was so calm. No self-esteem issue here. She KNEW she was special. Cute stuff Catchy.