Well, today is my birthday - that glorious day when I get to be the center of attention. The day when people can break into song on my behalf and it's not awkward. And the day when I can eat as much cake and ice cream as I want without being judged.

I freakin' LOVE my birthday.

BUT . . . I have to confess something to you today: this year I feel like I might be on the verge of a mid-life crisis because I'm 35 years old and had hoped to accomplish so much more by this point in my life. I mean, there are MAJOR goals that I haven't reached . . . and important dreams that haven't been realized. And it's kind of depressing.

"Aren't you being a little hard on yourself, Catherine?" you ask. I don't think so. I've wasted my time when I could have been well on the way to checking some of these things off of my life's "to-do" list. But I'll let y'all judge for yourselves. Just take a look at all the things that I have yet to accomplish . . .

1. Be the recipient of a comment such as: "You look a little thin - are you sure you're eating enough?"
Sure, this may seem a little shallow but it's a dream of mine so don't knock it. And I'm not picky - I'll even take something similar, like "Man, you barely ate ANYthing tonight" or "Is that your hip bone in your pocket or are you just happy to see me?" You know - something along those lines.

2. Being asked to tour with the Hip Hop Abs group as a back-up dancer.
Look, I've been doing Hip Hop Abs for a while now and I think it's time I got recognized for all my hard work. No, I don't have any rhythm. No, I don't have any soul. But you've not seen the "Flava Jam" or the "Oblique Slammer" until you've seen me do them. Aaaaaaand, frankly, you won't see me do them because I keep the blinds closed and the lights off so that I don't embarrass myself. So maybe this goal is a bit premature . . .

3. Getting Mike Rowe to marry me using any means necessary . . . including, but not limited to, a pregnancy scare.
Don't judge me. I love that man.

4. Getting in the Guinness Book of World Records for "Thickest layer of Cheetos cheese on fingers." I've tried, people. I really have. But the problem is that the cheese is just so darn GOOD. I try to resist it but I just can't do it - I have to lick it off, essentially licking my chances at a world record away. But it is SO worth it . . .

5. Getting a wedding ring that's so big I have to take it off every three hours to give my hand muscles a break.
Again, you make think this is shallow. I think it is a worthy ambition. But, frankly, at this point I'd take a ring pop . . .

6. Use the phrase "Fo shizzle, yo" in a conversation without anybody thinking it's funny.
Stop laughing. Yep - I think I need to start coming to grips with the fact that I may never accomplish this one.

7. Have the Permullet admitted to the Hair Hall of Fame.
Seriously - why hasn't this been done yet? It's a travesty. And the worst part is that I'm SURE it would be a total SHOE-IN. I mean, just LOOK at it: 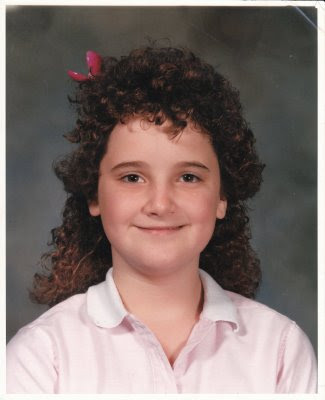 It's amazing. And it needs to be recognized on a national level, friends.

8. Be mistaken for a butt model.
I sometimes fantasize about having this conversation with someone:

And, friends, I'm not too proud to admit that I'm not really sure what my response would be in that situation . . .

9. Get a Little Debbie snack cake named after me.
This would be the greatest dream EVER. And I even have a name picked out for mine: Catchy Cakes. Seriously - how perfect is that?? I think they'd be some sort of cross between Oatmeal Creme Pies and Swiss Cake Rolls. Well, actually, that might be totally disgusting . . . but the NAME is super presh and that's all that matters. And the best part is that I'm SURE that if Deb named a cake after me we would TOTALLY be BFFs and she'd give me a lifetime supply of Swiss Cake Rolls. And then my life would be complete.

10. All kidding aside, I do have one goal that I really DO want to accomplish: Rid the world of abuse . . . of the word "literally."
Seriously. I can't take it anymore. My friend just emailed me tonight to tell me that this lady told him that she'd been in a wreck and it LITERALLY killed her. This is the kind of abuse that I want to eradicate. I want to run for office with that as my platform, asking for harsh prison sentences for people who say things like "I was so mad I was LITERALLY spitting fire." Do I have your vote?


So now you see why I'm a little down this year and why I feel like I've let myself down. These are HUGE goals to leave unrealized . . . I can't believe that I have failed so miserably. It's so depressing. I'd really like to have a mid-life crisis over it all but I can't afford a Corvette and I have no pool boy to have an affair with. BUT there's always Gustavo . . .

Hmmmm - I think I'm gonna like my mid-life crisis!!

I literally hope you have a happy birthday. And I would totally vote for you–literally.

I hope you had a great b-day!! And as for No. 8, I read in "Gustavo" for "Stranger" because I know that's what you really meant.

So you want to replace me as your BFF? Is this your way of getting me to supply you with endless Cake Rolls? Fine, as soon as you're finished being all healthy and stuff I'll start bribing you to keep me instead of little Deb. Poor Jilly. So easily tossed aside.