I've told y'all before about the tracker that I have on my website - it's a cool service that tracks the number of hits I get each day, the search terms that land people on my page, and where in the world my readers come from. That last stat is really interesting to me because it's cool to know where my blog is being read. And they plot it for you on a map so that you can look at the map of the world and see little red bubbles where you have readers. Wanna see it? Okay! Here's what it looked like today: 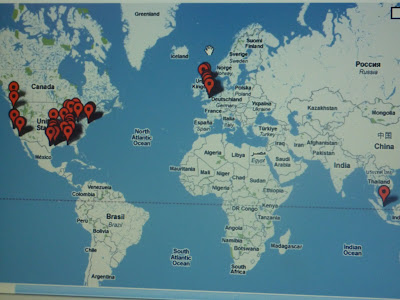 So I like to look at this little map from time to time to see how I'm doing. But I'm always struck by the fact that, aside from a few readers in California and Washington, I haven't really been able to reach the Western part of the United States. And this bothers me. I mean, is it something I said? Am I boring? Am I fat? Am I ugly? Am I going to die alone as a fat, ugly boring person??

Wow - that really snowballed, didn't it?

ANYWAY . . . I've decided that I'm going to try to reach out to folks in those states, one state at a time. Maybe I need to write about something that interests them. Maybe I need to try to connect to them more. I don't know what I'm doing here but I'm willing to give it a shot. And who knows? Maybe I'll expand into those hold-out states, one red bubble at a time. It'll be my very own Manifest Destiny project - my 3rd grade social studies teacher will be so proud that I remembered that term. And if any of my readers knows anyone in those states, you can help with Operation: Manifest Destiny by . . . well . . . begging them to read my blog. Bribing them if you have to. I'm not above violence, either . . .

With that said, let's begin our efforts to conquer the West:

We'll start Operation: Manifest Destiny with Nevada. In preparation, I did a little research and found some facts about Nevada . . . like their state bird is a Mountain Bluebird and their state flower is Sagebrush. And I found a website that said I could find permanent residents in Nevada and then gave me a link that said "find a grave." And I had to give kuddos to them for that because you can't really get more permanent than THAT. But the more and more I researched about Nevada, the more I thought about Las Vegas. And the more I thought about Las Vegas, the more I thought about gambling. And that's when I decided that I just need to come clean and be totally honest with any potential Nevada readers. So here's my confession:

Now some people might say that flippantly but please mark my words on this - when I say "terrible," I mean AWFUL, AWFUL, AWFUL. I lose just about every bet I make. I bet my friend once that A&M would win a football game and ended up making a pumpkin cake for him each week for a month. I bet another friend that I could beat him in ping pong and lost that one miserably. And if I'm trying to think of someone's name and say "I'd bet $100 that it begins with a G," it invariably begins with an M.

It's a real problem.

When I was in law school in Birmingham, my parents didn't like me to drive home to Texas by myself so they would pay for someone to fly out to Birmingham and then drive home with me. I loved that they had unreasonable fears that I was going to be abducted off of the interstate somewhere between Houston and Birmingham, because I enjoyed the company on the road trip. One year, they flew my sister Tammy out to ride back with me for Spring Break. Tammy was actually back in school at that time and was on her Spring Break, as well. So my parents sent Tammy with some extra cash so that we could do something fun on the way home to kick off our Spring Break. They thought we might have fun spending the night along the way in some nice Bed & Breakfast or something like that. But we had other plans . . .

When you drive to Houston from Birmingham, you take I-10 right through Lake Charles, Louisiana. And do you know what's in Lake Charles, Louisiana? Lots of casinos - that's what. So Tammy and I decided that we were going to hit the casino on the way home and get to know the high-rolling gamblers deep within ourselves. We were so excited about our plan and talked about it all the way to Lake Charles - we were convinced that we were going to take the extra cash that our parents gave us and parlay it into some MEGA BUCKS. It was going to be epic. The people of Lake Charles would remember us forever.

When we got into Lake Charles, we picked the casino that we wanted to go to. As we pulled into the parking lot, we called our parents and left a voicemail saying something to the effect of "Hey, we're here at the casino. Don't wait up for us - we could be here all night. We're just going to ride out our winnings so we might just stay the night and come home tomorrow. We'll call you later to give you a report on how much money we've won Don't be jeaaaaaaaaaaaalous!!" We were absolutely giggling maniacs, beside ourselves with excitement. We took a second to gather our composure and put on our game faces and then we walked into the casino, ready to put the hurt on Lake Charles.

When we walked into the casino, there was a big escalator that took you to a second story where the entrances to the actual casino boats were. We rode up the escalator and, at the top, surveyed our options. There were two boats and one was called something like "The Grand Casino." We didn't really know which one to pick so, being the seasoned gamblers that we were, we decided to pick the one with the best name. And, in this case, it was the "Grand Casino."

We walked into The Grand Casino and looked around - the place was hopping and a bit overwhelming. We quietly conferred and decided that it was best to act like we knew what we were doing so that no one would know we were newbies to this whole scene. We did a few laps around the place, our heads held high in a slightly snobby manner, trying to figure out how to get in the action. After our fifth lap around, we finally had to stop and say, "Ummmmm . . . excuse me . . . ummmmm . . . where do we get the little chip things?"

Our cover was totally blown.

Once we had converted our money to chips, we looked around to see what we could play. We played on the dollar slot machines for a while but, after a while, we grew tired of those. That's when I saw the Blackjack table. I turned to Tammy and said "Blackjack - now I'm gooooooooooooooooood at Blackjack. I'll totally win us a bunch of money at that table." So we headed that way and took a seat at the table. The buy-in was $20 so I put my chips on the table and gave Tammy a knowing look that said "Hey, don't worry - I've got this, toots." The dealer dealt my card. I said "Hit me." He corrected me and told me I had to tap the table. I said "I know - I was just testing you" and tapped the table. He dealt another card. I tapped the table. He dealt another card.

Aaaaaaaaaaand that's when I lost the $20.

Aaaaaaaaaaaaand that's when I lost the $40.

Aaaaaaaaaaaaaand that's when I lost the rest of our money.

Before I even knew what was happening, I had turned to Tammy with a crazed look in my eye, had grabbed her by her shoulders, and was shaking her and yelling "Do you have anymore money?? I can win it back! I CAN WIN IT BACK!!!" I'd been in the casino a grand total of 20 minutes and I had already lost all my money and developed a serious gambling addiction. And poor Tammy didn't get to spend any of the money that our parents had given her.

So we got out of there as fast as we could. We went down the escalator and headed back to the car and called our parents to tell them we'd see them in a few hours. That's when my dad told us that we must have picked the high-roller boat because there should have been a nickel slot machine around and a $5 Blackjack table.

So our big gambling adventure lasted almost exactly 30 minutes. When we got back out to the parking lot, my car had not even cooled down yet.

So I must be up-front with any potential readers from Nevada - I'm not a good gambler. And it's possible that, if you accompany me to a casino and I run out of money, I might grab you and shake you and ask you for more. But that's okay. You have to love me through it, friends. Love me through it.

So, dear people of Nevada: will you give me a chance? Will you read my blog? I might not be a great gambler or know what Sagebrush looks like but I'm sure I'll say SOMETHING in my blog that you can relate to.

This is EXACTLY why I don't gamble. I've never done more than put $1-worth of quarters in a slot machine when I was in Vegas, but I know I'd have exactly the same experience as you. But I have a hard time spending money on intangible things. I like to have something to hold for my money. Like clothes. Or jewelry. That's why I don't spend money to "do" things, like golf, or riding rides. The only thing that does qualify, is travel. But there has to be some sort of souvenier and pictures as evidence.

talk about a debbie downer. :(