Confessions of an 11 year old girl.

Most of you know by now that I was a HUGE New Kids on the Block fan back in the day - oh, who am I kidding? I'm STILL a huge fan. In fact, the New Kids are still in my top 5 favorite things to talk about . . . along with Gustavo and all things Little Debbie. ANYWAY, what many of you don't know is that, before I gave my heart to Joe McIntyre of NKOTB, my heart belonged to one man and one man only . . .

Ahhhhhhhh . . . Kirk. The first love of my life. He was the picture of perfection and he was hanging ALL OVER my bedroom walls. With his curly hair and his pleated pants - how could a girl resist him? Mike Seaver was the cutest airheady guy on TV and I loved him. I was glued - if I didn't feel so strongly about flagrant misuse of the word, I'd say "literally" glued - to the television once a week when Growing Pains came on. And when I wasn't watching his show, I was sitting in class doodling "I love Kirk Cameron" all over my book covers and writing notes to my friends, signing off as "Catherine Cameron." I was so in love with him.

Which makes it all the more strange that I ditched him so quickly when Joe McIntyre came on the scene. What a little TeenBeat tramp I was.

This weekend I cleaned out my garage. I had several boxes of "keepsakes" that had been up in the attic at my parents' house for years so I decided to go through them and throw out anything that wasn't really worthy of "keepsake" status. You know, like the Snickers wrapper I kept from a random Astros game. Seemed like a big deal to me then . . . not so much now. Anyway, as I was going through one of the boxes, I ran across a letter that I had written to Kirk Cameron that I never mailed. I pulled it out of the envelope and began reading it. I immediately became so embarrassed for myself that I didn't even want my dog to see it. So I thought I'd do what any normal person would do with something that embarrasses her so much that she curls up in the fetal position by herself in her garage . . . post it for all of y'all to see.

So here it is, complete with the inner thoughts going through my head as I read this in my garage on Sunday afternoon:

I hope you don't mind me calling you by your first name, I don't really know what else to call you so I'm really sorry if you don't like it. [Oh good God . . . I can't take this] Anyway I've always tried to write you but I never mailed them. [Thank you, Lord, that I was never good at following through . . .] I'm only 11 yrs old but I'm trying to get into acting. [Oh crap.] I've always dreamed of acting but I've never done anything about it. I guess I was thinking that a director would come up to me and ask me to be in a movie. [Why am itching? Are those hives on my arms?] I read about your new movie. I'm gonna ask my mom if I can see it when it comes out. [Way to show him you're an independent young woman . . .] I wish every day that in the first movie I'm in you're in it too. [I'm hyperventilating. I'm ACTUALLY hyperventilating.] I wish you would come to Houston for something so that I could meet you once but I would probably faint. [Oh, geez. What I'd give to pass out right now . . .] I've got a few questions for you: Do you enjoy watching yourself on television? What's your favorite song? Who are your favorite actors and actresses? Do you like it now that your so popular? [Seriously, 11-year-old-me? "Your" instead of "you're"? Unacceptable!] And do you enjoy posing for your posters and pictures?

Well if you don't want to give me my answers, that's ok. If you do send me back a letter could I please have an autographed picture of you if its not too much trouble. Hope to see you on the screens if I get that far [Oh, I need to burn this NOW.] and hope to see you a lot in the future.

Your #1 fan and friend,
Catherine.

[And my favorite part, which must be read in the style of a gushing girl who is blurting out a profession of love . . .]

P.S. I have a major crush on you and I've only got posters of YOU up in my room!

[Good thing I clarified that for him because I'm sure he would NEVER have picked up on my true feelings otherwise . . .]

One thing that was so funny to me when I read that letter was how much I talked about wanting to be an actress. I mean, I guess most kids want to be famous at some point in their lives but I don't really remember wanting to be an actress so much that it warranted a letter to Kirk Cameron. It's funny how a dream that was apparently so important to me back then is hardly memorable to me now.

I have no current dreams of being an actress. But it's not because I've realized that it's not all it's cracked up to be or because it's an unrealistic goal. No - it's because of the whole "pausing live TV" phenomenon. The last thing I want is for someone to pause their TV to take a phone call like I do and leave me looking like THIS for 45 minutes while they gab with their friends: 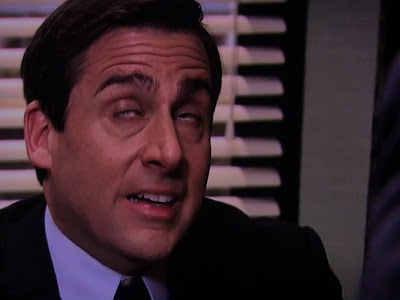 But thanks, Kirk, for the fun memories and the stress-induced rash I got on Sunday afternoon. And for reminding me of my childhood. I kind of wish that I HAD mailed the letter so that I could have gotten that autographed picture from you. I guess I could write you a new letter but I don't know what I'd say to you now, Kirk.

OMG! I don't even know where to begin.....that was fabulously hysterical!

Sorry, that was actually moi....Tammy

You are so brave.