I was preparing for trial this weekend and, at one point, decided to take a quick break to run up to Chick-Fil-A and grab some lunch. As I pulled out of my neighborhood, I saw a man on the bike path who was wearing knee pads and wrist guards . . . and WALKING. Not rollerblading. Not skateboarding. Not even walking FAST. Just out for a little stroll . . . with protective gear.

So I went up to Chick-Fil-A and got my lunch. I sat in the lunch hour rush in the drive-thru line and kicked myself for not having taken his picture. I finally made it through the line and headed back home with my lunch. As I got close to my street, I noticed that the overly-cautious walker had not made it very far down the bike path in the time that I had been gone. In fact, he had just barely passed my street - it was like a little gift from God. So I got my camera, zoomed it way in, slowed down to a stop in the middle of the street, and took a picture. I felt a little stalker-ish doing it but it had to be done: 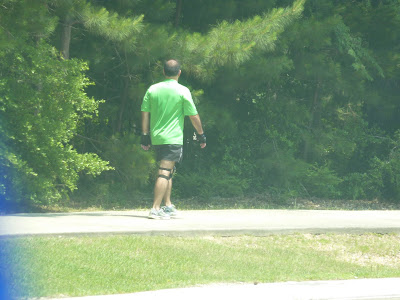 Seriously - look at him. He's not even looking forward. He's just strolling along, staring off into the woods daydreaming having a relaxing walk. And that makes the knee pads and wrist guards even more perplexing. Honestly, if he doesn't have sleep apnea or epilepsy then he really has no excuse.

When I had first seen this guy, I had called my best friend to tell her about it and then I emailed her this picture so that she could fully visualize him with me. We just laughed and laughed at his expense. It was awesome.

I was walking my dog later that day on the bike path and I passed one of my neighbors. I smiled and said hello to him as we passed and I noticed that he seemed to just glance away from me. I thought that was strange but, as I have pretty unfriendly neighbors, I got over it. A few seconds after I passed him, I felt a little breeze on my stomach. Aaaaaaaaaaaaaand that's when I realized that my shirt had ridden up and was exposing the entire left side of my belly. And, believe me, it's gonna take a LOT more Hip Hop Abs for that to be okay.

So I can never look my neighbor in the eye again.

And I hope he doesn't blog.

Labels: my life, people I meet

This wouldn't happen to be the same neighbor that you later saw naked would it? Because that really would've been karma!