I live in the suburbs and have all my life. Some people think that suburbanites don't know what real crime is. That we're sheltered and spoiled. That we've never seen "hardened criminals" at work. Well, I say they're wrong - we suburbanites have our fair share of criminals to deal with, believe you me. In fact, just the other day, I ran across a stop sign that had been hit by what I can only imagine is a gang of thugs roving around my little suburban hometown: 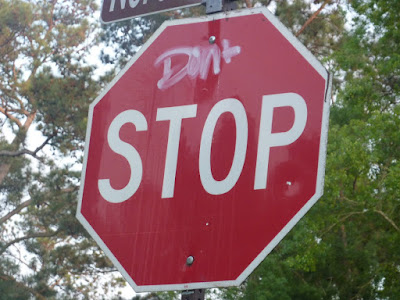 This is just embarrassing.

But I must say that, other than the poor punctuation, this is a graffiti artist I can relate to on many levels:

1. He's obviously not comfortable with breaking the rules and neither am I. When I go to have lunch with my niece at her elementary school, I'm the only 34 year old who puts my head on the table at the end of the lunch period when the teachers tell the kids, too. When the kids keep talking after the teacher has said to quiet down, I get sweaty pits and my butt starts to clench a bit because I'm afraid a teacher will give me a look. I bet this graffiti artist is the same way. He probably thought this idea was EPIC and has no idea that the real hardened criminals out there are laughing at him. I can only imagine myself in his position working myself up for such a strike: "Oooh! Oooooooooh!!!! I know what I'll do! I'll go and write 'Don't' on a stop sign. [nervous laughter] Yes! That will be AWESOME." He probably giggled the whole way home.

2. He probably thought the play on words was super clever. I mean, he didn't go with a big "Ef You!" or some other vulgarity - he went with a little word play. You know what? I'm just gonna say it - this is a criminal who thinks outside the box.

3. He was obviously nervous about this big rebellion because, based on the streaks running down the sign, I'm going to guess that he was sweating profusely at that time. Plus, he was in such a hurry, he BARELY finished the "T" before he high-tailed it out of there. I guess he just wanted to get it done as quickly as possible before the po po came. [see how I used hardened criminal language like 'po po'?].

4. He used shoe polish instead of paint because he didn't want to do anything crazy like RUIN the sign. I bet he wore sunglasses to BUY the shoe polish. And paid for it with cash.

5. He's probably living with regret, hoping daily that there haven't been any wrecks because someone ACTUALLY thought it was a new state-issued "Don't Stop" sign.

This is the kind of person on our streets, friends. So as you're tucked into your little suburban beds tonight, thinking about how safe you are, think again. Remember that there's some guy wandering around out there with shoe polish and poor punctuation skills who can strike at any -

Catherine, you continue to amaze me! I just laughed and laughed! It's the only way to start the day!!!!!