This past Saturday I took a concealed handgun class with some of my friends from work. Most of the day was spent inside a classroom learning the laws in Texas related to carrying concealed weapons. But the fun part was at the end of the class, when we got to drive over to a shooting range to take the shooting part of the exam for our concealed handgun license.

To take the exam, we had to shoot 50 rounds at a target that looks like the silhouette of a man - a green man, to be specific. Here's what it looks like:

A perfect score on the shooting test is a 250 and our instructor explained that, to get that score, we had to shoot within the 8, 9, or X circles. I was in the last group to shoot and was a little nervous that I might shoot so far off my target that I would actually hit someone else's target and that they would take the gun away from me for the safety of others. I tried to breathe evenly as I donned my ridiculously large ear muffs and stepped up to the shooting line. Our instructor called out for us to take the first shot, I raised my gun, gulped audibly, and pulled the trigger. I looked at my target and was pleasantly surprised to see that my first bullet had hit in the 9 circle. I wanted to jump up and down and giggle uncontrollably but I didn't think that would be very safe to do with a loaded weapon. Plus, I also wanted to look cool. Well, as cool as I possibly could with shaky hands and ear muffs that were twice the size of my head.

ANYWAY, round after round I managed to keep my bullets within the center circles and continued to stifle my desire for rapturous giggling. At the end of my 50 rounds, my total was 247 - just three points off of perfect. That's when I realized that shooting green men might be one of my spiritual gifts.

I know I'm 34 years old and should be past wanting to take my work home to show my mom but I couldn't help it - I wanted to show my family what a stinkin' Bad A I am . . . yes, that's right - a giggling, gun-toting Bad A. So I took my target over to my mom's and showed it to them and they ooooooed and ahhhhhed appropriately.

Aaaaaaaaand then I didn't know what to do with it.

Should I throw it out? Just toss it in the trash with my banana peels and Little Deb - I mean, other super healthy trash? That didn't seem right.

Should I roll it up and stick it under my bed with my New Kids post - I mean, other normal non-boy-band items that a 34 year old would have under her bed? That seemed a bit silly - I didn't really care about it THAT much.

So I tried to think of some good use for it and my first thought was that it might be a good crime deterrent - I mean what criminal wouldn't pick up the subtle message? I think it could be pretty darn effective. For instance, I could use it as a window treatment for my front door: 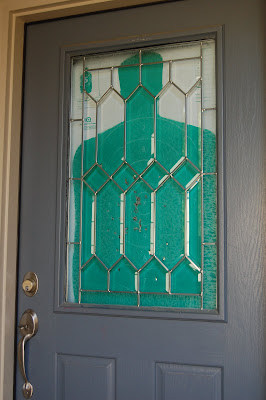 Or as a welcome mat: 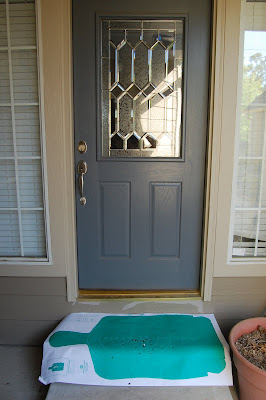 Or perhaps as a sun visor for my car: 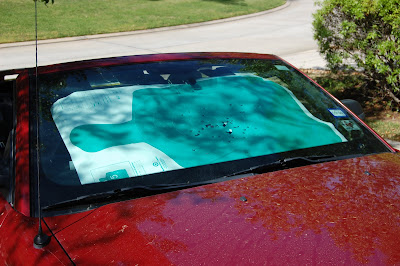 But taking him around to pose for all these pictures made me feel a bit of an attachment to him, frankly, and I decided that I couldn't just hang him on my front door or stick him in my windshield. And I REALLY couldn't just throw him away.

So I decided to keep him in my room: 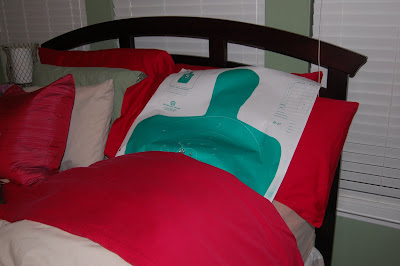 And I think he fits in nicely on the . . . ummmmm . . . unoccupied side of the bed, don't you? I'll admit that a bullet-riddled green man is not the exact KIND of man I had envisioned sharing my bed with. But let's face it, people . . . I'm not really in a position to be picky.

Plus, my New Kids posters are too far under the bed.

You are crazy hilarious!! Crazy Hilarious! Only your mind could produce this. My vote is for the window of the front door. OMG. This will be one of my favs.

Catch, that was great!! I cracked up the most at the sight of Green Man tucked into your bed!! That was perfect!!

This has to be one of your best ones yet! I think it works best in the front door window. Better than Brinks, I'd say. One of the paradoxes of shooting, is that women tend to aim better than men. I think it's because we're less confident, and more teachable. Most American males are raised with the mentality that they should be good at shooting, just because they're men, so they don't listen.

But, from personal experience, I will tell you that all that pride in hitting the target will dissolve when you try to shoot a moving target!

omb...this is bra-zilliant! The window treatment is definitely my favorite, but I almost woke the kids up from laughing at the man in your bed too. HILARIOUS!!!

Boy, I guess we all better hope that all these American males who don't listen also don't read!

Don't worry about looking "cool". Anyone who says "rounds" instead of "bullets" is super-cool in my book!

So as a former employee in the hunting and shooting industry, I'll ignore the fact that you called your ear protection "ear muffs" and just say that this HAS to be one of my all time favorite posts! I laughed out loud at the green man tucked into your bed. Oh my gosh, I'm laughing just typing that. I'm proud of you and despite what men might say, it's a fact that women tend to be better natural shots than men. Go Catchy!!!

Starting over. I LOVE the idea of hanging him in the door as a window treatment. I think that would be both effective and entertaining, serving a dual purpose. If not, you could always hang him in the mirror next to where you get ready so each day when you wake up, you can be reminded of what a bad A you are. :P Just sayin'.

Either way, I say he needs a name, quickly. He will become a permanent part of our conversations that will eventually go something like this: "Hey Catchy! How's (insert green boyfriend's name)?" Just sayin. Love the post! This is definitely one for the books- and I must admit that it made me laugh SO HARD that I now have to clean off my computer screen after spewing water. Awesome. :)

Agreed; I think that putting GM in your front door window is a better criminal deterrent than an NRA sticker! It shows that you aren't just a dues paying member of something; you can deliver if need be! I'm so proud of you! I'm thinking that I need to start taking shooting lessons so I can get a GM of my own!

OH, and I love that you think that shooting green men might be one of your spiritual gifts. Scully and Mulder would be so proud. . . .