My week in pictures

As I've mentioned about a million times, I was in Corpus last week for a conference. I had kind of a weird internet situation (do NOT get me started on THAT) so I didn't get to blog each night to tell you about my trip. So I thought that I'd hit the highlights with you through some pictures . . .

We left Houston on Tuesday morning and headed down south with a bag of peanut M&Ms and two Oatmeal Creme Pies (thank you, Christina and Cara!). On our way down there, we stopped at the Buccee's in El Campo . . . to get Beaver Nuggets, of course! On our way in, we saw bags of recleaned deer corn: 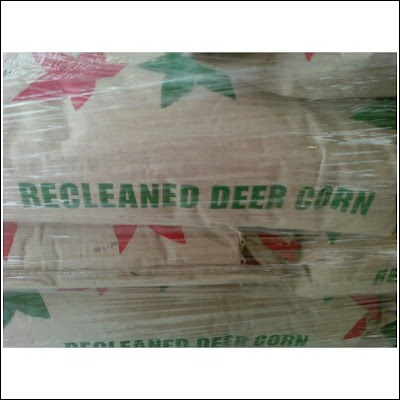 Why is it re-cleaned? Why wasn't the first cleaning enough? Interestingly, the fact that they call it "re-cleaned" makes me doubt its cleanliness. It makes me wonder why the first cleaning wasn't enough and makes me worried that the second cleaning maybe didn't do the job, either. To make matters worse, it smelled like a dead animal. I rest my case.

At that same Buccee's, my lifelong search for my dreamy hunk o' love finally ended. I finally found one. A big one . . . 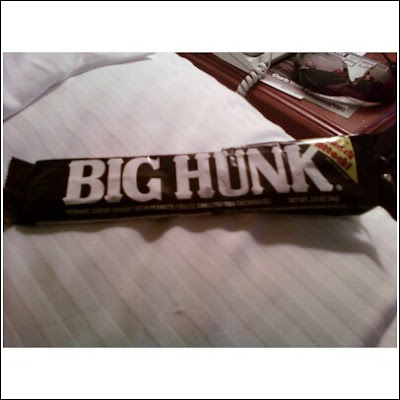 We got to Corpus and checked into our hotel. I went up to my room, which smelled like someone had been chain smoking in there with about 27 wet cats. Yes, 27. It was horrible. Luckily, they were able to move me to a different room that smelled MUCH better. The only problem was that it was a handicapped room so the shower nozzle hit me at shoulder level, the sink was so low I had to practically do the splits to see myself in the mirror, and the toilet was high. It was an experience getting ready in there each morning. And I had to re-adjust to my toilet height when I got back home. That was interesting.

The first night we were there, we ate at a restaurant called Catfish Charlie's. We had read about it in a little magazine that was in our hotel rooms and the write-up said "Catfish Charlie's motto is 'Come on and have some good food and meet some great people in a comfortable family atmosphere!'" That's the longest motto I've ever seen. In fact, it's not a motto at all - it's an invitation and I thought we should refuse to go on principle alone . . . I mean, if a restaurant doesn't know what a good motto is, can I trust them to fry up a hush puppy properly? But, after some discussion, we decided to eat there anyway because they deep fry everything and didn't spell Catfish with a K. I hate that.

The next day, we went to the Texas State Aquarium which was an interesting experience. I got to touch the back of a sting ray and thought that was really cool. Then the guide got on the microphone and said that we should make sure to wash our hands afterward and that she was going to tell us something about the sting ray that would make us understand why. I was at the antibacterial station before she finished that sentence. I don't think that sting ray cleanliness is a proper subject for a cliffhanger . . .

I saw a couple of signs at the aquarium that I thought were interesting. 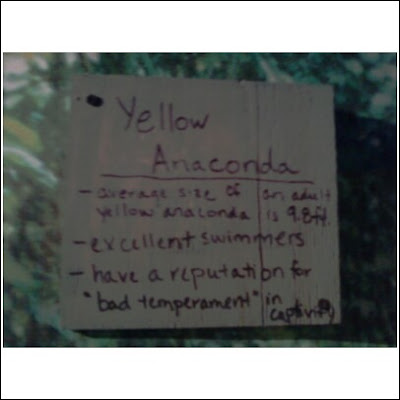 They were going for this authentic jungle look so they had these wooden handwritten signs everywhere. I don't object to that. But I mean, really . . . can we work on the handwriting? And the slope of the lines? And can we try to plan out our sentences so that we don't have to squeeze words in at the bottom?

But my favorite was this one: 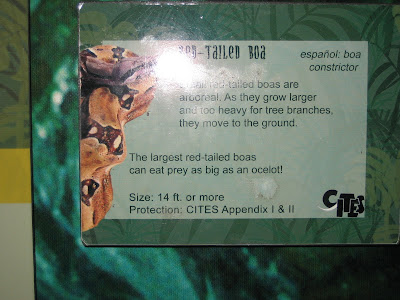 What is an ocelot? This comparison is useless to me! I see from the use of the exclamation point that this is an impressive fact but what does it mean? Was there not a more commonly known animal that is roughly the same size as an ocelot? Maybe a deer? A cow? An elephant? Is the ocelot so uniquely sized that this is the only animal available to properly describe the boas abilities? I think that this aquarium sign writer was showing off . . .

As if that wasn't bad enough, we went to dinner the next night at a Mexican restaurant that made everyone sick. I noticed something interesting on the menu: 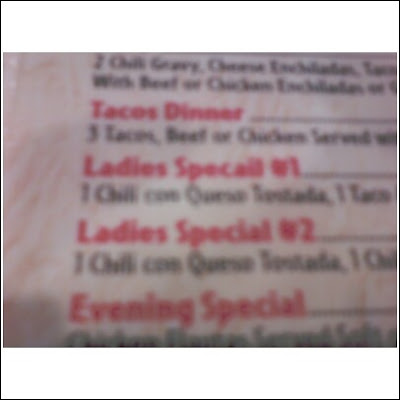 So what did I learn from being in Corpus for a few days? I learned that Corpus needs me, friends. Catfish Charlie's needs help with mottos (how about "Catfish you have to "C" to believe"?), the aquarium needs someone to approve its signs, and Kiko's Mexican restaurant needs an editor.

Perhaps I should go and offer my services.

Labels: my travels, spelling and grammar

"Re-cleaned" deer corn is simply regular corn that deer eat and can be "re-used." I own a deer farm and we shovel the deer waste into a nutrition salvage machine. That machine seperates the the corn (which often goes undigested) and other nutrients from the deer feces, washes, and repackages for consumption. I hope this helps.

Too funny! I don't think Corpus is the only place that could use your help! :)

Anonymous - that helps but it made me throw up a little bit in my mouth . . .

You must not be a cat lover, Catherine. An ocelot is a wild cat, probably comparable in size to a bobcat, or small mountain lion. Does this help?

OMGosh! What memories of my 18 months in Corpus! I feel for you, that's for certain. Could have warned you about Kiko's. If you're unfortunate enough to have to trek back down to the seventh layer of hell, try Rosita's instead -- it's a whole in the wall but the best mexican food in the city ... which you know is saying a lot!

I was recently at the aquarium in Corpus. I don't remember the handmade signs. I do remember staring at one of the largest of the large snakes there for about 15 minutes. I halfway want one just too watch it move, but you probably have to feed them ocelot sized meals and that is cost prohibitive.

I feel terrible for the deer that are fed the "re-cleaned" corn. Hopefully those are the ones about to be killed. I would want to be.