On my last day in San Diego, I went to a Farmer's Market with my friend Kacey and her daughter, Maya. I've never been to a Farmer's Market because I usually don't want to get up that early to go buy fruit. I'm just being honest. But I really enjoyed my experience out there Sunday morning. I saw the most beautiful flowers, the most scrumptious-looking fruit, and the most interesting-looking lady: 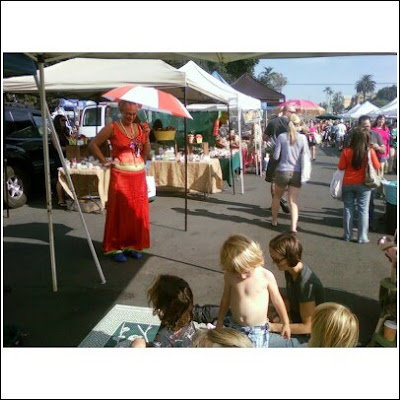 A satin belly shirt, a satin skirt, an umbrella, and Crocs? It takes a confident woman to pull that off. But she was rockin' this look and rockin' to the band we were watching.

The negatives? First, several booths sold organic cheesecake and, as with the organic cupcakes I talked about yesterday, I have to object to that on principle. Second, aside from a few gay men, I think I was the only person wearing mascara there so I'm pretty sure I looked out of place. Third, I met the pushiest hummus salesman EVER.

"A hummus salesman?" you ask. Yes, I say. "A PUSHY hummus salesman?" you ask. Yes. Now I admit that I'm kind of a sucker and that salesmen in general can see me coming from a mile away. But I never thought I'd be preyed upon by a man pedaling flavored hummus. But, before I knew it, there I was in the middle of the Farmer's Market slowly going into debt one container of hummus at a time.

So how did it happen? Well, I'll tell you. I was walking through the market, looking into all the booths to see what they offered. I saw this handsome man approaching me and wondered if he was going to tell me that he's a fighter pilot and that he wants to marry me. Instead, he asked me if I wanted to taste his pumpkin hummus. I briefly wondered if this was a metaphor that should offend me but then I saw that he was in front of a hummus stand and it made sense. Then we had this conversation:

Hummus guy: You want to try my pumpkin hummus?
Me: Ummmm . . . sure!
HG: [walking me over to the table with all the hummus samples out] This is a pumpkin hummus [offering me a sample] - great for the holidays, no?
Me: Yeah, that is good.
HG: You like it?
Me: Mmmmm hmmmmm. It's good.
HG: [to the guy behind him, working behind their table] She'll have one of the Pumpkin hummus. Now do you like spicy things?
Me: [not quite sure what just happened] Ummm - yes . . .?
HG: I'm going to show you one of our most popular flavors. I give you good deal. Here - Spicy Pepper. Try it. You like it. The heat hit you at the end.
Me: Yeah, that is pretty good.
HG: See - I told you. You like it. [to the guy behind him . . .] She'll take a Spicy Pepper.
Me: Well, I -
HG: It's okay, it's okay. I give you good deal. Now you try the Spicy Chipotle. It's spicy and smoky.
The guy behind the table: You like it. It's popular flavor. I get it for you.
Me: [WHAT'S HAPPENING TO ME??] Well, actually, I'm about to get on a plane to head back to Texas.
HG: Ah! Texas! I tell you something - someone just bought these to take them to Italy. It's okay - you put them in your suitcase. No problem. You do it. It's fine.
Me: Well -
HG: Now I'm gonna show you something. You try this. You love it. [gives me a sample of the Kalamata Olive hummus]
Me: Well, I don't care for olives . . .
HG: [looks at me as if I just spit in his hummus]
Kacey: I'll try it.
Me: [Nooooooooooooooooooo, Kacey!! Run!!!!]
HG: You two together? Ok, I give you good deal. You buy together and I give you good deal. No problem.

Anyway, before I knew it, there were like 8 tubs of hummus stacked up for me. I tried more hummus than I ever thought possible: Basil Pesto, Avocado and Cilantro, Roasted Garlic, Roasted Eggplant, Sun Dried Tomato & Basil - you name, I tried it. And almost bought it. But I finally had to put my foot down and . . . and . . . and only buy four. Because I'm a tough cookie. Then he tried to sell us pita bread, pita chips with parmesan cheese, pita chips with garlic and oil, plain pita chips, and baklava. I came THIS close to getting my suitcase from the car so that he could see how little room I had left. He kept assuring us that he was going to give us a good deal. In the end, we bought $35 dollars worth of hummus together and he gave us $3 off.

$3. That was his "good deal" that he kept promising.

So only I can go to a Farmer's Market on my way out of town and end up with four tubs of hummus to stuff in my suitcase. I opened up my suitcase and fashioned a protective casing out of a ziploc and two plastic bags. Since I frequently find that my shampoo has exploded at some point in the flight, I had every reason to believe that every item of clothing I had in my suitcase would be covered with hummus by the time I got back home. But, as it turns out, hummus travels pretty well and I didn't even have to wash it out of my clothes.

Oh, and did I mention that I don't really even LIKE hummus that much?

You've just experienced shopping at the bazaar in Turkey. It usually works well on tourists, because as Americans, despite popular notions, are very polite. We hate to tell people no. I've actually become very good at ignoring the soap people at The Woodlands Mall.....

Only you Catchy! I'm still laughing,picturing that guy loading up the table with every "yum" you uttered! Have you cracked any of them open since you got home? :)