As I told y'all last week, I went on a tornado-chasing tour this Spring with a team from the Discovery Channel show Storm Chasers. Since the new season of Storm Chasers started last week, I thought that I'd re-cap my adventures for you each Friday to remind you to DVR the show on Sundays and watch it along with me!

Ok, so here is my report from Day 2 of my trip:

Well, today was Day 2 of my tour and, since we didn't have any storms to chase, we started our day with a fairly in-depth lesson on weather and reading radars. I tried to pay attention but, despite my best efforts, my eyes glazed over about five minutes into the lesson. But I tried hard for those five minutes, I PROMISE. One of our tour guides, Matt, was teaching us terminology that we'll be hearing while we're chasing but I had a feeling that I would be more likely to hear terminology of the four-letter variety once the chasing began so I wasn't too worried about memorizing the new vocabulary. Matt told us that there's a good chance we'll have baseball size hail and that it will bust out the windshield. He said that the two people in the front will have to put their feet up on the windshield so that it won't fall in on them. Ummmmm . . . guess who WON'T be sitting in the front!!

We'll be chasing with Reed Timmer and Chris Chittick. Reed is the head meteorologist of the group and he is the guy the Discovery Channel followed on the last season of Storm Chasers. Chris is his friend who chases storms with him and handles the business components of their business. Last season, Reed and Chris drove a Tahoe but this season, they're driving the Storm Research Vehicle (SRV) or "the Dominator." Here's what it looks like . . . 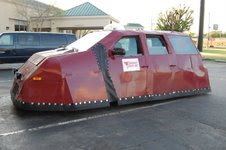 The SRV is a new tornado intercept vehicle that can . . . well, intercept a tornado. Good name for it, right? The flaps on the bottom are on hydraulics and can lower to the ground so that wind can't get under the vehicle and lift it. It's basically an armor-covered Tahoe with all kinds of high-tech stuff inside. The van in the background is what I'll be in - notice no protective armor or hydraulic flaps . . .

Not only are Reed and Chris going to try to intercept a tornado (which means get inside one), they are also going to try to deploy their camera probe. (Yes, I just said "probe.") Here's a picture of it: 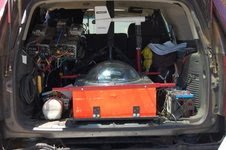 Since we weren't going to chase, we headed down to Dallas to hang out. We went to some place called Speed Zone which is basically go-carts and arcades. I played putt putt with two of the guys who are on the trip with me and, I'm proud to say, I beat them by 4 strokes, thankyouverymuch! So it was a pretty low-key day but the northerners in our group got to come to Texas AND eat chicken fried steak so it was a successful day!!

Speaking of the Northerners and food . . . we had Mexican food in Oklahoma for lunch (no, it's not as good in Oklahoma as it is in Texas . . .) and the waiter brought out chips and tortillas with the salsa. I took a tortilla and started to butter it when the northerners in our group asked me what we were supposed to do with those. They said they were just waiting to see what everyone else did because they didn't know what they were for. Can you believe that?? What kind of life is a life without TORTILLAS?!?!? I said a silent prayer thanking the Lord that I was born in Texas. And that Lupe Tortilla's is within a 10 minute drive of my house in case of tortilla emergencies.

The redneck guy I told you about continues to be a fountain of . . . something. He is perhaps the most obnoxious person I've ever met. Our tour guide apparently called the hotel ahead of time to warn them about him, too!! It's crazy. Imagine the most obnoxious, drunk red neck you've ever seen in a movie and then multiply that by 10. Except this guy's not drunk. My ears were assaulted by him all day long and, at one point, I had to resist the temptation to claw my way out of one of the windows. I spent the entire day making notes of things that he said and did so that I could share them with you. I was trying to decide which story would best sum him up but I can't. So I'll let you . . .

1. At the Mexican restaurant we went to today, he would NOT let the waiter refill his tea. He was actually quite rude about it, holding his hand over his cup and saying very slowly "I don't want anymore" without looking at the guy. After we paid, our waiter said "I have just one more question for you all - does anyone want a drink for the road?" The redneck said "We've already paid, right?" and the waiter said yes. Then Redneck said "Then YES I want one for the road!" and proceeded to laugh like he just pulled a fast one on the guy. I guess he thought all along they didn't have free refills and that the waiter was just trying to run up his bill??

2. On our way out of the restaurant, he walks up to the hostess counter, looking around and says in his loud obnoxious way and with an exasperated tone, "You ain't got free mints or nothin????"
3. The restaurant we went to tonight had its bathrooms marked "Roosters" and "Hens". I made a joke about having to try to figure out which one was the men's room and which one was the women's and then he says loudly, again in his obnoxious way: "Don't you know that one has a COCKadoodledoo??" But I have to give credit where credit is due - that one was pretty good.

The rest of the tourists are great and I'm enjoying getting to know them. We met the two other guys who joined our group. One is from Connecticut and one is from Massachusets . . . aka "the northerners." Everyone seems to get along so far so that's good. It would be bad to be stuck in a car for six days with people you don't like. Or a Redneck . . .

If I were on a bad grammar chasing tour, this would have been an active trip so far. The Redneck is a never-ending fountain of grammar violations. I've lost track of the number of "supposably"s, "ain't go no"s, and "we was"es. He had a spectacular sentence I wish I could have photographed for you. It was something like "Was you there? We was there but they didn't have no . . ." I missed the rest of the sentence when I began convulsing . . .

So Day 2 was pretty uneventful except that I bonded with my fellow tourists and learned about the varied uses of 'coon dicks. You know - the usual.

Will you EVER forget that guy??? I won't, and I wasn't even there! I love re-living it all with you! Going again next year?