Adventures on a Tornado Tour - Part 3

Here is my report from the third day of the tornado tour I went on this Spring. Don't forget to record Storm Chasers on the Discovery Channel thisSunday night!!

We left Dallas this morning around 9:30 and headed North to the Wichita Mountains and the Wildlife Refuge. It was really a cool part of the trip. We saw buffalo . . . 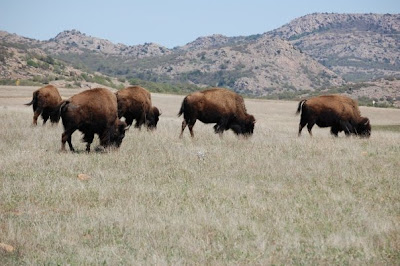 . . . one of the last remaining natural herds of Texas Longhorns . . . 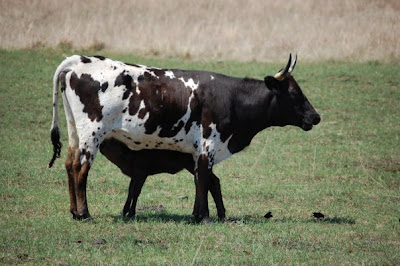 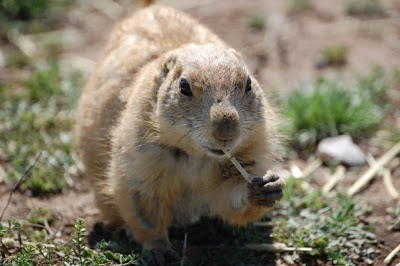 He looks like he's picking his teeth with a toothpick. Funny - I didn't see any 'coons around there . . .

After we had had enough of the Wildlife Refuge, we headed back to Norman, Oklahoma to tour the National Weather Service. Not so exciting but I was glad to be able to go. They actually have "Dorothy" and "D.O.T. 3" from the movie Twister there so that was cool. We also got to see them release the weather balloon and I was surprised to see that it's actually a balloon. I'm not sure what I was expecting - after all, they gave me all the information I needed by calling it a "weather balloon" - but I was not expecting an actual white balloon. 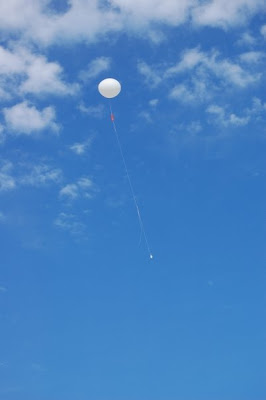 I watched it rising and wondered if they get their balloons blown up at Kroger's like I do. But then I decided that they probably have their own helium tanks, what with all the grant money and all. And then I realized that I have the dumbest inner thoughts EVER.

Redneck continues to provide color for us on this tour. Here are my highlights from my 5 hours in the van with him today . . .

1. Two of the yanks asked what this bird was and I said it was a vulture. He turned back to me and said "They are NOT vultures, they are buzzards." I tried to diplomatically point out that it had the red head characteristic of a vulture. He turned around and said "Believe me, they are buzzards. There are no vultures out here." Very matter-of-fact and with an air of superiority that really IRRITATED me. (Breathe, Catherine. Breathe.) I just closed my eyes and had an imaginary conversation where I told him to shut his pie hole, grabbed a nearby vulture, and then slapped him repeatedly with the vulture's RED HEAD. But that's normal . . . right? Later that afternoon, we went to the visitor center and walked through this little exhibit about the many species that were located in the refuge and I heard Rick (my new friend from Massachusetts) calling me, saying "Catherine, you need to come here now! It's vindication!" I walked over to where they were and there was a big, stuffed VULTURE complete with the little write-up about how many are in the refuge. I had to refrain from gloating - and you know that was hard for me to do!!

2. He told me I was wrong about chiggers, too, and I refrained from reminding him who was right about the vultures. I have googled the chigger thing and am proud to report that I'm right about that one, too. Perhaps I will report it in the morning . . . :)

3. All my questions were answered when he volunteered: "I hated school, man. I went for 12 years and never made it past the ninth grade." And then quickly followed up with: "I got my GED, though. Freakin' parole board made me do that." WHAT THE HECK?? Background check, people. BACKGROUND CHECK!!!

Shane is the Redneck - need I give any other information on this one?? I'm seriously so mortified that he hails from Texas. Rick is from Massachusetts and is probably mid to late 40s, I'd guess. He's great - I've had lots of fun hanging out with him. Mike is from Connecticut and he's been awesome, too. I played golf with Rick and Mike yesterday and had lots of fun with them - they are both really sweet and great. Cara is the other girl and she's from Washington state. She and Rick and I walked over to a convenience store tonight and were joking around. She seems like a fun girl. Eric is from Denver and he's been great, too. He just seems pretty laid-back and ready to enjoy himself. I've really had fun with everyone on this trip. Well not so much with Shane - he doesn't really know what to do with me and I really don't know what to do with him so I just write about him so that you all have to suffer through it with me. You're welcome.

The grammar continues to be awesome. And by "awesome" I mean "making my ears bleed." "Simularity" seems to be a popular word choice and there have been LOTS more "supposably"s, “ain’t”s and “we was”es. I just close my eyes, mouth "Why God? Why?", and try to think of home . . .

We passed up two stores that were funny to me. One was called the "Curiousity Shoppe." You would think someone would have spell checked it or at least looked it up out of CURIOSITY. It actually hurts me - like actual physical pain. The other store was called the "Turquoise Trousseau - Eclectic Gifts for the Gypsy at Heart." How's THAT for a niche industry . . .

We ended the night with some good Texas BBQ (in Oklahoma) and the Yanks really liked it. Rick keeps asking me what he should order because he thinks I'm three for three now: tortillas, chicken fried steak, and now brisket. So I'm glad the brisket did not let him down. I ordered some beans and they put them in a styrofoam cup with a lid on it. When I took the lid off, the beans exploded all over me. It was an awesome moment to share with my new friends - there I am wiping beans off of my boobs while they look on. Awesome.

We are staying in Norman tonight because our hotel in Oklahoma City was kind of shady. So we are staying in a Quality Inn here in Norman and, let me tell ya folks, there ain't nothing "quality" about it. I'm sitting here on the bed typing this email and I'm pretty sure I'm getting bed bugs. In fact, this email would have been finished quite a while ago if I didn't have to keep stopping to itch my head, legs, and arms. I keep trying to ignore it but then I can swear that I feel something crawling all over me so I break down and scratch in a fairly neurotic fashion. I have a crazed look in my eye and raw spots on my legs, arms, and head. I'd give anything for a microscope right now. And a picture of what bed bugs look like.

We head to Omaha, Nebraska tomorrow to get set up for the storms up there on Friday. We probably won't see any tornadoes tomorrow but we should see some hail.

Hopefully our windshield will make it!!!