I could never be a model. I mean, my main focus when I'm taking a picture is to make sure that I minimize the number of chins that will show up. That goal is all-consuming for me - I can't imagine having to focus on anything else. I would be horrible at it. You can't really flirt with the camera when you're sucking your stomach in, sticking your chin out, and praying that the camera only adds ten pounds to the girl standing next you.

But I think I would be better at it than some professional models out there. For instance, I get the White House Black Market catalog in the mail every month and it's always entertaining to me because there's a model in there who is TERRIBLE. I've never seen so many variations of an expressionless face. So I thought I'd share some of her pictures from this month's catalog . . . 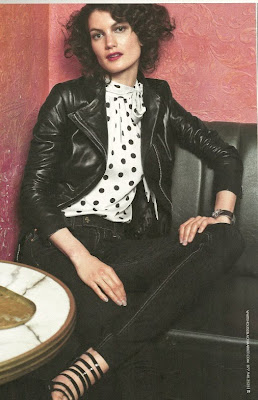 Isn't it amazing how there's absolutely no expression in her eyes? How does she do that? And she's a fan of the parted lips look, too. I think she thinks that somehow makes up for the vacuous stare.
When the empty stare isn't enough, there's always the Distant Gaze: 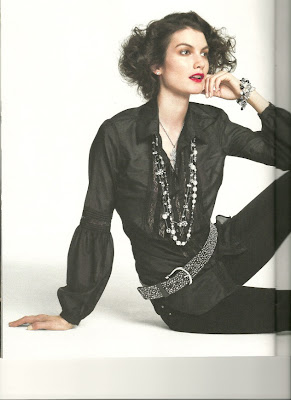 Notice the parted lips, again. Adds a nice "I'm in a daze and I can't get out of it" effect to the look, don't you think?
This is one of my favorites. I call this one the "Yes, the lobotomy went well" . . . 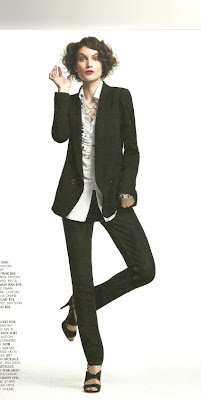 Now granted, she's having to balance on one leg but don't you think she could muster a LITTLE expression?
I like this one, too. I call it "I love my lithium": 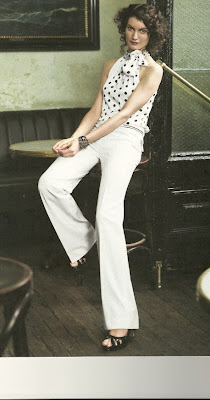 God love her. Even when she tries the seductive leaning-on-the-bathroom-sink look, she can't get her face on board.
You would think a big flower and the hand-on-the-hip move would give her the attitude she needs to eek out a little expression . . .

Not so much.
But she gave it her best shot on this one. I call it "When Irish Eyes Aren't Smiling." 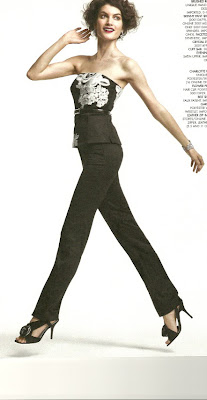 I don't know what's more amazing to me: the fact that she can have a smile on her face and absolute emptiness in her eyes or the fact that she appears to be levitating. It's a toss-up for me.
But I shouldn't be so critical. I'm sure it's very difficult to achieve the freshly botoxed look on every shoot.
Not as hard as hiding three chins . . . but I'll give her some credit.

I just think she's freakishly tall. She appears to be taller than most men I know. And she's supposed to make people want to buy the clothes she's wearing? How many people could put it off? I don't honestly think White House/Black Market caters to tall people, so they probably had to alter the clothes. I would love that store if only..... and I think you know what I'm talking about Catchy.

thought the whole things was hilarious BUT maybe we should cut her some slack. I mean, if my diet consisted of red bull and cigarettes, I would look empty too. I'm just sayin....