Signs" of a good weekend.

You know how the kid in the Sixth Sense sees dead people? Well, I see things, too.

I see spelling and punctuation errors. And bad word choices.
They're all around me. They assault me at every turn. Billboards, menus, fliers, weather alerts crawling across the bottom of the television screen - I can't help but see them. It's just the way my brain is wired. And it's a curse, friends - a curse. Some of you might be thinking that the kid in the Sixth Sense had it much worse than I do. But I would urge you to reconsider that hasty judgment . . . with the number of people out there who can't spell or punctuate, my curse is equally as frightening.
I went to Tyler this weekend to attend the wedding of a friend of mine. On our way out there, Jill and her husband Gardale and I stopped off at Canton. Have you ever been to Canton? It was my first time to go and it was interesting. On the weekend of the first Monday of each month (did I lose you? That one trips me up, too), there's a big market in Canton, Texas. I wanted to go but didn't really picture myself buying anything because it's not really my type of place. It's like a big flea market only better. There are lots of booths where people sell crafts, fabrics, jellies, yard art - pretty much everything you can think of.
Except for dictionaries . . .
As we walked around, I couldn't help but notice the spelling errors all around me. For instance, here's a man selling "knifes" . . . 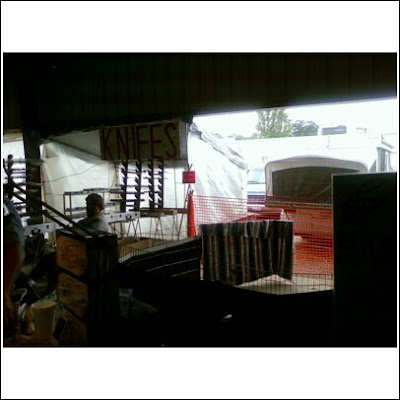 I just sighed, shook my head, and took a picture.
I decided that I would try my best to ignore the signs around me as they would only cause me to go into convulsions. I kept my eyes forward and saw the most amazing sight. A man was walking toward me wearing a white hat, a white shirt, white shorts, white knee socks, and white shoes. I waited until he passed and took his picture. I was a bit disappointed that it didn't turn out well - it really doesn't do him justice. As I was about to delete the picture, the sign on the right caught my eye . . . 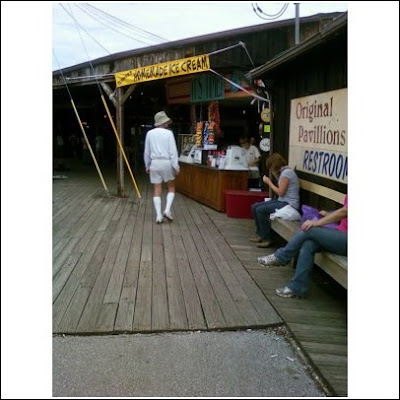 Maybe when they built the original "pavillions" they didn't have spell-check to tell them that pavilion only has one L? Or maybe they knew I was coming and they wanted to assault my eyes? I wasn't even trying to find that one - honestly. It just found me.
Now I have to say that not everyone in Canton had spelling problems. But some of them had other editing issues. Case in point: 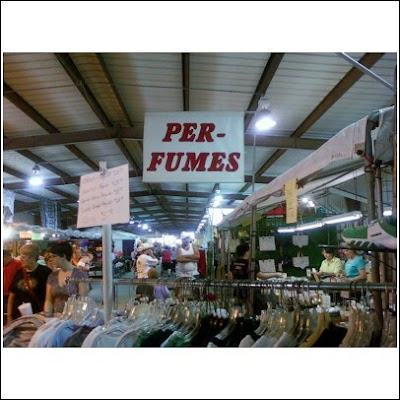 You know, in theory the 72 point font looks bigger and nicer but SOMETIMES you just have to suck it up and go with the 54 point font. Or get a longer banner. Again, I just sighed, shook my head, and took a picture. And then asked if I could go home.
4 flying monkey dolls, 3 pairs of diabetic socks, 2 necklaces, and one tungsten potato peeler later, we were back in the car and heading on to Tyler. I had hopes for Tyler - hopes that my proofreading curse would go into hibernation for a day or two. Surely spellcheck was more prevalently used in Tyler. Surely I would not see seven letter words needlessly hyphenated. Surely I wouldn't see any . . . well, crap: 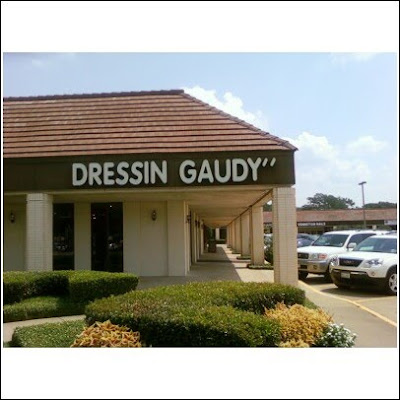 Where's the apostrophe at the end of "dressin'"? And what's up with the random quote mark at the end of gaudy? This is lazy punctuation, friends. Here's my theory: when the owner of the store was naming it, she would use air quotes when she'd say the word "gaudy." But when she was talking to the sign maker, she had a heavily bejeweled, gaudy purse in the crook of one arm so she could only lift the free arm to do the air quotes. And, having a very literal sign maker, that's the sign she got. I think it makes sense. The lazy air quote will get you into trouble every time . . .
A few doors down, we saw this: 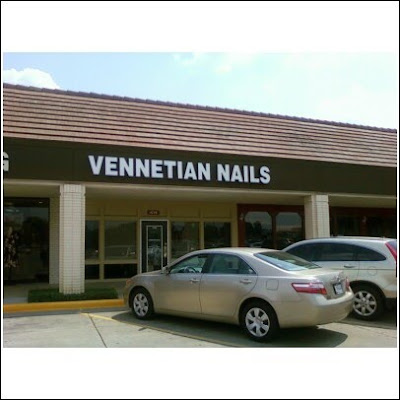 Not sure what nationality that is.
I decided, again, that I would just look ahead and ignore any and all signs around me. We decided to go get some barbecue so we went to Stanley's Pit Barbecue. I walked up to the counter, kept my eyes forward, and placed my order. The smell of barbecue filled my nostrils and lifted my spirits. I love that stuff! So I ordered my sandwich, gave her my name, and took my receipt, feeling my spell-checking woes slip away. And then I looked at the receipt . . . 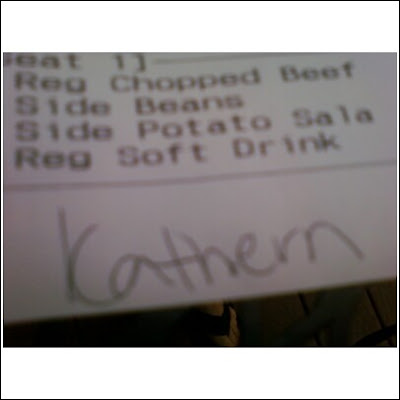 Honestly, I think that it must be something in the water up there.
On the bright side - the barbecue was AMAZING.
And don't judge me for ordering the potato salad. It was a tough day.

Labels: my travels, spelling and grammar

Loved it, Catch! I like the ones like this one about signs you find on your journeys....so some more!

oh my gosh..the dressin gaudy" is my favorite. Maybe she was on a low budget?? Maybe it's a "buy the punctation as we go" sort of thing?? This blog was HILLARIOUS"!

They should make some sort of special sunglasses for people like us. Ones that either fog up and don't allow us to see these errors, or that automatically fix them—for our eyes only.

There is a Vennetian something-or-other in Montgomery too. I want to stop in and tell them what idiots they are....but alas I make excuses for them instead. For instance: maybe it's named after someone who actually spells it that way?

Erin, that was HILLARIOUS". Nice use of the double L and lazy air quote - well played, my friend. Well played. And I like the theory of the "buy the punctuation as you go" - I think you might be on to something.

My friend Sara said that she thinks the guy in all white was just trying to get it all in before Labor Day. And now I have to hate her because I didn't think of that joke myself . . .

ok, so the "Dressin Gaudy" sign might have been missing some punctuation - but I think the open quote marks have been there before - I have never noticed them not being there before. I've driven by that store many times - but then again, I am not cursed with seeing spelling or punctuation errors!
I do have to say that you should've gone in there though. That is a FUN place to shop. It's a pretty popular and well known store in Tyler (and there are 2 or 3 boothes at Canton!) My sister in law has a booth at Canton too.

Ohhhh man. Them there is fightin words! Joley and I L-O-V-E Canton! FYI: Fuddruckers here in TW has a sign over their utensils that says knifes". We make fun of it every time we are in there.

One year they had a giant poster board up at our neighborhood school that read: School T Shirt's for sale! They weren't making many sale's though.

I can really appreciate this blog- I am like you- always noticing that stuff. It drives me crazy- even typos and poor spelling on Facebook updates drive me nuts! I wondered when I first noticed the title of this post- I thought, "that's doesn't seem like her to not notice she left off a quotation mark at the beginning!" =)

no, cat & erin, i'm afraid she's just ignorant. if she were a concerned of the English language, she would have saved up the rest of her pennies and applied all punctuation at the same time.

the thought of the rest of her sign being tied up in lay-away is pretty funny though!!

...concerned STUARD... (there's a typo for your next blog)