As I told you yesterday, I was in Tyler this weekend for a wedding. We spent Saturday morning running errands and taking pictures of bad business signs and whatnot. When we were done with that, we had a few hours left in the day before we had to start getting ready for the wedding so we decided to go to a local plantation for a tour.

Well, let me correct that. It was really my idea to go do something "Tylerish" while we were there. Jill said she was really just as happy to relax around the hotel but she'd go for me. I told her that I had read about a few of the plantations online the night before and had found one close by that does free tours. I assured her I had it all worked out and we'd be so glad that we did it. And in true Jill fashion, she said she was up for anything and went along happily.
So I plugged the Plantation's name into my navigation on my phone and we hit the road. About 30 minutes later, we arrived at Roseland Plantation. We pulled up the drive and admired the beauty of the main house. But we suddenly became worried that maybe we were on private property rather than historical property. Our suspicions were confirmed when we saw a sign on the side of a smaller house on the property that said "The Shaws." Actually, I think it said "The Shaw's" but I ignored it. Upon seeing that, Jill sucked in air through her teeth and said something like "I'm neeeeeeeeeeervous!!! I don't think we're supposed to be here!!"
I called the main number and asked about tours. Before the lady could answer, I told her that I had seen online that they offer tours and that admission was free but we didn't know where to go. That's when she told me that they only did tours at 10 am and that the tour cost $12.75 per person. I turned down the volume on my phone and smiled excitedly at Jill, hoping that she wasn't hearing what the lady was saying. Then I cupped my hand over the phone and tried to whisper to the lady that we were already here so could she please give us a tour so that I didn't look like an idiot FOR THE LOVE OF GOD. I winked at Jill and gave her the thumbs up.
The lady was so sweet and told us to walk up to one of the buildings and they'd give us a private tour. See - great things happen when you don't read websites thoroughly and just show up 6 hours after the scheduled tour . . . you get a special treatment!
I had three favorite highlights from the tour. The first was a lamp that the owner pointed out to us: 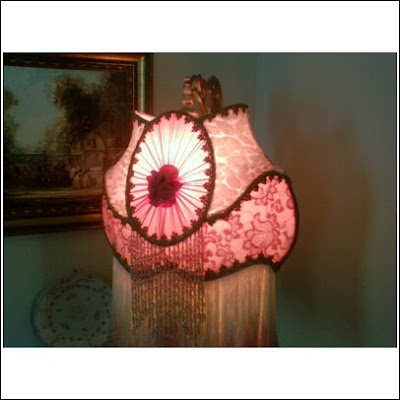 It's made from a corset. Check out the waist on that thing. I seriously don't think that I could fit that around my thigh. And can I just say that I'm not sure how I'd feel about my undergarments being made into a light fixture?
My second favorite highlight was this piece of furniture: 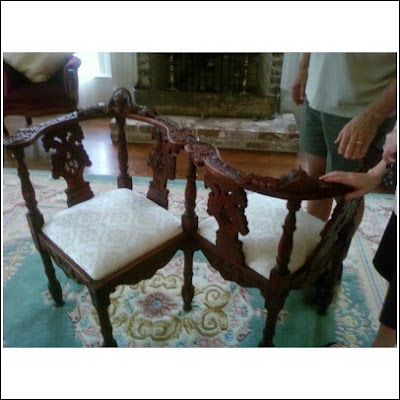 It's called a courting chair. Back in the day, the lovely couple would sit on either side of the chair and, you know, court. I've decided that I'm going to put one in my living room. Front and center. I figure if you have one of those, the courters will just start lining up outside . . . Right? . . . Right? It's worth a shot.
And my third favorite part of the tour was when the guy told us that the main house - you know, the PLANTATION HOUSE - was not on the tour because it's privately owned. Ahhhhhhhh - so THAT'S why we felt like we were trespassing when we first drove in. I smiled and waved at Jill and tried to change the subject.
The tour was great and we enjoyed ourselves despite all the setbacks. The owner made it a super-quick tour since we only had about 45 minutes before we had to head back to the hotel. After we were finished, we hopped back into the car and pulled out of the driveway. We waved at Ms. Shaw who was out raking her yard and we headed back to Tyler.
And now I know that it was a local museum that offered the free admission.
I was close . . .

Only you, Catchy, could get someone to open up and give you a tour when they were closed! :)

I thought about this way later. The guy who gave us the tour was great, but we never actually saw or met the "sweet" lady who answered the phone. I think she must have been mad at us. I'm sure the $12.95 each did a little something to sooth her. It WAS a fun adventure!

I have this courting chair that I am trying to sell!