Last year, I blogged about a mural at a local restaurant called the Grotto. I was there eating with my mom and our friend Vicki when Vicki pointed out the paintings on the walls. Once I started looking at them, it quickly became clear to me that, when the artist painted the mural, he was either drunk, high, sexually frustrated, or a combination of all three. So I shared those with you last year.

Well, I was there again recently and saw some pictures that I had somehow missed last time. I thought you might like to see some of the other scenes going on on the walls of the Grotto . . . 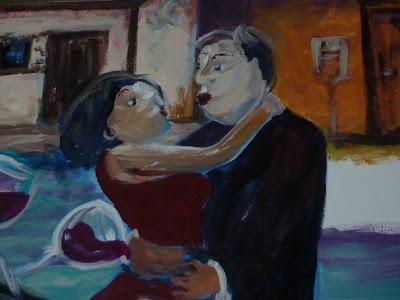 I don't blame her for not closing her eyes - I'd want to know if those things were coming at me, too. I'm not sure what his excuse is for keeping his eyes open, though. Unless that's the way he compensates for his inability to hear, what with his unfortunate lack of ears. 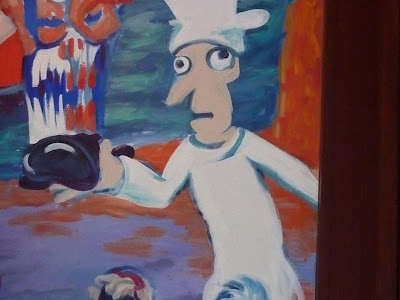 Seriously. I'm getting a migraine just LOOKING at that him.


Next ,we have what I call "The Harassment of the Grape Stomper." 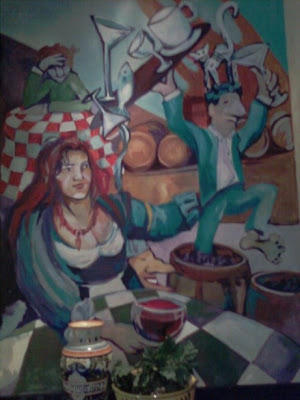 Okay. First of all, this guy was MADE for grape stomping - those feet are amazing. But he appears to have fallen into a bad situation. Here he is with his dream job, utilizing his giant green feet. But, alas, he has a boss who makes him balance a tray in one hand, hold a glass in the other and balance a cat on his head while she gooses him with her 20 foot arms. It's an all-too-common problem, people. All too common.


Then we have "Are You Compensating for Something?" 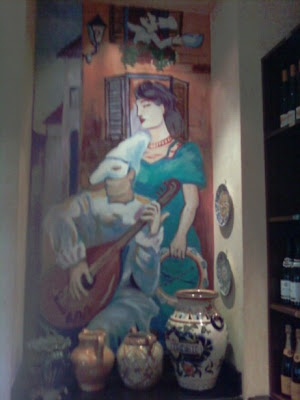 I love the love story depicted here. She stands quietly behind him, her tambourine ready. Her focus is so strong, her connection to him so unbreakable, that she does not even acknowledge the miniature chef above her who appears to be waiting for spaghetti to fall from the sky. She's prepared to support him in sickness and in health, through phallic nose phases, and through what appears to be a broken elbow of some sort. Love like that is hard to find anymore, folks.


Then there's the one I like to call "OhmygoshwhatshappeningatTable10??" 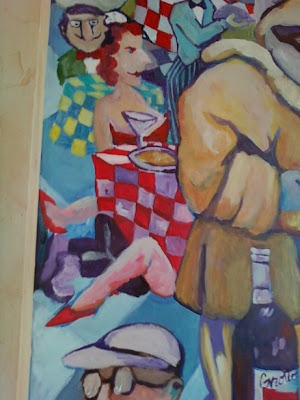 I have no words for this one. But I DO have a word for the guy in the top left: PERVERT. Seriously though - this is hardly compliant with Health Code regulations . . .


We also have the one I have named "The Pizza Stretch." 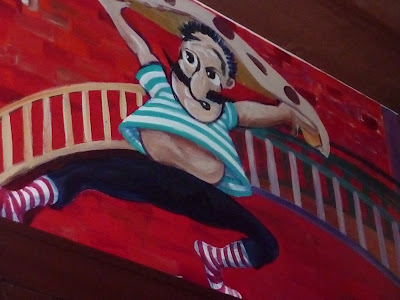 Hmmmm. Interesting . . . this picture may have cured me from every wanting another slice of pizza again.

And last, but not least, my personal favorite: "The Leg Transplant." 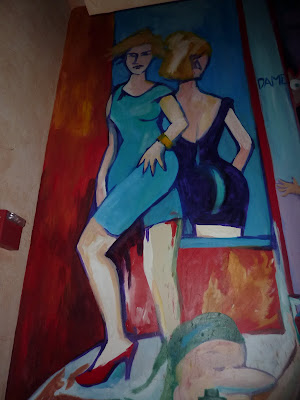 So there you have it - the rest of the characters from the walls of the Grotto. If you want to get to know these guys more, go check them out yourself!

I am laughing so hard I am crying. I love these restaurant art critiques! They are my fav raves!

Catherine, I wish you had the time to write a book. I'd be the first in line to buy it!

Ok, the first thing I was going to say was about the grape stomper picture. There is a wicked witch hiding behind the almost normal looking woman. BUT then I saw the table 10 picture and laughed out loud! How can the woman at the table possibly be sitting there with her legs not in the way? Why doesn't she get up and give them some privacy? teehee... too funny Catchy! Good stuff as always. Glad you aren't in trial this week!~DS

On that last one, I was so concerned that she had run low on feminine protection, that I didn't even realize the leg was in the wrong place.