The Greatest Show on Earth!!

My sister Erin called me a couple of months ago and had this conversation with me:

Me: Hey! What's up?
Erin: Hey! So, listen - I have an idea.
Me: Okaaaaaaay . . .
Erin: I think that you should start a book club.
Me: Okay!
Erin: And we can meet once a month to discuss the book at your house and you could make dinner for all of us. [pause] And dessert.

As I am one more club away from having to attend Club Starters Anonymous classes, I agreed to organize the group. So my mom and sisters and a couple of our friends are now in a little book club that meets once a month to discuss books that are picked on a month-to-month basis by a member of the club. Since the whole club was Erin's idea, I decided that she should pick the first book for us to read and she picked "Water for Elephants." So that was our book for June.

Have you read this book? It's about this guy who ends up joining the circus as a vet in the 1930s after his parents are killed in a car accident. It was really a good book and had lots of interesting information about the life of circus folk back in the day. Aaaaaaaaaaaaand it had lots of scenes depicting the . . . ummmmmm . . . "seedier" side of circus life. Scenes that I really don't want to have to discuss with a group of people.

And, ESPECIALLY, not with a group that includes my mom . . .

We scheduled our "Water for Elephants" meeting/avoid-eye-contact-with-mom meeting for July 6 so I started brainstorming about what I could serve for dinner. I'm a sucker for a good theme so I had a circus-themed menu in the works, complete with elephant ears for dessert.

As the meeting date approached, I was driving to work, and you'll never believe what I heard on the radio. No, seriously - you'll never guess. As if by divine intervention, the week of our book club meeting was also the first week that the FREAKIN' CIRCUS WAS IN TOWN. How were we supposed to pass that up?? How could we be meeting at my house eating elephant ears when we could be at the dang circus, watching it all played out before our very eyes??

So last night, we piled into the car, braved the weather, and headed downtown to Reliant Stadium to the Ringling Brothers' Zing Zang Zoom show. We had really good tickets and sat in our seats wide-eyed like little kids watching all the animals perform, the aerialists scare the bejeezus out of us, and the clowns make the kids laugh. It really was so much fun. It brought the book to life, for sure.

Aaaaaaaaaaaaand made me look a little more closely at some of the performers now that I know about the behind-the scenes stuff from that book . . .

ANYWAY, here are some of my favorite moments from the night:


The "Do Not Try This At Home" song:
Okay, so it appears that someone let the lawyer sit in on the Creative Team meeting. Every time - and I do mean EVERY time - there was something cool like the aerialists, the tigers, the elephants, or the high wire, an entire group would come out and sing this song in Christina Aguilera fashion: "Do. Not. Tryyyyyyyyyyyy. This. At. Hoooooooooooooooome." They even had it choreographed. Like so . . .

And each time they'd come out to sing it, they'd sing the whole stinkin' song. It got so annoying that I found myself actively planning to rebel against them by leaving the circus, buying an elephant, and riding around on its head.

Stop laughing - it could happen.


"Oooooooooooooh!! Cotton Candy!!"
Jill was sitting by me at the circus and saw the cotton candy guy walking around. Suddenly, she was like a 4 year old, saying "Ooooooooooooh! Cotton candy!! I need to get some cotton candy!!" She decided to resist the temptation the first time around but when he made his second pass by our section she said very seriously: "No - I'm gonna get some cotton candy." Because she's pregnant and sounded VERY determined, I helped her flag the guy down. He walked up and gave her a little bag of cotton candy and then said: "That'll be 12 dollars."

I almost put some cotton candy in my mouth just so I could choke on it for effect. I'm not a cheapskate or anything but, for goodness sake . . . TWELVE DOLLARS? But at least it came with a hat . . . 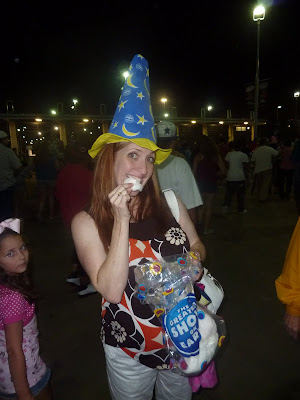 Seriously - if I'm gonna pay that much for a little bag of cotton candy, it better give me a massage. Or have a cute brother.


Yikes!!
The high wire was definitely one of my favorite parts. But it was a little nerve-racking. Especially when they did stuff like this . . . 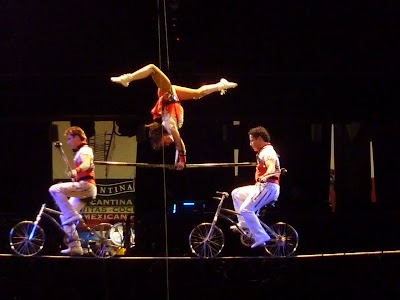 I really don't understand how they do it. But that's not surprising because I failed the balance test on my Wii. So, understandably, they are QUITE impressive to me.


The elephants!!
Of course the elephants were the highlight. We loved the elephant in the book that we read so it was cool to see them all right in front of us doing things like this: 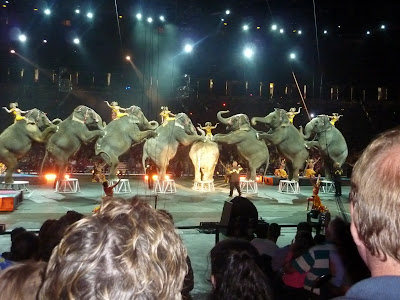 Then they stood on their heads. When we saw that they were all about to do head stands, we were super impressed and super excited. I think I even heard a collective gasp rise up from our group. But THEN we realized that we were DEFINITELY on the wrong side of the elephants to enjoy the headstand. Our faces went from awe and admiration to looks of disgust and confusion. You don't ever want to see that part of an elephant, friends. Ever. Take my word on that one. We'll have nightmares about it for years.


Anyway, it was a great show and a great night to spend with friends. We left the show feeling childlike, $12 poorer, a little more knowledgeable about elephant anatomy, and all agreeing that it truly is the greatest show on Earth!!