You have a little something on your chin . . .

When you have 10 hours of Olympics to watch everyday, you have to be pretty picky about which events you watch and which ones you fast forward through. I usually just watch the fast-paced events where there are more possibilities of seeing someone fall.

Don't judge me - you like watching people fall, too.

One of the events I never watch is the Biathlon. In fact, I usually make fun of it. I say SUPER clever things like "Biathlon? How 'bout BiathNO." and then I fast forward through it. I mean, I just don't get the appeal of watching a bunch of people ski and shoot. Who came up with that idea? It's like some redneck went to Colorado to ski and said "Well, I have to admit that this skiing thing is pretty fun. But what if I run into a deer while I'm out there?" I just don't get it.

I had heard that America has never won a medal in the Biathlon so, instead of fast forwarding, I decided to watch a few minutes of it the other day just to see what it was all about. And, surprisingly, I found myself quickly sucked in. I winced when they missed their shots and shrugged my shoulders in rhythm with their strides as they skied uphill. I don't know why my shoulders were getting involved in the action, but they were. By the end of the race, I was an admirer of the Biathlon and decided that it was pretty entertaining to watch.

But I can never watch it again. Why? Because these men let drool and snot drip down their faces throughout the entire race and it's disgusting . . . 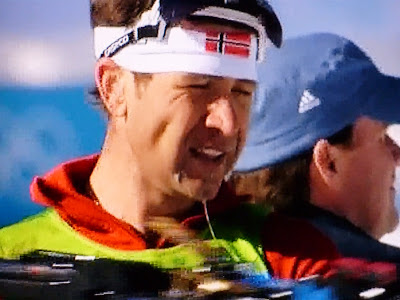 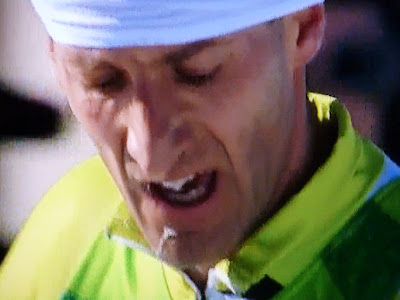 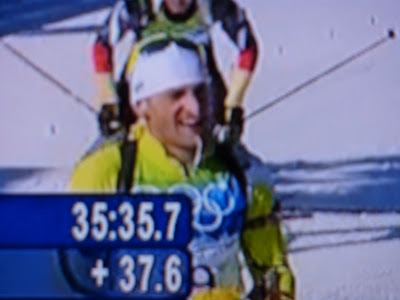 Seriously? When you win the Silver medal with a foamy saliva goatee, your accomplishment is somewhat diminished, don't you think?

no ma'am. that made me throw up in my mouth a little. so sick.

What do you expect from a Norwegian?

Ugh. My throat is a little thick now after reading that. Yucky.