I had to take my dog to the vet on Sunday because he was having some problems. I'll spare you the details but suffice it to say that he had to sleep in the kitchen for a few nights in case of any "accidents." Anyway, since my vet was closed on Sunday and it was sort of an emergency, I ran up to the pet hospital up at PetSmart. As I walked up to the vet's front desk, I noticed with much surprise that the floor in front of the desk looked very . . . ummmm . . . soiled. Like there was a stomach bug going around and all the dogs in the neighborhood were in for a little look-see. It was quite disconcerting. I mean, I get that we're in a store where pets are welcome but that was just a little much for me . . .

The vet came in to look at Jacques (that's my dog) and I watched him take a stool sample. Have you ever seen this done? They take a long plastic instrument that has a loop at the end - it kind of looks like the eye of a needle, only bigger - and they stick that thing up your dog's . . . ummmm . . . rear. Then it comes out with poop in the little eye of the needle-looking thing. I always hate to watch it but I can't seem to make myself look away - the horror pulls me in like gravity. Anyway, the vet did that to Jacques, who just looked up at me with a humiliated expression that seemed to say: "What the heck did I ever do to YOU?" At that moment, I thanked the Lord that I'm not a dog. I mean, the sleeping-and-eating-and-sleeping-some-more gig would be nice but, really, the first time someone tried to stick that thing up my REAR, I would say "Forget this! I want a job and opposable thumbs!" And then I would bite the hand at the other end of that plastic thingy.

Anyway, we came out of the little vet room about 2 hours later - no exaggeration. I was SO tired of playing Bejeweled on my phone by the time we were done. As we walked out of the room, I noticed that some dog had peed all over the floor in front of our little room. It's like this dog walked by and said "That dog in there is getting violated in the worst possible way right now - think I'll mark my territory right here and REALLY make his day." I've seriously never seen so many accidents around that place - I was beginning to wonder if it was Incontinence Awareness Day at PetSmart. I gave my best "I can't believe someone would let their dog do this" look and stepped over the little pool o' pee and went on my way.

I thought I would buy my dog a little candy cane bone to enjoy for the holidays, especially since he'd just had such a traumatic experience. So we went over to the holiday display and looked at the different types. I was talking to my dog while I looked at them, saying things like "Well, this one is kinda cute, Jacques! But THIS one has more red on it . . ." You know, things that make me look crazy. Then I looked down in time to see him hiking his leg up and peeing on the bottom row of candy cane bones. Awesome. I hissed out my best "No!" and then followed it with my best stern look. He just looked up at me innocently, as if to say "Hey, when in Rome . . ." And I really couldn't argue with that. In fact, I thought about peeing there myself just to make the experience complete . . .

Despite his atrocious lack of etiquette, Jacques DID get his candy cane bone. And since his stomach has finally settled, he finally got to enjoy it tonight: 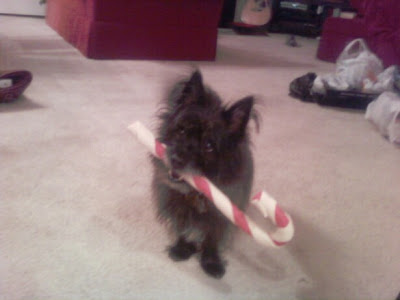 I think he likes it and I'm glad - it was the least I could do to compensate for his humiliation.

And, don't worry - if you ever have a plastic thing shoved up YOUR rear to get a poop sample, I'll buy YOU a candy cane, too.

See, this has always been my concern about these pet stores that let you bring in your pets. One dog goes rogue and decides to mark his territory, and then it's open season and suddenly everyone's doing it (well, hopefully not any two-legged creatures in the store, but you never know . . .)!

And I am very proud of Jacques for NOT biting the loop thingie--or the vet!

I feel the same way, Ellen! I can tell you from experience that it IS a chain reaction!!