I do love a door.

I wasn't able to get out for any Christmas shopping until about 6:00 this evening. Luckily, everyone has started their "Holiday Hours" so I was able to shop until about 8ish. You should have seen me - I was the fastest shopper this side of the Mississippi. I was quite impressed with myself.

My sister and I finished up at the mall just before it closed and then we decided we'd head on over to Old Navy to look around at what they have. But I really had to go the bathroom. I mean, it was BAD - it was like every glass of water I'd ever consumed had passed through to my bladder at the same moment. So we walked up to the bathroom by the food court because it's the nicest bathroom at the mall - relatively speaking, of course. I walked into the bathroom and headed for the first open stall I could find. Normally, I would examine each stall and pick the one with the fewest amount of disease-catching possibilities. But this was an emergency so I just had to go with the first one. I walked into the stall and turned to shut the door.

But there was no door.

Nor could I find any evidence that there ever WAS a door - no hinges, no hardware. It appears to just be a random, doorless stall in the middle of the bathroom: 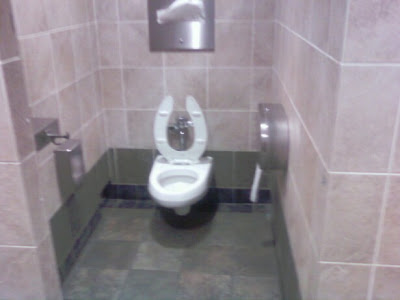 I stepped back out of the stall to look around and make sure that I hadn't accidentally wandered into a women's prison unit.

Nope, I was still at the mall.

And that was a relief for a lot of reasons. I mean, I had to go too badly to worry about trading cigarettes for protection now.

It was in that moment that I realized that I could never make it in prison. NO DOOR??? I mean, how do people go to the bathroom with everyone watching? Would they let me fashion a screen out of a towel like I did for the glass shower door in my college dorm so that I could have some privacy? Would my cellie stand watch and let me know if someone was coming so I could hurry up before anyone saw me? Would my cellie be a nice girl who was in prison for rescuing too many puppies or would it be a woman named Butch who used to ride with the Hell's Angels until she murdered a family of 4? Would Butch let me hit my snooze for an hour and a half like I do now? Would the other prisoners hate me because of my snooze-button habit? When my fellow prisoners talked about the good ol days in juvie, would I talk about how I was tardy to class a few times in junior high? Would they hate me for that, too? Would I have to get a tattoo to fit in with everyone and make them like me? Would the tattoo be a picture of butterflies and daisies or would it say "Property of Butch"? How would I -

But my musings were interrupted by the most heart-felt rendition of the pee pee dance I've ever done. So I ran to the next stall.

And shut the door. The glorious, metal door that no one could see through.

Then all was right with the world again . . .

Those are decent bathrooms, but my favorites are in Dillards. Not only are they clean, but rarely busy and well-lighted.

I rarely shop in Dillards, because unless it's on sale, it's too expensive. But I do make regular visits to the ladies room there.

I have never noticed the doorless stall...gross!! LOVED the prison musings!