After church on Sunday, my friends and I went to lunch at a Mexican restaurant called Casa Rico's over there by The Egg & I. I think it's owned by the same people who own the Rico's where the Creepy Little Village was so I was excited to see if they had any good artwork there. I walked in and saw two murals on the walls in the entry and was disappointed to see that they were pretty good. Bummer. I had had such high hopes!!

Shortly after we sat down, I excused myself to go the restroom. As I was walking toward the ladies' room, I had my head down. When I got to the door and started to push it open, I looked up and was greeted by this: 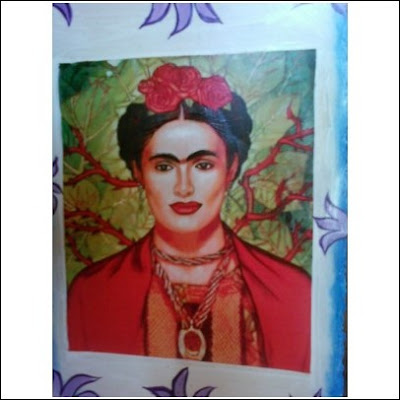 Holy cross dresser!! Someone get me a pair of tweezers STAT! I haven't seen a unibrow like that since . . . since . . . well, I've NEVER seen one like that! I actually stepped back to make sure I wasn't at the men's room by mistake.

Then I looked over at the men's room, wondering if they had an equally disturbing image. I was not disappointed: 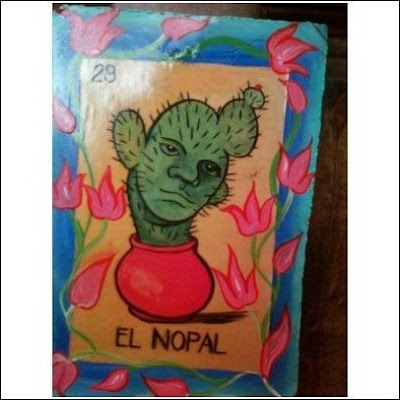 What the heck is that?? How is ANYone supposed to be able to go the restroom after seeing that thing?? I know I couldn't . . .

After my unsuccessful trip to the restroom, I returned to the table. On my way back there, I noticed a picture of a mariachi band. I have decided to call this one Mi Guitarra Muy Grande: 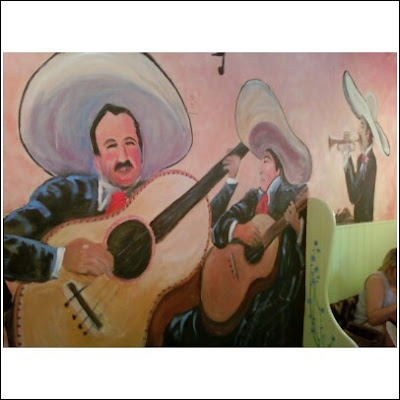 How is he holding that thing up?? And check out his left hand - it's freakishly small. Poor guy's gonna get a hand cramp trying to play that thing. Clearly this artist is at least RELATED to the one who drew the likes of Slopey Shoulders boy and the Young Amputee. Right?

Then I saw the little girls making tortillas and I KNEW they had to be related to the creepy villagers: 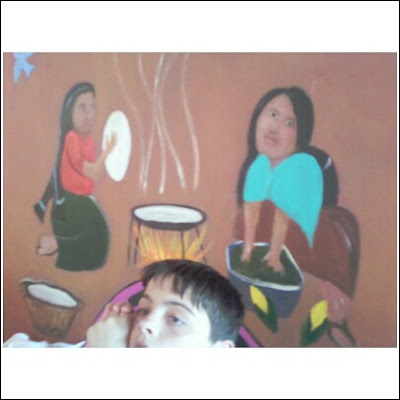 I mean, it's bad enough to be born with no elbows OR no neck OR a large head. But to have all three at one time?? That's unfortunate. Add to that a lop-sided face and shoulders attached to your chest and you have a very sad situation. It's hard to enjoy your tortillas when she's looking at you so sadly like that as if she's trying to say "Please, no more tortillas. Every time you order more, I have to make them. With no elbows." And what's going on with the other little girl's foot? Is she related to pig hoof guy? Yes, these two are DEFINITELY refugees from the Creepy Little Village genocide. 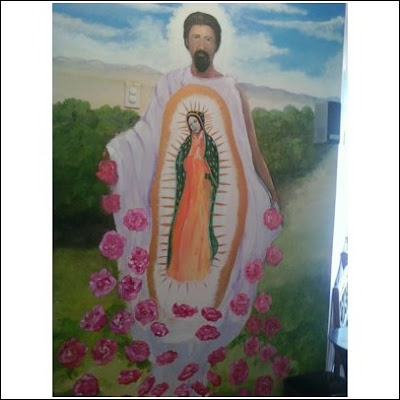 I really don't know what to say about this one. I mean, did Jesus get that picture of Mary screen-printed on his garment? And since when did Jesus start wearing the open-shouldered Flashdance look?? This is quite disturbing. And a bit sacrilegious, I think . . .

The other pictures in the restaurant are actually pretty good drawings so this was all I could get. Granted, they aren't as good (and by "good" I mean "bad") as the original ones over at the Rico's in Alden Bridge BUT they are an entertaining substitute, aren't they?

And I don't know about you, but I appreciate my tweezers and my elbows A LOT more now . . .

I almost choked on my bagel as I read this this morning! Too funny!

Holy Cross Dresser was my favorite!!!!!

Totally LOVED Holy Cross Dresser, too!! That actually could be my "favoritist" line of all!

Ok! My favorite was the, "Please, no more tortillas! Everytime you order, I have to make them." Laughed so honking hard at that one.

I loved all of these, too, but Jesus in the bedsheet was my most favorite one.

I think that crazy cross-dresser might be this lovely lady:

Salma Hayek played her in a movie, and they had to create a unibrow for her! :)