Friday in DC was a lot of fun - we squeezed as much in as we could AND enjoyed an awkward moment or two. Because, let's face it - no Palmore vacation is complete without a few awkward moments . . .

On Friday morning we went to Mt. Vernon, George Washington's homestead - what a cool place that was to visit!! I've always loved learning about the American Revolution and I've recently discovered that I love learning about our Founding Fathers, in particular, so I really liked being there. We watched a brief introductory video about the ORIGINAL G Dub and then headed over to tour the mansion. We were waiting in a long line outside the house when we had our first awkward moment of the day.

As we were standing in line, a lady walked out wearing a tiara and a beauty pageant sash that read "Ms. Senior America" or something to that effect. 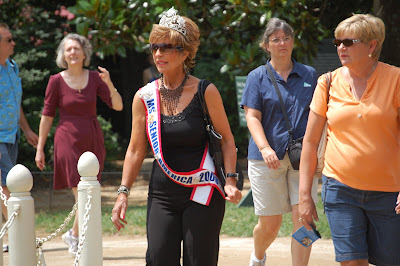 She walked past us and we found ourselves caught in an uncomfortable eye contact with her and forcing ourselves to smile as if we gave a crud that Ms. Senior America was among us. And then she did it - she did the pageant wave. It was so embarrassing. For her.

We headed back to the city so that we could hit the Smithsonian before it closed. We decided to start at the National Museum of American History and then try to get over to the Air and Space Museum. My mom was pretty determined to get through the exhibits quickly so that, in her words, "we can get to the Aerosmith one before it closes." That's "Air and Space", friends. We blew through exhibit after exhibit and stopped to admire Mary Lincoln's gown, the Ruby Slippers from the Wizard of Oz, and a poster of Stephen Colbert. Did you just do a double-take at that one? So did we. Not sure how he made it into the Smithsonian but he did . . .

We wrapped up at the National Museum of American History and decided to forgo the "Aerosmith" one because we were all tired and it was pretty late. So, instead, we headed over to a restaurant that had been recommended to Tammy. I forget now what it was called - Old Ebbert Grill or something to that effect. We had to wait a while for our seat and we were SO glad when they finally called our name and led us to our booth. Until we saw what we'd be eating by . . . 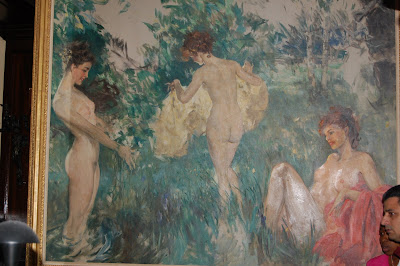 WHAT THE . . . Seriously - do I just ATTRACT bad art?? How can you enjoy your meal with this hanging over you? So many Health Department considerations just pop into your mind to distract you. Then you find yourself staring at it like it's a bad wreck and then looking away, wanting to assure everyone around you that you're not a pervert. But when you stand up in middle of the restaurant to take a picture of it, those assurances fall on deaf ears. It was definitely another awkward moment for us . . . thanks, for taking one for the team on that one, Erin.

Then we grabbed a cab back to the hotel.

I've decided that I could never be a cab driver because you have to be ok with awkward silences. And, as you all know, awkward silences kill my soul bit by bit. My mom and sisters are the same way so we like to ask our cab drivers lots of questions. Sometimes we got talkative cab drivers and we LOVED them - we had one who was a gardener and talked to us a lot about flowers and kinda wanted to take him home with us. And we had another who was chatty and imitated other people's voices by using his best Pee Wee Hermann bubble-in-your-throat voice. A bit awkward, yes. But we loved him, too, so we got through it.

Our cab driver from the restaurant that night was not very talkative and gave us yet another awkward moment. He was middle-eastern, pretty quiet, and not really sure what to do with a cab full of Palmores. My mom and sisters were in the back seat talking about Christmas and my mom, in an effort to draw him into the conversation, asked him what kinds of things he got for Christmas when he was a kid. I sunk down into my seat, incredulous that my mom had just asked a Muslim about his favorite Christmas present, and prayed that he would not declare Jihad on us. My butt clenched like it's never clenched before. But he handled it well and said "toys." My butt unclenched and I breathed a sigh of relief.

Saturday morning arrived and it was time for us to head home. We packed up and we headed downstairs to catch our cab to the airport. Our cab driver was GREAT - he was a Hispanic man named Rudy and we loved him. He gave us a bit of a tour of the area on the way to Reagan National and entertained us with stories about some of his previous passengers; he had driven "Chelseas" Clinton to the airport and said that she was a really nice girl and he had also driven a rich Texan who had given him a $700 tip for driving him to the airport.

So that was our trip. We got on the plane and got back to Texas safely - primarily because my mom read the directions on what to do if the plane crashed into water . . . 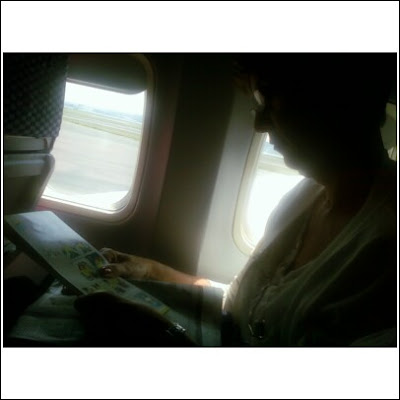 Ah, I do love traveling with my fam!!

I can admit it because I am "anonymous," I think the ladies in the painting AND Ms. Senior America are kinda hot. sorry