I've never been so worn out in my LIFE!! Well, that might not be true. But I AM worn out!! We spent a lot of time walking today but it was fun and we got to see lots of stuff. So I thought I'd share our day with you . . .

We're staying at a hotel called the Gaylord National. I know about 10 of you who will giggle at that name. Ironically, there is picture behind the front desk that I'm pretty sure is a drag queen: 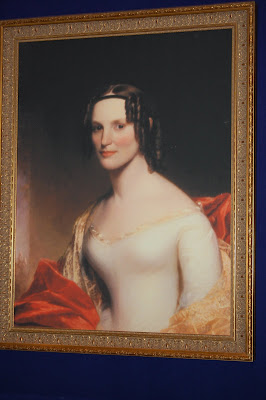 The manly jaw and the football player's neck were my first indications. I think if I had been allowed to get closer, I would have seen an Adam's apple. Your thoughts?

ANYWAY, we have lovely rooms that overlook the Atrium of the hotel like so: 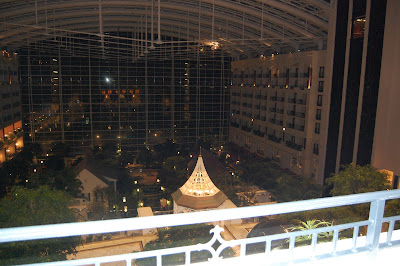 It's a bit like a small city! We've gotten lost a couple of times.

So back to our day . . . this morning, we left the Gaylord and the drag queen and went into town. We decided to take the Metro into the District and let me tell you, friends, you've never seen chaos until you've seen the 4 Palmore women trying to figure out the Metro system. But we did it and made some friends in the process, of course. In order to get over to the Metro stop, we had to take a shuttle from our hotel. By the time we got on the bus, it was full so we had to stand. I could tell we weren't in Texas anymore because none of the men stood up to allow us to sit down. I mean, I understand letting my sisters and me stand but someone should have let my mom sit, don't you think? But no such luck. I stood in the aisle and held onto the bar above my head and my armpit was dangerously close to the head of the man who was sitting in the seat next to where I was standing. At first I was concerned that he might not appreciate me airing out my pits so close to his face. Then I remembered that he wasn't being chivalrous so I made sure to get as close to him as possible and used my other hand to waft the air in his direction. But I'm not bitter or anything. :)

We figured out the Metro and took it to Union Station where we bought tickets for a double decker, hop-on hop-off, sight-seeing bus. We hopped ON one of the buses and were excited to see the city. Until we realized that the bus stopped LITERALLY every 15 feet. It was CRAZY!! It would stop at one museum and then go the next museum that was right next door and stop again. So we hopped the heck OFF of that thing and just started walking.

We had to fight the rain all day so we didn't get to spend as much time outside as we thought we would. But we did get to see a lot of the sights. We went to the Jefferson Memorial where my mom had some trouble going down the steps . . . 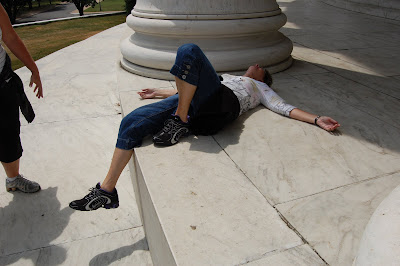 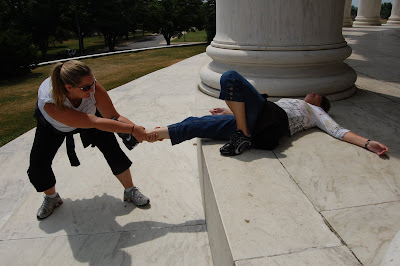 Then we thought if she was going to fall, we might as well stage it in an area that would give us a good lawsuit. 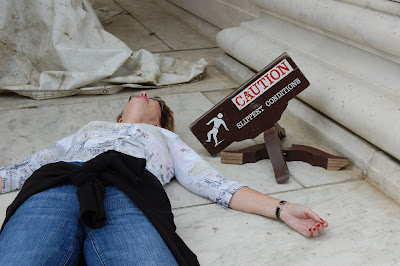 We left the Jefferson Memorial and decided to make Tammy get up in a pretty tree that we saw. Somehow that turned into a senior year photo shoot. 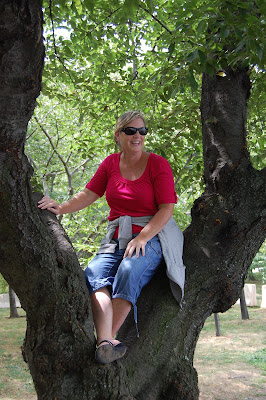 Eat your heart out, Ray Sakers!

Then we decided to try to get to the White House visitors' center before it closed so my sisters could get some gifts for the kiddos. On the way there, walking down Constitution, we saw the White House. And even though we were so far away, it was clear that there was a little black dog on the lawn and so we knew that was Bo - the First dog. Or "Bobama," as Erin calls him. Erin also swore she saw President Obama on the lawn. Since Erin somehow turned into a dang liberal during the last election, we had to double-time it so we could get close enough to allow Erin to try to kiss him. As we were walking, Erin's "Obama sighting" got more and more elaborate. It started out as "It was a tall, thin guy" and evolved into "He was wearing like a white shirt and nice black pants" and then turned into "And I think I saw him waving." Then she started sprinting - stinkin' Democrats. :)

"Obama" turned out to be a police officer with the uniformed division of the Secret Service. And I feel quite certain that he never waved. But we DID see Bobama . . . 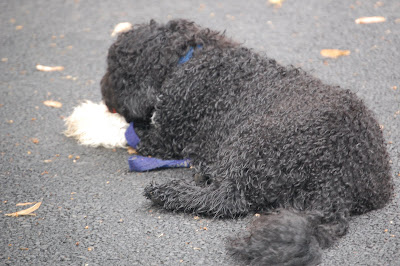 But the crazy guy was still my highlight.

We came back to the hotel and the skies just absolutely opened up. We had a great view of the lightning out the atrium of the hotel and the thunder was INTENSE. The hotel lost power a couple of times and when it did, the four of responded very maturely by squealing and running to the balcony so that we could see the people trapped in the elevators. I have a new love for glass elevators!! But the hotel would fix the power issue within a few minutes each time so we never got to see anyone panic - not ONE person started screaming and pounding on the glass. It was quite a disappointment.

HOWEVER, the trapped elevator people DID beat out the crazy guy for my favorite part of the day. I'm not really sure what that says about me . . .

So that was our day. Tomorrow we are hoping for better weather during the day so that we can do our tours, bad weather at night so we can eat pizza on the balcony and laugh at claustrophobics stuck in the elevator, and at least one crazy guy to entertain us.

Hilarious! I love the lawsuit photos; those are going to go a long way! And Tammy's senior photo is so pretty; she's going to be the hit of the 1988 yearbook with that one!

too funny and what fun! We did the double decker bus last year - it takes about 2 hours to complete the whole tour - since it stops so often, but it will take you to places you won't walk to - like Ford Theater, the Cathedral, Arlington Cemetary, etc...

I"m sure DC will never be the same again after you guys leave!

OMG!!! I still cannot believe you guys went and didnt tell me. Remember I lived there for a semester. I also could have gotten you amazing deals on hotels in the city!

It is a great city!!! Do as much as you possibly can and one of the best things to do is embassy row. if you can get a tour of an embassy its awesome too!!! You guys have fun and call me when you get home so I can hear all about it.
Christen

Christen, if you had FAITHFULLY read Catchy's blogs every day you would have known she was going. :p

And Catherine, you must really be worn out since you're first rendition of the word (warn)
was misspelled.
Thanks for sharing your trip.

I deserve that! I just sometimes have to catch up with the blogall on one day as my job is vvvvvery intense and time consuming. But i still feel as if Catherine should have given me a call as she knows I lived there. I mean I could have at least told her what clubs to take them to! JK I know you girls don't party. Well, except for Mrs. Palmore!

Thanks, Jill . . . I knew my fellow locals would get the Ray Sakers comment!!

Christen, sorry!!! I forgot that you had lived here!! I'm such an idiot! You would have been able to give me some good tips . . . because the hotel lobby was NOT a good place to pick up, guys! :) Tee hee!

Phyllis - my sisters took the liberty of pointing out ALL my typos but I was too "warn" out to go back and fix them!! :) Not good for someone who spends so much time making fun of other people's typos!! :)

Deborah - DC might be the same after we leave, but the cab drivers most certainly will not. We've had some who absolutely did NOT know what to do with the four of us in their cars!

And Ellen - HILARIOUS that you had a dog-sighting, as well!! It's way more exciting than it should be for people our age.