So much for positive reinforcement.

I recently started watching a show called "Heavy" on A&E. It's a show about people who have a lot of weight to lose so they go to a weight-loss facility for radical transformations. Each episode follows two people through their 6 month weight loss program. It's a pretty cool show - I find myself tearing up at least once per episode because these people really have to deal with a lot of different emotions as they're learning this new way of life. It's pretty emotional.

I'd like to say that it's been a really inspiring show that has given me renewed motivation for eating healthy and exercising regularly but, the truth is, it hasn't always had that effect. Sometimes I watch it and feel SUPER motivated, that's true. But more often than not, I find myself looking down at my belly and thinking "Man! I'm good . . . " It's usually on those nights that I sit on the couch eating Cheetos and saying something like "Daaaaaaaaaaaaaaaang that guy's fat!"

What? I love Cheetos. What can I say?

Anyway, the other day I was watching the show and I noticed something. At the beginning of each episode, they have the two patients weigh in for their starting weights. These are always big numbers - very rarely under 300 lbs. So it's a really tough moment for the two people who will be trying to lose weight - they're usually embarrassed by the number that pops up on the digital scale for all the nation to read. But the worst part about it is that the scale measures the person's "gross weight" but, unfortunately, due to some poor planning by the designers of this scale, the screen reads a little insensitively: 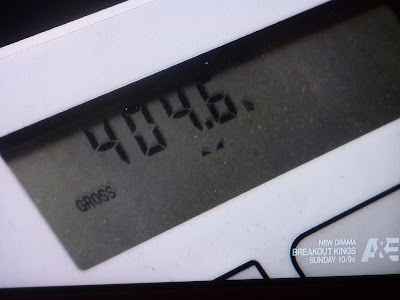 Someone did NOT think that through. I mean, it might as well say "EWWW" or "OMG" or "Hurry - get off before I break."

These Cheetos you speak of better be consumed:

1. During the hour following a trial verdict;
2. During the Super Bowl, Oscars, Golden Globes, SAG Awards, Tony's, World Series, Indy 500, Westminster Kennel Club Competition, or any of the Roasts on Comedy Central;
3. On Texas Independence Day;
4. On my birthday;
5. On your birthday;
6. On Audrie's birthday;
7. On my friend's uncle's cousin's nephew's (twice removed) birthday;
8. On vacation;
9. On a date;
10. On Halloween;
11. On Thanksgiving (Thursday thru Sunday, thankyouverymuch);
12. On Christmas (the whole month of December, thankyouverymuch);
13. On movie night;
14. On the 1st thru 4th Wednesdays of the month;
15. During the first 28 days of February;
16. On a day when we've already had Mexican for lunch;
17. On a cold day as an accompaniment to your soup;
18. On a day when you yourself have made Cheetos and need to taste them;
19. As a chaser for medication; and
20. During Girl Scout Cookie Season.