At the beginning of Spring Break, my sisters and I decided to meet at my mom's one evening to watch a DVD. I was planning to have cereal for dinner (don't be jealous) but needed a banana to put in it so I called my sister Erin to ask if she would bring a banana to my mom's. I was worried that she would forget, so I sent her a text a while later asking her to have my eight-year-old niece Savannah get me the banana because I knew that Savannah wouldn't forget. I call Savannah "Nana Nut" so my SUPER clever text said "Can you have Nana Nut bring me a nana??"

[pause for you to discuss my cleverness]

ANYWAY, apparently Savannah thought that my text was hilarious (well, naturally . . .) and, while Erin and the kids were on their way to my mom's, Savannah started this conversation:

Savannah: I have a good name for nicknames.
Erin: What do you mean?
Savannah: Well, people can make lots of nicknames out of my name. Like Catchy calls me Nana Nut . . . and GaGa calls me Nana . . . and Emma calls me Vanna . . . and some kids at school call me Sav . . .
Erin: Yeah - you're right!
Avery (5 years old): Yeah, and my name is good, too. Catchy calls me Avesy, Tammy calls me Aves, people call me Avey . . .
Erin: That's true!
Savannah: [bringing the conversation back to her . . .] I like the name "Sav." I think you could just name a little girl "Sav." I think that would be pretty.
Erin: [picking up the hint] Do you want us to call you Sav more often? Would you like that?
Savannah: Yeah.
Avery: Yeah - and I think you should call me "Abby."
[confused silence]
Savannah: Okaaaaaaaaaaay. Ummmmm . . . that has nothing to do with your name . . .
Avery: Yes, it does. It starts with an A and ends with a Y.

And she's serious about it. In fact, later that week they were at a Which Wich (sandwich shop where you fill out an order form and then they call your name when your order is ready) and, when Avery filled out her order form and handed it Erin, she discovered just HOW serious Avery is about this whole Abby thing . . . 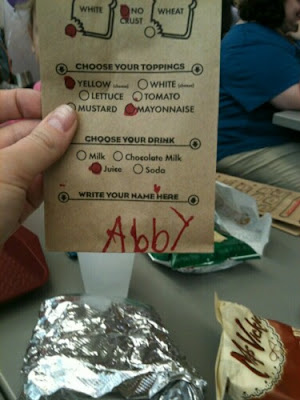 I love that your nieces and nephew call you "Catchy". That is too cute. I have one nephew that called me "Klassy", and one nephew who used to reverse my name and call me Thaky (thocky). I LOVED it. Now they're all grown up, and I'm trying to get everyone to call me "Kathryn". Sounds like you have great fun with your nieces and nephew! Have a great weekend!

Found your blog through Lincee's link, and so glad I clicked because it's hilarious! This one made me really laugh- "Abby's" determination is impressive.

Yay! Well, thanks for clicking and reading! :)