I spent some time tonight looking at some pictures from the cruise my family and I took this Christmas and it made me realize that I never finished telling y'all about our time there. I mean, I told you about all the grammar and spelling mistakes I found on the trip (after all, that was the most important information to relate to you immediately upon my return . . .) but I never told you about what we did when we were in Mexico. So allow me to rectify that . . .

Our first trip off the boat and into Mexico was at a town called Progresso. Nothing too exciting there but we DID go into Merida, which is the capital city of the Yucatan. On our drive to and from Merida, we saw some signs that were a little alarming at first . . . 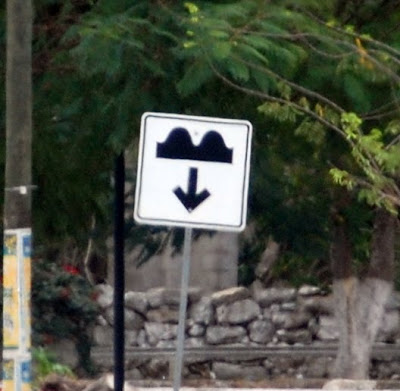 But, once we were able to stop giggling long enough, we figured out that this is the Mexican way of letting you know that you're coming up to a speed bump.

As we were driving through the city, we saw that there were lots of police officers standing around holding machine guns. It was really disconcerting and very strange. Later, our tour guide explained to us that there was really no violence in Merida at all. My mom took the SUPER non-confrontational approach with him and said "Well, if you don't have any violence, why are there police standing around with machine guns?" Because I was unsure about whether our tour guide was affiliated with any drug cartels, I began trying to distance myself from my mom by talking to other passengers in a loud voice, saying things like "Who is that crazy lady who's asking all the questions?" or " I think SOMEONE might be a little loca, riiiiiiiiiiiiight?" or "¿Cómo se dice 'drug lords rule' en español?" Things like that. And I think it worked . . .

The next day we went to Cozumel and spent the day at the beach. The weather TRIED to cooperate with us but it was still just a tad on the cool side because the sun kept hiding behind the clouds. But it was really a beautiful day to spend on a beautiful beach. They had a trampoline in the water and some inflatable slides so the kids had a blast running in and out of the water and playing on the equipment. But the water was too cold for me. So, instead, I went parasailing.

It was pretty cool to be floating above the ocean, getting a bird's-eye view of the world. But I was too scared to let go of the parachute straps long enough to really take any pictures. So, consequently, the best shot I got was this: 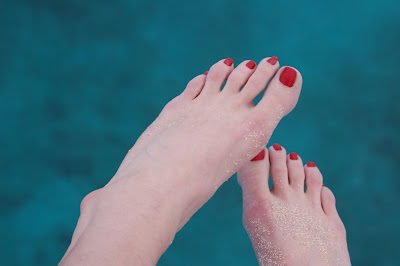 But, as I was up there longer, I started to feel more and more comfortable and safe - I mean, it was just a nice, relaxing ride. That's all - nothing too dangerous or scary. Just nice and relaxing. Aaaaaaaaand just as I was getting my courage up to let go of the straps and totally relax, I happened to read the warning label on my harness: 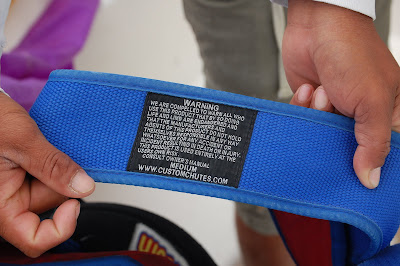 I mean, I appreciate the need for a warning label. But starting it off with "We are compelled to warn all who use this product that by so doing life and limb are endangered" seems like a bit much, don't you think? And then, as if to mock me as I float hundreds of feet in the air, it tells me to consult the owner's manual. CONSULT THE OWNER'S MANUAL? Is that sarcasm? Are they trying to be funny?? Dang lawyers . . .

I think my favorite part of parasailing is the fact that, when I came back down, my mom was waiting for me on the pier and had decided that SHE wanted to try it, too.

So in one of the most shocking turn of events of the trip, my mom went off in a boat, strapped herself to a parachute, and flew over Cozumel. If you know anything about my mom, you'd understand that this was a big stinkin' deal. I mean, first of all, she can't swim and is afraid of the water. This is the woman who is convinced that she'd drown if she fell into her 5 foot pool because she'd get disoriented as to which way was up and which was down and, consequently, wouldn't know which way to swim. So flying over the ocean was a big deal for her. And, second, she's usually so focused on all the ways any given activity could end in a tragic death. So I was shocked that, rather than shaking her head and denouncing it as a death trap, she actually WANTED to do it at all.

And then I was shocked that she did it.

She decided to take Erin with her so they rode tandem. One of my favorite lines of the trip came from Erin after she and my mom got back from their parasailing adventure:

Mom: Weren't you scared that we were going to drop into the water?
Erin: No - not at all.
Mom: You weren't?? I was. I kept thinking that if we dropped, I'd have to figure out how to get the parachute off of me so it wouldn't pull me under.
Erin: Oh no - I wasn't worried about that. I was just thinking how I'd have to get the parachute off so that I could swim after you and tell you which way to swim . . .

But as fun as it was to have my mom parasailing in Mexico, I have to admit that it shook the very foundation of my world a little bit. And when we got back home, I felt myself really struggling with it. I mean, if I can't count on my mom to rattle off three tragic parasailing death stories as I strap on a parachute and take off in a boat, what CAN I count on?? Has my whole life been a lie? Has HER whole life been a lie?? Is she going to take up scuba diving or skydiving or bull riding next?

I was sitting in my living room pondering these life-altering questions when my phone rang:

Me: Hey, mom!
Mom: Catchy - I've just been googling . . .
Me: Yeah?
Mom: And we could have DIED parasailing. I mean, it's VERY dangerous. I'll never do that again. There was a story on here about a man who was killed when his parachute went in the water. Listen to this . . .

And so I listened. With my eyes closed and a smile on my face, knowing that all was right with the world again . . .

I'm thinking your sister, Tammy,and I must have fed into her fear of the water with our little incident at the family reunion! Your blog really makes me laugh!

But what beautiful red toenails! I'm sure the scenery couldn't compare. :-)

I didn't remember you taking the pic of the warning label.....or that they helped you get the pic taken!!! I'm with you in the world is back in sync now that Mom has come back to her senses!