I really prefer to work out at my house - I've always been that way. The thought of going to the gym and working out in front of a bunch of people in spandex who are all there to judge me (that IS why they're there . . .) makes my arm pits sweat. And if you START your work out with sweaty pits, it's all downhill from there.

Yeah, the gym is a nightmare to me. You know, walking on the treadmill next to the girl who appears to be training for some sort of sprinting contest. Or holding on to the side of the elliptical machine, gasping for air, and hoping that the guy next to me won't see that I've only been on it for 2 minutes and 9 seconds. Or having to get the 10 lb weights in front of the guy who just benched 250 . . . aaaaaaaaaand then having to go back and get the 8 lb weights because 10 lbs was just a BIT too ambitious. These are all scenes out of a nightmare for me. A horror movie. My own personal Hell.

Until recently, I thought that was the worst possible way to work out. And then I met a friend of mine for breakfast in a little area called Market Street (lots of shops and some restaurants) and saw something way worse . . . I shall call it "Mommy and Me Boot Camp" because all the women in the class had a stroller with a matching toddler. And the strollers seemed to be utilized as part of the class, as if the class were designed around that concept: 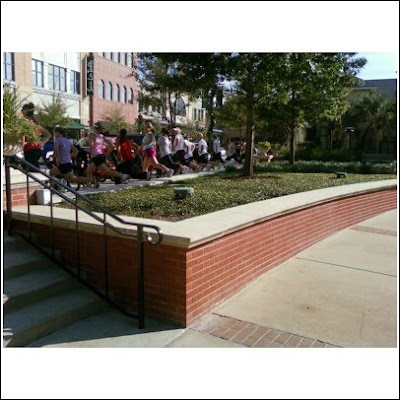 I felt awkward just walking BY them - there is no WAY I could do that in front of all those people walking around Market Street shopping. My heart is racing a bit right now just THINKING about it. It's the one time in my life that I found myself grateful that I didn't have kids and, therefore, did not have to think of a clever excuse to give in answer to the question "Hey - do you want to try this new Mommy and Me Boot Camp tomorrow?"

So no 24 Hour Fitness for me. No Gold's Gym or Bally's. And certainly no public shopping areas. Nope - I leave gym scene to my slightly exhibitionist friends and work out in my living room instead.

I recently switched from Hip Hop Abs to a new workout program called P90X. Have you heard of it? It's this really hard, super-intense 90 day program with lots of impossible moves and with the type of people who like to say "Bring It" and have push-up contests. You know the type . . .

Anyway, this new video is tough. And it makes me feel just as ridiculous as Hip Hop Abs did, but in a very different way: now I find myself yelling "WHAT?" and "How the HECK are you doing that??" and "I HATE YOU!" a lot at the television . . . it's really quite a difficult workout. For instance, for one of the moves you have to do a traditional push-up (i.e. no knees . . . i.e. impossible for me) and then, when you've done the push up, you lock your ankles together and roll to one side, making your body perpendicular to the floor and supporting yourself with your feet and one arm still in push-up mode. Having trouble understanding? Yeah - me, too. Here's a visual for you: 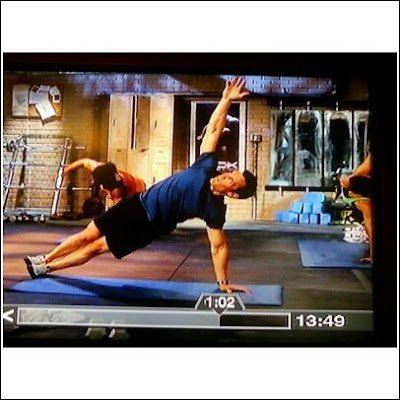 The first time I did this, I collapsed instantly and then actually heard my arm laughing at me. But I've improved each week and now when I collapse, my arm just cusses at me. So I think that's progress. You should try it sometime . . . someday when you're feeling really good about yourself and you think "You know what? I need a healthy dose of humility. I need to feel like a fool IMMEDIATELY."

Another thing you should do when you need a good dose of humility is get my mom to come sit in your living room and watch you while you work out. I had that honor the other day when she came over to watch Dancing With The Stars with me and got to my house while I was still working out. She just sat down in one of my chairs and played on my laptop while I kept plugging along with my DVD. I thought that she was otherwise occupied with email and various websites until I was suddenly treated to a running commentary: "Get your butt down. Your butt's too high. Look at him - his butt's down. Your arm should be coming up a little more. They're bringing their arms higher than that. No. No. Look at them - they're twisting their arms more than that. See? Twist. Twist. See?"

I tried to ignore her at first. Then I thought about saying something mature like "If you think you're so good, why don't YOU get down here and try it?" Then I thought about hitting her with my hand weights to make her quiet down. But I decided against that because, in the event she was seriously injured by my attack, I didn't want Exhibit A in my subsequent trial to be a set of 3 lb weights. That would just be embarrassing.

So I just decided that my best option would be for me to just get my workout done before she comes over to watch TV with me.

Or borrow a baby and a stroller and go work out at Market Street . . .

Oh, so many truths in this one! But Exhibit A in your murder trial might be the most funny!!

Occassionally I get the feeling that I should exercise, but I just lay down until the feeling goes away... (Mark Twain)...

That was good, Catch! Still can't get that push-up thing!