Adventures on a Tornado Tour - Part 5

Here's my report from Day 5 of my tornado tour from this Spring. Don't forget to DVR Storm Chasers on the Discovery Channel this SUNDAY!!

Today was lots of fun. We met downstairs in the lounge at 11 and we had to wait around a little for Reed and Chris. It's really interesting watching the Discovery people filming them because it's pretty staged. For example, both Reed and Chris were outside talking to us and then, when the production crew gave them the high sign, they went back in with their bags just so that they could walk back out and get in the car for the cameras while having a staged conversation about the chase plans for the day: 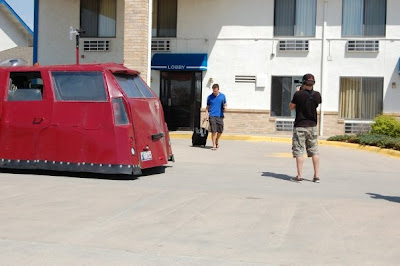 Then they pulled out of the parking lot while the crew filmed but came right back in the parking lot and waited around for another 15 minutes or so while the production crew loaded up their truck. Then we went and ate breakfast at a local restaurant. Reed and Chris were sitting at a table right next to ours and the production crew had to film them talking about their game plan for the day: 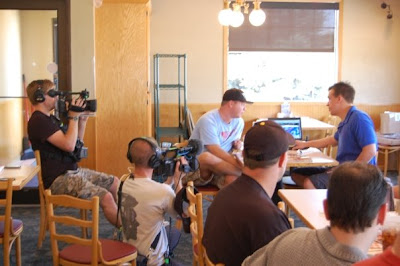 It's so weird to see how staged it really is!!! I mean, the chasing is real but the conversations? Not so much . . .

We left from breakfast before Reed and Chris did and we hit the road to catch some storms that were going to be happening up north. We stopped in a town in Nebraska (now I've forgotten which one) and waited to see what the storms were doing. It was cool to watch the clouds just pop up. I've never noticed it before but you can actually watch the clouds develop - they just start popping up like popcorn! They started like this: 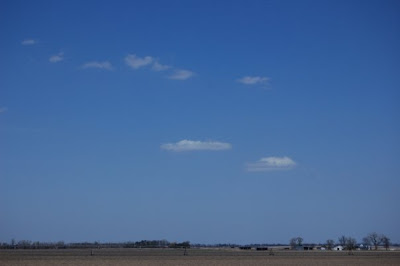 And developed into this: 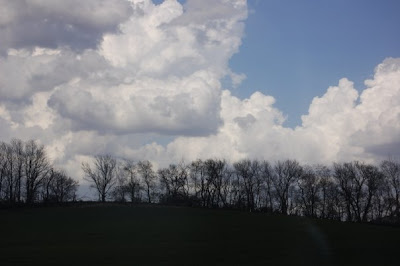 We were stopped for about 30 minutes, just hanging out and stretching our legs. Matt decided it was time to head North so we piled in and drove to Southwestern Iowa. On the way, we met up with Reed and Chris and joined the convoy of the SRV, the production vehicle, and the mechanics. We pulled over on the side of the road to look at the clouds forming (which was actually way more interesting than it sounds!) and, you guessed it, stage some shots for Discovery: 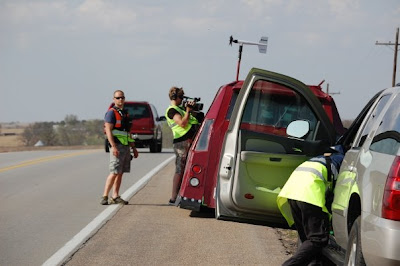 We decided to break off from Reed at that point and chase on to Iowa because we figured we'd go a little faster without the Discovery crew tagging along.

Unfortunately, all the storms we chased just evaporated as soon as we got there. Reed and Chris went a little further south from us but the same thing happened to them. We got a little rain but no hail. But we DID get some awesome lightning shows. I'm sure it's no different from any lightning I've ever seen BUT out there in the WIDE open with no trees or buildings to obstruct your view, it is AMAZING!! You can see the lightning connect with the horizon and then just pulse over and over. It was downright blinding at times!!! So that was cool.

We have to head to the Texas panhandle tomorrow so we needed to get to Wichita, KS for tonight. So we hit the road. Along the way, we took a heretofore unprecedented "fart" stop for Shane which added to his ever-growing charm. He had made the announcement/fart-stop request by saying: "I'm just telling y'all right now that I'm building up something big here and I'm gonna have to relieve myself. I'm cramping up bigtime."

So now we are in Wichita and will be heading Southwest tomorrow. They are still saying that tomorrow is gonna be HUGE and Matt said that there's almost a guarantee that there will be tornadoes - we just have to pick the right storm.

Aaaaaaaaaand make sure that we make the appropriate number of . . . ummmmm . . . stops for Shane.