Adventures on a Tornado Tour - Part 6

Here's my report from the six day of my tornado tour! Don't forget to watch Storm Chasers this Sunday night on the Discovery Channel!!!

Ok, today was sooooooooooooooooooo fun . . . well, after I hauled myself out of bed after only 3 hours sleep! We stayed in Wichita last night and had to head to Southwest Oklahoma or the Texas Panhandle so we had to get a pretty early start. We hit the road and drove like the wind to Erick, Oklahoma. We pulled into a gas station and saw the T.I.V. 2 (Tornado Intercept Vehicle). The TIV is the brainchild of this director named Shawn Casey who was on both seasons of Stormchasers. He's super strange and kinda bugs on the show and his vehicle is notoriously unreliable, breaking down all the time. It was kind of cool to see it in person.

Reed, Chris, and Joel pulled into the parking lot, too, and then it was time for the intercept vehicle show down! They parked next to each other and checked out each other's vehicles and chatted for a while. You can tell that Shawn doesn't like the SRV - I couldn't hear what he was saying but I could tell from the body language! Can't wait to see the show to hear what he was saying. 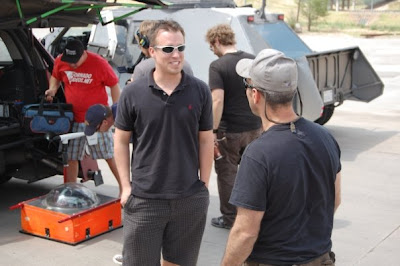 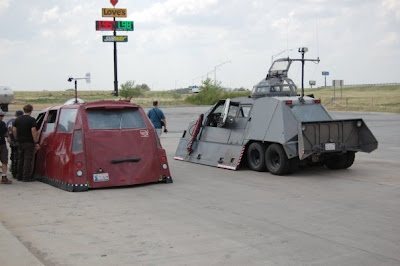 The TIV is built around a chassis of an old truck (I think) and it's really heavy and totally impracticable. Plus, the chassis is the only part of the original vehicle remaining under the structure of the TIV. The SRV, on the other hand, is basically just an armor-covered Tahoe. That's really simplified but the point is that it drives like a Tahoe and is much a much better-designed vehicle. In fact, 10 minutes after the TIV left the parking lot, it broke down and they are having to get another vehicle. Shawn is gonna hate the SRV running circles around him! It should be an interesting season!! :)

So then we left the parking lot and started our chase. Shane encouraged Eric by telling him that he has nuts that clank. Man, I'm so glad I'm not a guy. Shane also said that he has never been on a roadtrip with so many people he doesn't know. Thank GOD his victim pool is so limited!! It was an interesting day with him, actually. Within the same day, he was the most intolerable he's been yet and then, an hour later, the most enjoyable he's been so far. But every time he opens his mouth, my butt clenches.

We saw lots of awesome storms today and saw some funnel clouds that dissipated before anything came of them. It was lots of driving like the freakin' wind and hearing Matt freak out when he saw something significant. It was a REALLY fun day - I'm so glad that I came on this trip!! Tomorrow should be an awesome day for us - Matt and Dave said it could be the best day for chasing in the last three years. There should be LOTS of tornadoes and even some strong ones.