I've been nauseated off and on this week and haven't been able to figure out if it's because of something I ate or if it's some sort of stomach bug. But whatever it is, it's annoying - I've been dealing with it since Monday and I'm over it. Yesterday I was out with my mom and sisters for a belated celebration of Erin's birthday when I was overcome again with nausea and had to go lay down in my sister's car while they all shopped. Luckily, my mom had some chewable Pepto Bismol tablets with her so I took those and, after a little while, the nausea seemed to subside and didn't really resurface for the rest of the night.

This morning I woke up and walked to my bathroom, feeling fine for the first time this week. I brushed my teeth and, when I went to spit the toothpaste out, I noticed that my toothbrush was covered in gray, as if I had something gray in my mouth. I opened my mouth and, sure enough, my tongue was black.

My freakin' tongue was buh-lack.

I quickly racked my brain, trying to remember if I had eaten anything purple or dark the night before that would have turned my tongue that color but I hadn't - I had eaten only bread and Sprite that night because of my nausea. My heart started racing as I began to convince myself that I was obviously turning into a Chow or suffering from some rare disease that makes you nauseated and then turns your tongue black - either option meant my future was bleak. Just as I was nearing the panic zone, I decided to take a pro-active approach to this problem - I rushed downstairs, pulled my laptop out, and Googled "nausea black tongue."

One of the first search results that caught my eye on the page said something about a "black hairy tongue" and I heard myself scream "NOOOOOOOOOOOOOOOOOO!!!" - this worst case scenario! But then I was amazed at how quickly I became resigned to the curse of a hairy tongue. I slowly shook my head, and slumped down in my chair, recalling fondly the days of old with my hairless tongue. But then my head started spinning as I began to think of all the things I needed to do: call my family to explain why I had to go into hiding immediately, write my boss to let her know that I wouldn't be returning to work, and find a cave in a remote location in a third-world country where my hairy tongue and I could live in peace, free from persecution. And just as I was about to google "how to french braid your tongue hair" I saw the other Google results, all of which mentioned that Pepto Bismol can make your tongue turn black.

I was simultaneously relieved and disappointed - I mean, after all, I had already come up with some cute decorating ideas for my cave AND my tongue that were now useless to me. But then I saw THIS picture on Google images: 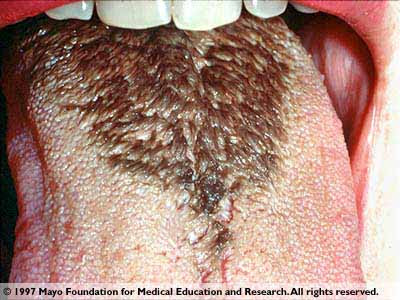 Aaaaaaaaand then I just felt relieved.

That literally just happened to me 15 minutes ago. I walked into the bathroom (feeling just as sick as the night before but I too had eaten 2 PeptoBismol tablets !!!) and my tongue was BLACK !!! IIIII almost had a heart attack.. Showed my mom and she gasps.. -.- Thanks Mom... i managed to scrape most of it off except the black all the way in the back of my tongue. My mother insisted it just must've been the Pepto. My thoughts *Likely story ! Then I google'd it.... She was absolutely correct !!! ^_^ And your story definitely confirmed it ! <3 Thanks