I've been a little troubled by how anatomically correct mannequins have become. Have you noticed this? I certainly have . . . it's gotten so bad that now I feel like a bit of a pervert when I window shop. I find myself looking at the mannequins and self-consciously justifying my glances by saying things aloud like "Wow - I really like that shirt! I think I might get it! Especially now that I know what it'll look like on me if it's a bit chilly outside . . ."

Seriously - is it THAT important to be THAT anatomically correct?? Can we not leave some details to the imagination? I just don't get it - it's yet another reason I don't fully understand the fashion industry.

But as of this weekend, I think I might not understand the food industry, either. And, even worse, I might not fully understand my very own Lupe Tortilla. And that cuts me to the core.

Now most of you know by now that I love Lupe Tortilla. Whoever Lupe is - whereEVER she is - she is my soul mate. And, no - I don't need to meet her first before I make that decision . . . I have met her beef fajitas and that was good enough for me. They complete me, friends.

This weekend, I ate lunch there with my friend Diana. We were sitting by the kitchen in a corner on the left-hand side of the restaurant and we noticed that there was a statue of a bull on a ledge just above us as we ate. Its head was facing me and its hind quarters were facing Diana and, as we were eating, Diana happened to look up at the statue, only to discover something a bit disconcerting . . . the bull was a little TOO anatomically correct: 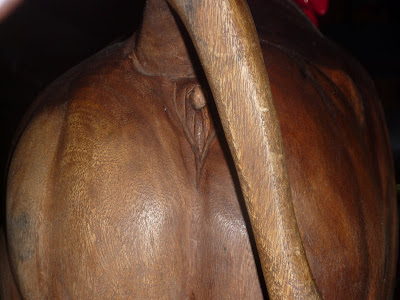 Seriously?? Why is this necessary? Why is this detail important? And why did the restaurant decide to stick this giant bull and his giant . . . well . . . pooper . . . out among people who are eating? I don't care who you are, you can't see this and maintain your pre-pooper-sighting appetite. It's disturbing.

Lucky for me I was on the front end of this little masterpiece so I didn't have to stare at his dung hole while I ate my fajitas. But something tells me I would have pushed through even if I had been. Because I love those fajitas so much.

And nothing - not even bull sphincters - can stop that kind of love.

Posted by Catherine at 1:03 AM

Too funny! You can see it even more clearly when there is a bright light illuminating it! Yikes!
BTW, there is not just one of those bulls but another one on the opposite end of that section.

Too funny! You can see it even more clearly when there is a bright light illuminating it! Yikes!
BTW, there is not just one of those bulls but another one on the opposite end of that section.

The carving is of a vagina, though it is where the anus should be.

Actually on a cow, that is where the vagina would be, with the anus just above it right below the tail.

Yep it’s a cow and that is a vagina.