I wish I could say that I am 100% drama-free, I really do. I've always wanted to be one of those girls who just never has a dramatic moment. But the truth is that I have an undeniable inner drama queen. Now, luckily, she stays in hiding most of the time but every once in a while she comes out and reveals herself in a big way . . .

Like when I had to clean my Beta fish's tank for the first time. I had gotten this fish for my birthday and he lived in a pitcher of water on my bar. When I could no longer see him through the haze that had built up in the water, I thought it might be time to clean his little tank out. But this petrified me to no end. I was convinced that he was going to jump out of the tank and attack my neck - like a scene right out of some bad B movie. And I knew it was an irrational fear but I just couldn't help it - I was paralyzed with fear. So I called my friend Tracy and made her stay on the phone with me while I cleaned the tank . . . you know - in case she needed to call 911 to help get little Finnegan off of my jugular. ANYWAY, I cleaned the tank but screamed LITERALLY every 2 minutes and Tracy stayed on the phone with me the entire time, laughing hysterically at me. But, hey, she can laugh all she wants - those fish are SCARY . . .

Or there's the time that my mom and sisters and I were all in the living room and my mom kept asking me to do stuff for her, even though my sisters were sitting right there, too . . . and, in some cases, they were in a more convenient position to do whatever task was being requested. I was getting so frustrated because CLEARLY I was being picked on because I was the middle child - am I right, middle children?? Are you with me on this one?? ANYWAY, at one point my mom asked me to turn the air up even though Tammy was RIGHT next to the thermostat and I was clear across the room. Well, that was the straw that broke the camel's back for me. I stood up and, in my best stage voice, yelled: "Catherine, get me some water! Catherine, get me a blanket! Catherine, turn the air up! THROW ANOTHER LOG ON THE FIRE, CINDERELLA!!" Dramatic? Yes. But, seriously . . . Tammy was RIGHT THERE.

Look - I really do wish I weren't so dramatic at times. But I realized a long time ago that, as much as I'd like to get rid of my inner drama queen, I can't. Because it's genetic. Case in point . . .

My mom used to bring us breakfast in bed on cold mornings when we were in school because she didn't want us to have to come downstairs and freeze are tootsies off - yes, she IS the greatest mom EVER. Well one morning, after I had finished my cereal and and was finished getting ready for school, I started down the stairs with my cereal bowl in hand, being careful to not slosh the left-over milk all over the place. But, unfortunately, when I was about halfway down the stairs I slipped. Well, actually, "slipped" sounds a little too dainty. What really happened is that my feet flew out from under me, I flew up in the air, my cereal bowl flew out of my hands, I came crashing down onto the stairs, and my cereal bowl crashed against the wall on the landing at the bottom of the stairs. Milk and Cinnamon Toast Crunch bits began dripping down the wall and, before I even had time to assess myself for injuries, my mom came running over to the stairs screaming hysterically because she thought that the milk and cereal on the wall were my brains.

I was so dumbfounded at her reaction that I just looked at her with a confused expression and, with as much compassion as I could muster, I asked "HOW DOES CINNAMON TOAST CRUNCH EVEN REMOTELY LOOK LIKE BRAINS??"

Now, in an effort to cover up the fact that she mistook cereal for brains, she tries to tell everyone that it was oatmeal on the wall. But don't believe her . . .

And then there was the time when I came home from school and found a water leak in the house that my mom had somehow missed. I can easily see how she could have missed it, what with the huge water spot on the ceiling downstairs and the water standing on a downstairs cabinet. Once I pointed it out to her, she completely lost her head. She had us all go outside because she was convinced that the house was going to blow up . . . because . . . well . . . I guess because . . . no - I still don't know why she thought a water leak would lead to an exploding house. But she did. And the best part was that she kept having ME go inside to call my dad or the plumber . . . whiiiiiiiiiiiile she stood outside, safely distancing HERSELF from the blast zone.

But, hey - at least she brought us breakfast in bed, right??

The reason I'm writing about all this tonight is that I saw my mom's inner drama queen again last night. We were at my sister Tammy's, having a lovely dinner that my niece Emma prepared for us and my mom was telling us that one of her nails had broken. She was really hoping to get it repaired at her nail place the next day but she needed to protect it in the meantime so that the break didn't get any worse. Her solution for a slightly broken nail? 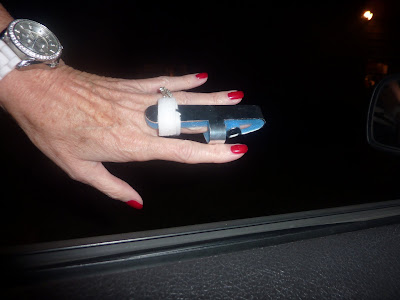 Yep - I come by my dramatic streak honestly, don't you think?

"Now, luckily, she stays in hiding most of the time"
As someone who worked with you for over a year, i can safely say, "Catherine, no. No it does not." But THAT'S why I LOVE you!