The other day, my 7-year-old nephew Ben made an appetizer for their family meal. This was very exciting for him because he wants to be a chef one day and LOVES helping in the kitchen. So Tammy thought it would be a fun thing for him to do and she gave him complete creative license - she would supervise him but, other than that, he was allowed to create and prepare whatever he wanted without interference from her. He took this responsibility to heart and worked very hard to prepare what would essentially be his big cooking debut.

And what he came up with was a unique appetizer, heretofore unheard of in civilized nations: 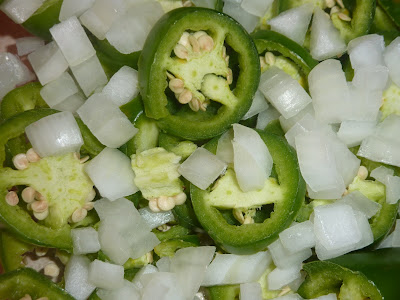 Yep - that's right. Onions and jalapenos. That's it. A relish of sorts, straight from the pits of Hell.

When dinnertime came, Ben proudly placed his glass bowl of onions and jalapenos on the dinner table for all to enjoy. While the others politely avoided the bowl and opted for other dinner items that were less, well, painful, Ben dug right in and began eating onions out of the bowl. Tammy was trying so hard not to laugh so, to distract herself, she turned her head away from Ben and began talking to Emma. But a few minutes later, Tammy looked back at Ben and noticed that he was silently crying. At first she thought it was because the air was so filled with onion and jalapeno fumes that it was just making him cry. But she quickly realized something else was going on so she asked him what was wrong and, with bright-red lips, he told her that his lips were burning.

So Tammy jumped up and got him a wet washcloth and some ice to cool his lips off. Pretty soon he had water and drool running down his chin but his lips had cooled off and his tears had dried up. So they all went about the rest of their meal and continued visiting as a family.

Uuuuuuuuntil Tammy looked over and noticed that Ben was silently weeping again.

She asked him if his lips were still hurting and he shook his head, tears still streaming down his face. So she asked him why he was crying and that's when he took the ice cube off his lips and wailed "NOBODY'S EATING MY APPETIZEEEEEEEEEERRRRRRRRR."

Apparently, it just hadn't FIRED up everyone's appetites like he had planned . . .

This, quite honestly, might be one of the funniest things I've ever read! Bless his heart!