I've been watching a lot of Fox News Channel lately (pause to let some of you groan and turn your CNN up). I'm trying to keep up with all the debates about the national debt crisis and to find out what's gonna happen - are they gonna raise the debt ceiling? Raise taxes? Cut spending? Default on social security checks? Set me up with Rick Leventhal or a cute senator? I just don't know. That's why I tune in.

The other night, I was watching The O'Reilly Factor. Normally, I don't watch that show because everyone just argues and talks over each other and I just end up rocking back and forth in the fetal position, sucking my thumb. But I watched it the other night and Bill was talking with Karl Rove about the debt ceiling and was asking what Karl (can I call you, Karl?) thought the solution should be. I was glad to hear Karl's opinion. After all, he was a part of the Bush administration and I tend to identify more with the conservative point of view (pause to let some of you groan and turn your CNN up more).

He began giving his thoughts on the problem and they made sense to me. I was actually following it, which was a first. Then, he held up a dry-erase board with some notes on it intended to clarify his point. But my eyes zeroed in on the first word and I heard nothing else that he said for the next five minutes . . . 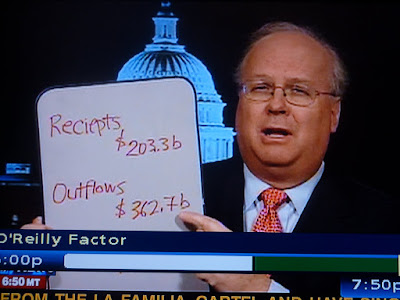 Come on, Karl. Don't you know my brain shuts down with these kinds of spelling mistakes? How can I focus on the debt crisis if I have to deal with a SPELLING crisis, too?? I need to understand this debt ceiling thing and now all I can think about is "i before e except after c." It just keeps playing over and over and over in my head. Like a manic chant. I expected more from you, Karl. I really did.

Maybe George W. should have had implemented a "No Politician Left Behind" initiative instead . . . ?

I love that incorrect spelling drives you insane, because it drives me crazy,too! I especially hate misspelled words on outdoor signs, banners, t-shirts, memos to the company...I could go on and on. It's just such an easy thing to check BEFORE you publish it, and it just makes such a big difference in how ones intelligence is perceived. If you see me misspell something, rest assured it's because I can't type, not because I can't spell. haha