A few years ago, the guy who had been doing my yard just stopped coming. When I tried to call him, I found out that: 1) the number I had was for his business cell for his REAL job, 2) he had been fired from said REAL job, and 3) I had no way of contacting him. I asked around and a friend of mine gave me the number for HER yard people so I called them and asked if they'd come by and give me a quote for doing my yard. That guy told me he would come over to give me an estimate and then he called me 10 times asking for directions and then just never showed up. It was a bad day for me.

I called my sister Erin and asked her if she liked the guy who cut her grass and, if so, could I have his phone number. And that's when I called Gustavo and he came right over, gave me a quote, and started being my yard guy/"boyfriend" (what? He doesn't have to KNOW he's my boyfriend . . . GAH.). Little did I know that such a minor, mundane thing as switching yard guys would lead to to the birth of my inner stalker.

Erin, like me, thinks Gustavo is super sweet so she understands my little crush. However, UNlike me, she's married and doesn't spend her time calling him "Gusty" or staring out the window watching him trim a Crepe Myrtle.

How BORING is married life, right??

ANYWAY, she sent me a picture the other day that I thought was awesome. She has an in-house daycare and has lots of SUPER cute kiddos she watches. And the other day, when Gustavo was there mowing Erin's yard, one of the kids showed that he is a boy after my own heart: 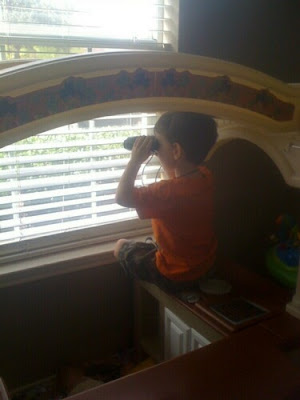 Man. You have NO idea how jealous I am that he can get away with this. I bet no one would call HIM "strange" or "weird" or "psycho stalker." Dang double standard.

I wonder if he's old enough to handle a high-speed camera . . .

Too funny!! Love the camera idea!

That's hysterical. I'm dying to see a pic of this guy. :)