A few months ago, an artist friend of mine invited me to an art show in which one of her pieces was going to be on display.  It was really a big deal because the show was showcasing pieces from the rising artists in Texas.  So, understandably, she was SUPER excited that her piece had been chosen.  And I was honored to be invited.  I asked if my mom and sisters wanted to go but my mom was the only one who was able to.  So I got dressed in my best I'm-going-to-an-art-show-and-I-don't-really-know-how-to-dress-for-it" attire, picked up my mom, and headed downtown for the art show.

You know, I never go to art shows.  They're just not on my list of activities that I enjoy.  I think the main reason is that I'm just not deep enough.  I mean, people who enjoy art shows can stand around and stare at a painting for hours, analyzing and re-analyzing, discussing minute details, and hypothesizing about the artist's intent and relationship with his mother.  I walk up to the painting, say "Oh! Cute dog!" and then walk on to the next.

Art show people would roll their eyes at me.

As I walked into my friend's art show, I took a deep breath and hoped that I would "get it."  That I would see a painting and be able to say something like "Isn't it amazing how the artist captures the essence of truth here?"  You know - so that I would fit in.

Instead, I walked in and saw this: 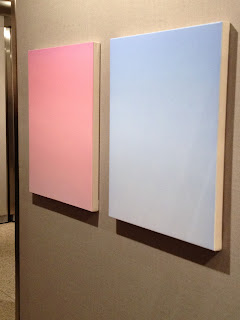 I thought for a second that someone had hung a couple of over-sized paint chips up on the wall to help them determine if the room should be painted pink or blue. Perhaps the gallery was going to be turned into a nursery.  I thought it an odd time for a remodel, what with the art show going on and all.  But then I noticed three people standing in front of these paintings, tilting their heads to the right and then to the left, and discussing the paintings in detail.  I got behind them and tilted my head to the right, thinking that maybe the painting would make sense to me if all the blood rushed to one side of my head.  No such luck.  So I just nodded along with what the others were saying and mumbled something art-showesque like "I've never seen breath captured on canvas quite so exquisitely."  Then I moved on to the next one, hoping I'd have better luck. 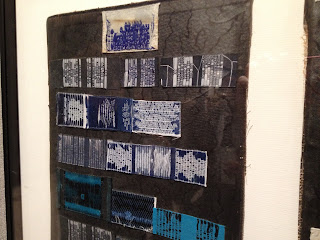 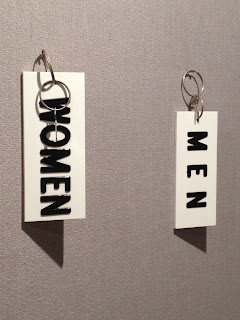 Some paintings are kind of cool to look at but I don't really get the names of them.  For instance, this really cool-looking one was called something like "Richard Nixon Abroad." 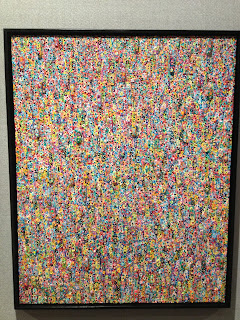 I get the "Richard Nixon" part but not the "abroad" part.  Just kidding - I don't get either part.  I just didn't want the art show people to roll their eyes at me.

Then there was this one. 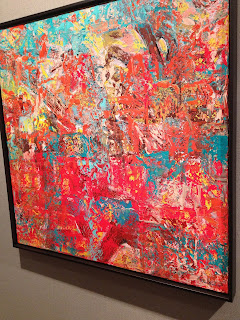 I really liked the colors and the patterns created by the strokes.  But it was called something like "Travels through China" and I didn't get it.  I studied it closely to try to figure out why the artist called it that.  But I just got a headache.  And a hankering for Kung Pao Chicken.

Despite my confusion over some of the pieces, there was some really cool art in that gallery.  I discovered that I like "mixed media" pieces - paintings that combine different art media like ink, paint, and collage.  My friend's painting was a mixed media painting and it was really interesting - interesting in a good way.  And I discovered that night in that gallery that I enjoy an art show - it's a fun way to spend an evening.

On our way out, I saw a collection of trash that people had left on a block. 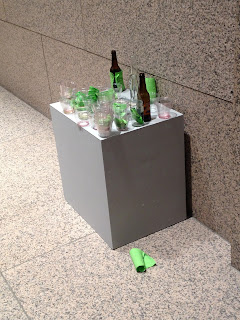 And I thought for a moment that I should stand by it and say that it was my entry into the art show.  And tell everyone that it's called "Frisbee in the Park."

Posted by Catherine at 1:49 AM

Oh mah goodness, that was hilarious! Because yeah, that's totally me. I just don't get it. I actually thought that pile of trash was an art display before you said it was indeed just trash. I can't tell the difference between it and what's on the walls! lol The blue and pink ones kill me the most though. Seriously???