This past weekend I went to a local Wine and Music Festival with some friends of mine in a town called Montgomery.   It was a lot of fun.  We sat around and listened to live music, tasted different kinds of wine, ate kettle corn, and watched a cooking demonstration.  Oh and I signed up to receive a quote from Liberty Mutual.  Not because that's what people normally do at a wine festival but because I can't say no to people who are working booths at events like that.  It's a problem.

After we watched the cooking demonstration, we walked around downtown Montgomery and went into a few of the local shops.  One of the stores we went into had a lot of interesting, eclectic things that I had fun looking at.  At one point when I was in that store, I was standing by a woman and her husband and it quickly became obvious to me that she had had too many "samples" of wine.  I silently judged her, wondering how someone gets that drunk off of wine samples in the middle of the afternoon.  Why couldn't she be more like me and my friends, slowly sipping on her wine, enjoying the day, not overdoing it. I was feeling pretty self-righteous.

That's when I looked up and saw this: 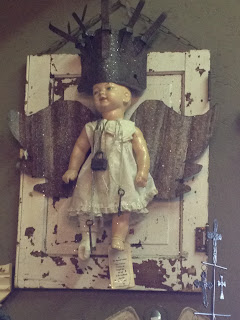 Aaaaaaaand then I pulled out my phone to sign myself up for the next Alcoholics Anonymous group.  Because clearly I was having some sort of alcohol-induced hallucination.  That was the only possible explanation.

So I took a picture and hoped that later, when I looked at my phone, I would find that I had actually taken a picture of a nice drawing or piece of art and that I had imagined/hallucinated the strange baby king door doll.  So you can imagine my horror when I pulled my phone out and BAM!

THERE IT WAS AGAIN.

This is positively disturbing.  I just don't understand it.  I know that art is open to interpretation but I think the only interpretation for this one is psychotic personality disorder.  And I wonder if there is really a market for this type of thing.  I can't see it.  I mean, I CAN see someone starting off a conversation with "You know what would be great on that big wall in my living room?"  But I CAN'T see them finishing that with "A distressed door with a horror-movie-type doll wearing wings, a crown, one sock and keys around her shoulders.  How perfect would THAT be in my living room??"

Well, I guess to each his own.  But promise me this: if you buy this and put it on your wall in your living room, give me a heads up.  Because that thing could give me a heart attack if it catches me off guard.  And that would NOT be good.

Not until I get my insurance quote back from the guy at the festival . . .