This weekend, my sisters and I went to dinner at Lupe Tortilla (a/k/a the best Mexican restaurant EVER) for some fajitas and some quality time together.  But mostly for the fajitas.  Emma and Ben, my 11-year-old niece and 8-year-old nephew, also joined us for the evening.  While we were eating, we started chatting about our favorite books and favorite movies and, at some point, I was talking about how I had read the Lord of the Rings books when the movies came out and how surprised I was that I liked the books as much as I did.  Ben got very excited and said "Oh!  Catchy!  I've been wanting to watch those movies!  Are they too scary for me??"

Now, I haven't seen those movies in years but I remember that I really liked them.  I sat there for a second and tried to remember as much of the movies as I could to decide if they were too scary for little Ben to watch.  I told my sister that I thought they had some scary parts, that the whole story line is about good vs. evil and there are some pretty scary characters on the side of evil, but that I didn't think it was anything that he couldn't handle.  So we made the decision to have an impromptu Lord of the Rings slumber party at my house.  So Emma and Ben jumped in my car and Erin went to pick her kids up from their little friends' house and we planned to rendezvous back at my house.

This was VERY exciting.  Mostly because we used the word rendezvous and that makes everything seem more exciting.

That's when I began to worry that I had underestimated the scariness of the movies.  I had a feeling that I was forgetting something that would be a game-changer so I felt it incumbent upon me make sure that Ben understood that the movie might be scarier than I had initially represented.  So, on our way to my house, Ben and I had this little conversation:

Me: You know what, Ben?  I'm a little worried that these movies might be a little scarier than I remember . . .
Ben: I don't think I will be scared, Catchy.  I think it will be okay.  I mean, I watched Scrooge and had nightmares for three nights but I don't think that will happen this time.
Me: Weeeeeeelllllll . . . this is gonna be a LITTLE bit scarier than Scrooge, buddy.  I mean, there are some pretty scary characters in this movie.
Ben: No, it's okay, Catchy.  I promise.  You know how I know?  Because I saw the real live Scooby Doo movie and it was scaaaaaaaaaaarrrrrrrrrrry.  But I pushed through it.  So I'll just push through it on the Lord of the Rings, too.
Me: [gulp] Hmmmm . . . I don't know, bud.  This is gonna be just a WEEEEEEEEE bit scarier than the Scooby Doo movie.
Ben: [shaking his head] I don't think so, Catchy - that one was PRETTY scary . . . [looking at me knowingly].
Me: Oh boy . . .

As it turns out, I had COMPLETELY forgotten about how scary those movies are.  I mean, there are these horrible creatures that I had forgotten about called orcs and they are positively terrifying. I spent half the movie saying things like "Oooooo - don't tell your mom about THAT!" and "Oh geez - I forgot about THAT guy . . ." and "I'm scared - somebody hold my hand!" Luckily, though, the kids did NOT think the movies OR the orcs were too scary and they absolutely loved our Lord of the Rings marathon.

And, in case you were curious, we DID confirm that the Lord of the Rings is MUCH scarier than the live action Scooby Doo movie. 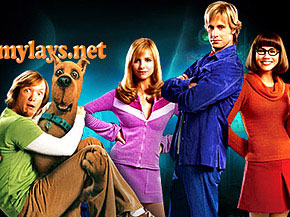 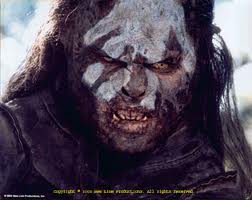 Preeeeeeeeeeetty sure we have a clear winner.

Now aren't you glad that I'm not an aunt to YOUR kids?

Posted by Catherine at 2:25 AM

Ola read the books when she was 8 - she loved them.