This weekend I found myself in Chicago. You know - the Windy City. Chi-Town. The City of Big Shoulders. I took a break from my j-

What? Yeah, I know - that's such a weird nickname, isn't it? I have no idea where it comes from - I didn't see a particularly large number of Big Shoulders while I was there so your guess is as good as mine. Frankly, I think it's a bit offensive. But it apparently IS a nickname for Chicago, at least according to Wikipedia. I probably should have just left that one off, though, huh? Let me start over, okay?

This weekend I found myself in Chicago. You know - the Windy City. Chi-Town. I took a break from my job and headed north to some cooler, breezier weather and, let me tell you, it did wonders for my stress level AND my hair . . . 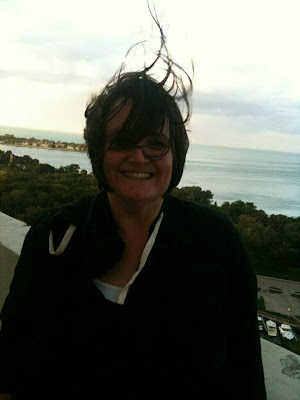 The goal of our little trip was to de-stress and spend time with my mom's side of the family. And we had the greatest weekend. I really don't remember the last time I laughed as hard as I did with my aunts, uncles, and cousins. It was SO much fun. And, as usual, my mom provided me with a good little story to tell you . . .

My mom has always told us about how she used to have to walk to and from school uphill both ways in 10 feet of snow, blah, blah, blah. So this weekend, she decided that she wanted to take us on her old walk so that we could see how far she really had to go to get to and from school each day. My uncle dropped us off at the house where my mom grew up - which was pretty cool to see in person - and then we all started walking toward her elementary school, Our Lady of Mt. Carmel. We walked down her old street and up to a busy intersection where we turned right and started walking along the sidewalks that ran in front of the various businesses lining the busy street.

And thus began the long walk to my mom's old school.

As you can imagine, the neighborhood has changed in the intervening years - the old drug store where my mom used to stop and buy candy has long-since closed up and been replaced. Same with all the other businesses that my mom used to pass each day as a young school girl. Instead, we passed by several gay nightclubs and at least one shop that sold adult, ummmmm, items. In fact, the display in the window was like everything you'd need for a Bachelorette party, including something called a "Wiggly Wand." I'll spare you the description on that one and let you use your imagination. Unfortunately, we were already peering into the window of the shop before we realized what types of wares they were peddling. Before we pulled my mom away, she had already spotted said "Wiggly Wand." Fortunately, though, she hadn't really seen what it was. Phew, right?? Not so much. Because UNfortunately, she kept asking all of us questions like "What IS a Wiggly Wand?? I don't get it."

Because I didn't think that the authorities of the great city of Chicago would appreciate me curling up into the fetal position on their sidewalks, I just ignored my mom, giggled maturely with my sisters, and kept walking.

I know. I know. It made sense to HER, though.

Just as I was thanking to Good Lord that my mom had miraculously misread the name of the game, she started saying excitedly "We should go get one of those for the kiiiiiiiiiids!! They would think that's HILARIOUS! Pinning the ponytail on the fireman?? C'mon! They'd LOVE that!"

Frankly, I think I preferred it when she was asking about Wiggly Wands. There was less potential for CPS involvement.

We grabbed my mom by her elbows and quickly ushered her away, shielding her eyes from the "Shower Contest" advertisement in the window of a club we passed. Because, contrary to what the title might imply, the photo on the ad suggested that the contest was NOT about how efficiently you lather, rinse, and repeat. What a disappointment - I would have been a shoo-in for that one.

Finally, we got to Mt. Carmel and I had to admit that my mom had to walk a LONG way to get to school each morning. It's pretty amazing that she and her brothers and sisters made that long trek each morning as children - my how times have changed. Part of me wished I could wave a wand (but not of the wiggly variety) and be transported back in time to see my mom as a young girl standing in front of the steps of Our Lady of Mt. Carmel. But, for a few minutes on Friday, I got to see at least a glimpse of what life was like for my mom back then. As we started walking up the steps to go inside the school, I looked at my mom and really took the moment in. And I have to say that it was pretty cool.

Uuuuuuntil she turned to me and said "We really SHOULD get one of those Pin the Ponytail on the Fireman games for the kids."

Hog Butcher for the World,
Tool Maker, Stacker of Wheat,
Player with Railroads and the Nation's Freight Handler;
Stormy, husky, brawling,
City of the Big Shoulders:
They tell me you are wicked and I believe them, for I have seen your painted women under the gas lamps luring the farm boys.
And they tell me you are crooked and I answer: Yes, it is true I have seen the gunman kill and go free to kill again.
And they tell me you are brutal and my reply is: On the faces of women and children I have seen the marks of wanton hunger.
And having answered so I turn once more to those who sneer at this my city, and I give them back the sneer and say to them:
Come and show me another city with lifted head singing so proud to be alive and coarse and strong and cunning.
Flinging magnetic curses amid the toil of piling job on job, here is a tall bold slugger set vivid against the little soft cities;
Fierce as a dog with tongue lapping for action, cunning as a savage pitted against the wilderness,
Bareheaded,
Shoveling,
Wrecking,
Planning,
Building, breaking, rebuilding,
Under the smoke, dust all over his mouth, laughing with white teeth,
Under the terrible burden of destiny laughing as a young man laughs,
Laughing even as an ignorant fighter laughs who has never lost a battle,
Bragging and laughing that under his wrist is the pulse, and under his ribs the heart of the people, Laughing!
Laughing the stormy, husky, brawling laughter of Youth, half-naked, sweating, proud to be Hog Butcher, Tool Maker, Stacker of Wheat, Player with Railroads and Freight Handler to the Nation.